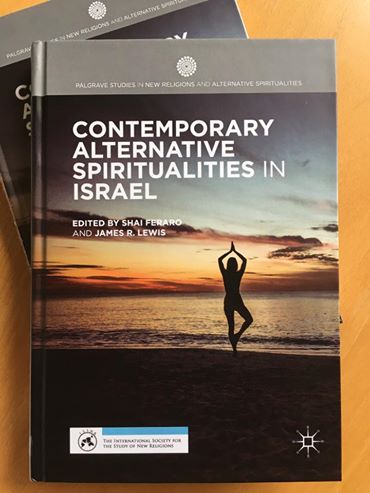 “This volume is the first English-language anthology to engage with the fascinating phenomena of recent surges in New Age and alternative spiritualties in Israel. Contributors investigate how these New Age religions and other spiritualties—produced in Western countries within predominantly Protestant or secular cultures–transform and adapt themselves in Israel. The volume focuses on a variety of groups and movements, such as Theosophy and Anthroposophy, Neopaganism, Channeling, Women’s Yoga, the New Age festival scene, and even Pentecostal churches among African labor migrants living in Tel Aviv. Chapters also explore more Jewish-oriented practices such as Neo-Kabballah, Neo-Hassidism, and alternative marriage ceremonies, as well as the use of spiritual care providers in Israeli hospitals. In addition, contributors take a close look at the state’s reaction to the recent activities and growth of new religious movements.”

A Sacred Time in the Sacred Land: Authenticating the Past in New Age Judaism – Werczberger, Rachel

Kabbalah Through the Utilitarian Prism: Contemporary Neo-Kabbalah in Israel as a Form of Consumer Culture – Persico, Tomer

Body and Soul in Yemima Avital’s Teachings and in Her Students’ Testimonies, Philosophies and Practices – Ramon, Einat

Theosophy and Anthroposophy in Israel: An Historical Survey – Lubelsky, Isaac