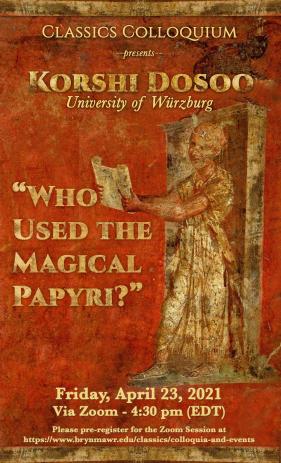 Coptic Magical Papyri team leader Korshi Dosoo will be presenting an online talk entitled “Who Used the Magical Papyri?” this Friday (23 April) at 4.30pm EDT (10.30pm CET) as part of the Bryn Mawr College Classics Colloquium.
For nearly two hundred years the Greek and Demotic magical papyri have provided a fascinating source of information on the rich syncretism of Roman Egypt. Filled with instructions and evidence for curses, and love, healing, and divinatory spells, the corpus seems to offer a glimpse into the private lives of its users and writers, and yet, because we know very little about where and how the papyri were found, scholars have often only been able to make educated guesses about who these people were – wandering magi, Egyptian priests, or scholars dependent upon rich patrons. This talk will offer some thoughts on this question, drawing primarily on the few cases where archaeological or archival evidence allows us clear glimpses of ancient people who owned, used, and produced magical papyri.
If you’re interested in taking part, you can register at the following link: https://brynmawr-edu.zoom.us/…/tJ0vcOCqqjooGtamY…
More information about the talk and the colloquium can be found here: https://www.brynmawr.edu/classics/colloquia-and-events