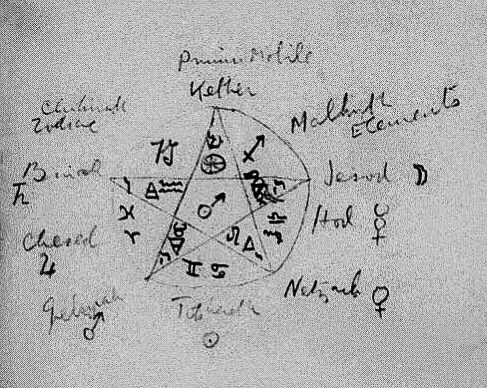 Crowley – A rough drawing of the Pentagram

“Establish thyself firmly in the equilibrium of forces, in the centre of the Cross of Elements, that Cross from whose centre the Creative World issued in the birth of the dawning Universe.” – Liber Librae

A friend recently asked me if I would shed some light on the source of a variant of the LBRP—that which some commonly refer to as the “Thelemic Banishing Ritual of the Pentagram”.

For those of you who do not know, Crowley taught a slight variant of the standard LBRP, as given on page 379 of Magick in Theory and Practice. Between steps one and two (when one intones Ateh and Malkuth) Crowley adds the additional name of Aiwass to be vibrated at the heart Chakkra.  This variant was practiced at the Abbey of Thelema in Cefalu and Jane Wolfe taught it to the members of Agape Lodge in California.  It is here that Phyllis Seckler first saw this ritual performed and she would be the first to write about it in modern times when she published it in her periodical In The Continuum in March of 1973. Reportedly, the Thelemic Ritual of the Pentagram was practiced as a group ritual at the Abbey of Thelema and Betty May recorded the following hilarious account in her memoir Tiger Woman, in which she reports:

“When all were assembled, the Mystic rose from his seat, and taking one of the swords from the side of the brazier, held it pointing towards the altar while he intoned an invocation in a language with which I was not familiar.  From hearing it every day, however, the sounds remain fixed in my memory.

Grady McMurtry, who was taught the LBR by Crowley himself, was also familiar with this variant as several living can attest.  For the record, I have been interviewing those living who knew Grady and the Pentagram ritual has become a common topic of these conversations. (My hope is to publish these notes at a later time).  Lon DuQuette has also acknowledged in writing that both Grady McMurtry and Israel Regardie told him that Crowley utilized Aiwass in the Qabalistic Cross.

There is also evidence that J.W. Parsons lectured on this variant at Agape Lodge, in his unpublished notes.  What many do not know is that Germer had sent out Crowley’s notes to this Revised Pentagram ritual at the behest of Crowley around 1944.  Years later, Germer went looking for these notes and noted that he had misplaced them and so began writing others in the hopes of relocating them.  Phyllis received a letter dated December 24th, 1960 in which Germer enquires about these notes:

“About 1944 A.C. sent me the text of his revised Ritual of the Pentagram (Magick p. 379).  I sent this out to, I think, everyone – I had some copies left in my files, but I cannot find a single copy… I feel sure you must have a copy, if not, you may find Jane’s copy that I sent her.”

Germer stressed that it was important that he recover these, and for this reason Phyllis immediately went through her files in the hopes of locating them but turned up empty-handed.  She wrote to Germer, on January 1st, 1961, “I looked through all Jane’s papers to find the Banishing Ritual you asked for. All that came up was the enclosed copy of A.C.’s notes on it.”  These are the now commonly known notes which include the instructions “You are supposed to be standing at the intersection of the paths of samekh and pe.” (As published in the large blue Weiser edition of “Magick Book 4 I-V” p. 690-692) First page of the notes sent to Grady – circa 1947

Luckily, Grady had a complete copy of Crowley’s notes which had been sent to him by Jane Wolfe.  Grady date-stamped these notes as received on January 15th, 1947 and a complete copy is extant in the Hymenaeus Aleph archive. (see attached image).

So why use this variant at all?  As Phyllis put it, “The reference to Aiwass links you with Thelema and places this God in the sphere of Tiphareth, which refers to the Sun.  Aiwass stands as a symbol of your own Holy Guardian Angel, Who has led you thus to Thelema, the Wisdom and Law of the New Age.”

Some have argued that if one was going to use a name for the Holy Guardian Angel in this or any ritual, then it ought to be the name of their own Angel, should they be in possession of such.  This is a sound and maybe even wise position to take, and for this reason many will silently acknowledge their Angel at Anahata when performing this ritual publicly.  Yet, another viable option may be to substitute Adonai at this stage of the Qabalistic Cross.

Interestingly, in Liber V Vel Reguli, Crowley would similarly utilize Ra-hoor-Khuit at Anahata and shift AIWAZ into Ajna and Visuddhi during the first gesture which also formulates the Qabalistic Tree.  In this instance the solar deity has become Ra-hoor-Khuit, a Thelemic archetype of the God-Man and thereby an aspect of the Holy Guardian Angel.  Note that the dual-fold nature of this Thelemic deity is described in the the third chapter of Liber AL as Heru-ra-ha (extroverted) and Hoor-pa-kraat (introverted).  This fundamental shift may suggest that in Reguli the Aspirant is raised into Solar-consciousness while the “Angel” is shifted above into its introverted from.

In any regard, Crowley continued to use the LBR throughout his life and I for one have always enjoyed the alternative addition of the Angel.  In my opinion it adds weight to the standard LBR especially when considering that the Angel is not just the higher self.  From this perspective, this single alteration does indeed introduce a Thelemic element.

Like Crowley, I too prefer the LBR for straight forward banishing and find great value in it.  Over the years I have tried Aiwass, Adonai and the name of my own Angel at the point in Tiphareth, and in most all cases I still prefer Aiwass.  However, this may simply be because this is how it was first taught to me.