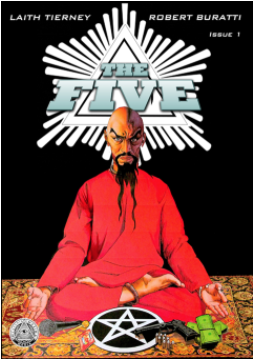 Mysteria Maxima Media has announced the publication of the first volume of “The Five”  which features artwork by Robert Buratti, a member of Collective777, the Art Guild of OTO Australia. Their site says:

“Our heroes embark on five very specific missions framed as an inspirational journey of self improvement and self empowerment with a hotshot of humour and a lethal dose of sad truth, we target our culture and pull the trigger.

“THE FIVE takes place over six issues and is to be self published as a graphic novel in 2016 and was written by Laith Tierney.

“The brainchild of local creatives, Laith Tierney and Robert Buratti, Mysteria Maxima Media is an independent Perth-based publishing house devoted to pop culture and graphic arts. The company was set up to foster the growing local talent of illustrators, comic and graphic novel creators in West Australia with a view to showcasing original and fresh creations to a national audience. This month the pair launch the company’s first release, a new graphic novel entitled, The Five at the Supanova Pop Culture Expo, written by Tierney and illustrated by Buratti.

“As a long-time collector of comic culture and a regular fixture in the local music scene, Laith Tierney creates characters which step outside the usual boundaries of the genre, and his well crafted scripts have already caught the attention of readers. His move into publishing adds a further reach to his existing projects across radio, music, marketing and events.

“Over the past year, Robert Buratti’s art has been shown on the largest video screen in Times Square New York, was featured in a number of major national and local art prizes, and his large scale cinematic short films recently served as the backdrop to the international tour of iconic rock trio, The Tea Party.

“Pre-release purchases for The Five have already exhausted the initial allocation and there’s no sign of slowing down just yet. The pair will appear in Adelaide (20 – 22nd Nov) and again in Brisbane (27 – 29 Nov) to give talks, and speak with visitors about the first release and the future directions of the new venture. “