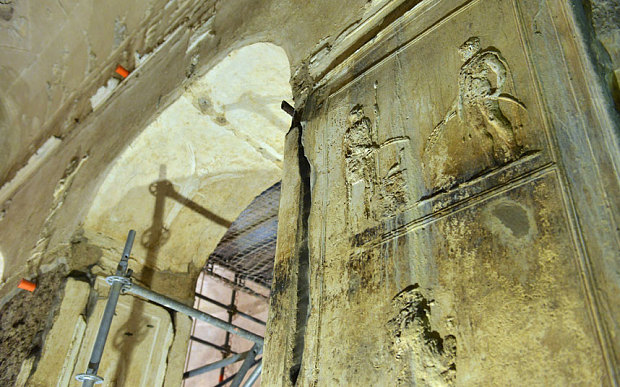 The London Telegraph reports that a basilica built in the 1st century BCE in Rome will be opened to the public for the first time since its discovery in 1917. The basilica was commissioned by an important family for were devotees of one of the many Mystery Cults that thrived during the Helenistic period. In part the article says:

“The basilica, the only one of its kind in the world, was excavated from solid tufa volcanic rock on the outskirts of the imperial capital in the first century AD.

“Lavishly decorated with stucco reliefs of gods, goddesses, panthers, winged cherubs and pygmies, it was discovered by accident in 1917 during the construction of a railway line from Rome to Cassino, a town to the south. An underground passageway caved in, revealing the entrance to the hidden chamber.

“The subterranean basilica, which predates Christianity, was built by a rich Roman family who were devotees of a little-known cult called Neo-pythagoreanism.

“Originating in the first century BC, it was a school of mystical Hellenistic philosophy that preached asceticism and was based on the writings of Pythagoras and Plato.”