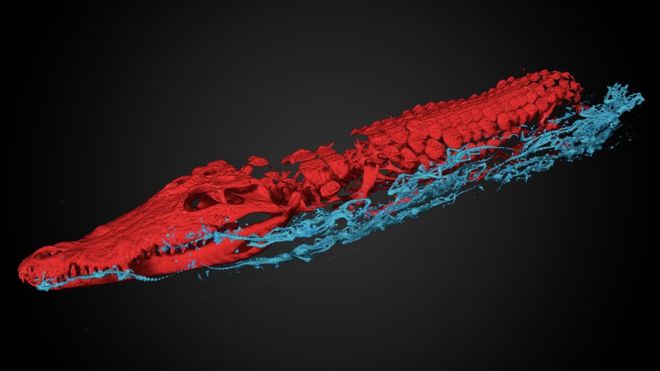 A scan in the 1990s showed that a nearly ten-foot-long crocodile mummy housed at the National Museum of Antiquities in Leiden since 1828 contains the remains of two juvenile crocodiles, who were preserved nose-to-tail in the wrappings.  BBC News reports that a new 3-D CT scan, conducted by the Swedish company Interspectral, has revealed 47 mummified crocodile hatchlings tucked into the mummy’s exterior bindings.  “You can’t see them very well on the old scans unless you know they’re there—and we never expected to find this,” said museum curator Lara Weiss. She explained that the mummy could reflect the Egyptian belief in life after death, and was probably an offering to the crocodile god Sobek.  A similar crocodile mummy of a large adult with 20 young on its back is housed at the British Museum.

For more information at http://www.bbc.com/news/blogs-news-from-elsewhere-38026363