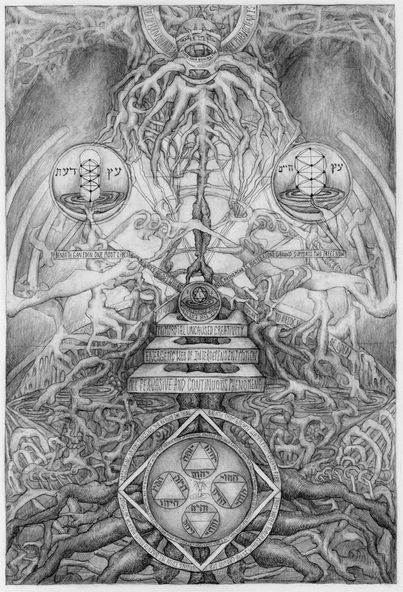 A small taste of the Kabbalistic vision of the klipah-foam (malkut) from the forthcoming sixth volume of LFA:
When mind is locked within a klipah (qlipah), its limitation is all that it can know and there is no perspective beyond it. However, each klipah bubble overlaps with infinite other bubbles that constitute the realm. Whatever one stream of psyche does to form its bubble may seem unique on the individual level, but it is generally almost identical in scope and texture to what infinite similar bubbles and streams are doing and have done forever. Because of the shared general base of habits, the personal bubble field only reiterates variations of the collective habit field. General and specific bubbles overlap and mix into an almost indistinguishable massing. This massing can be actually seen in contemplation.
The body-mind is acclimated within a network made of bubbles. The foam that carries the framework is a mixing field of every possible variable, and this means that there are always concealed sparks of clear light available at every juncture … even in the densest bubble-filled masses. As the fire of longing rises to melt the frozen skins, the heat and pressure dissolves the outer aspect of the bubble. Each time the fire reaches towards a bubble, it forms a new thread. Liberated life force that was frozen into the outer skin then joins with the rising fire along the thread. As the heat and pressure increases, it suffuses the inner layer of the skin and becomes subcutaneous. As it reaches directly into the klipah’s interior, the trapped mercury reawakens its original fluidity and becomes bright.
As the frozen mercury is reawakened, it becomes bright and fluid. It then expands and drips along the thread that has been pulled. This unmakes the skin. Each brightening effects the entire network overall, and the foam passes from heavy opacity into light transparency. This transmutation progresses according to the degree of profundity … it can be slow like shifting tar sands, or instantaneous like a lightning flash.
Ultimately, the thread can break apart into scintillation. The scintillation field is suffused with liberated life force and free mercury, and it is within this scintillating ocean that resistance is exhausted. Unbearable wonder and awe arise through the swirling explosion of profuse scintillation. The intensity of this conflagration utterly outshines and exhausts the associative complexes and emotive resources of the psyche. This is where the ecstatic upsurge begins to outshine the mind’s capacity to react to its own stimuli, and true bliss sparkles through the haze of dissolution. Everything and everyone dissolves here, and what remains is beyond what can be categorized.
Scintillation introduces clear light in shards and sparks. Luminosity is realized as the nature of all appearance co-equal with awareness. The realization of luminous awareness is often mistaken for “enlightenment”, but there is further to go on the path. Awareness falls through its own brilliance to the nothingness of the ground. Language completely fails at this point. What is realized in nothingness? Nothing! This is the plenum of En Sof … the openness of pure possibility that is completely full. Awareness falls through itself and leaves nothing, and this is the face of gnosis. But even nothingness is not the end of the path. The open fullness of nothingness spontaneously manifests every possibility. What follows is infinite variation reborn.
— from the forthcoming LFA Volume 6 (wont it be nice)
For more info: https://www.davidchaimsmith.com/.