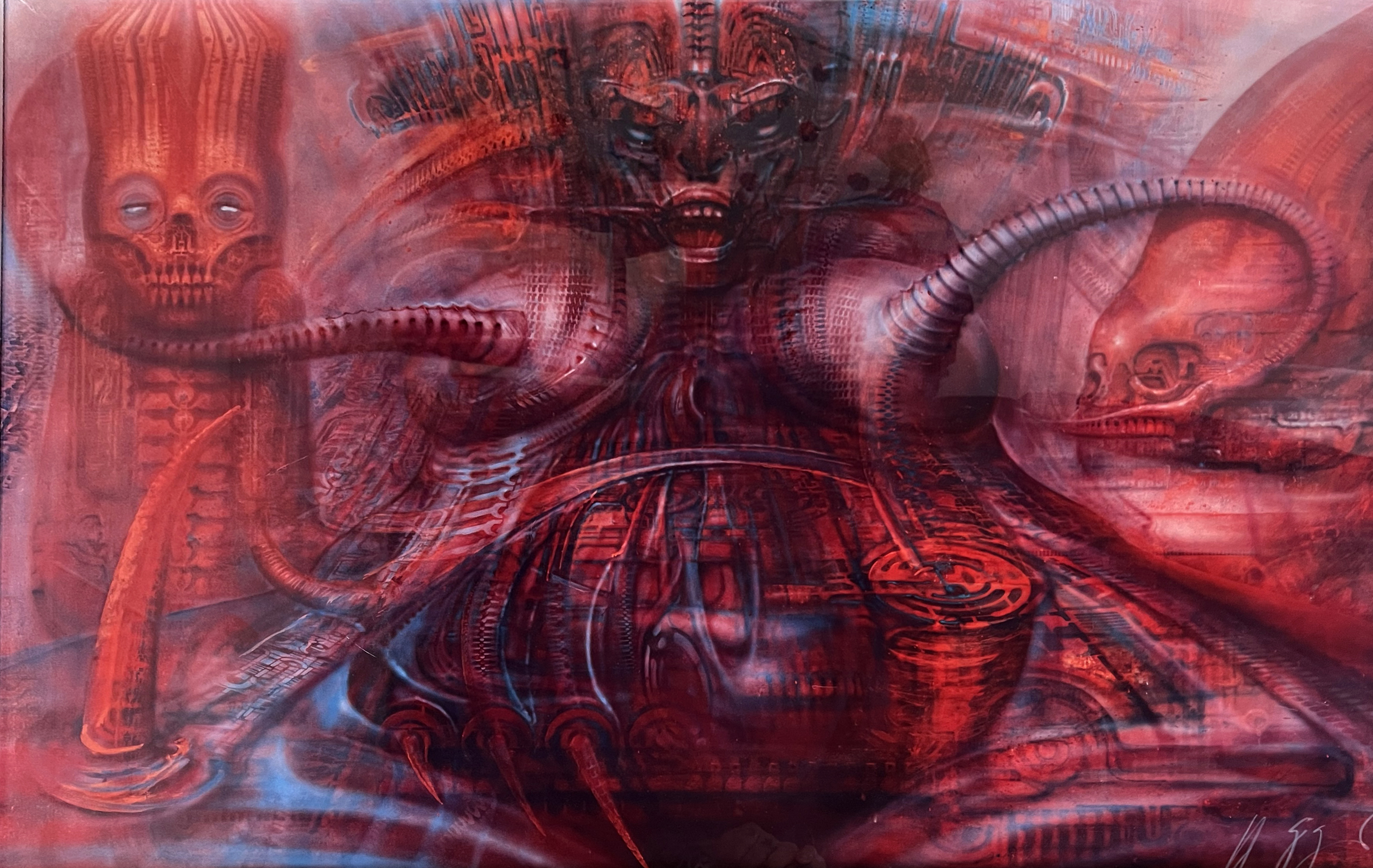 The Art of H.R. Giger and Vincent Castiglia 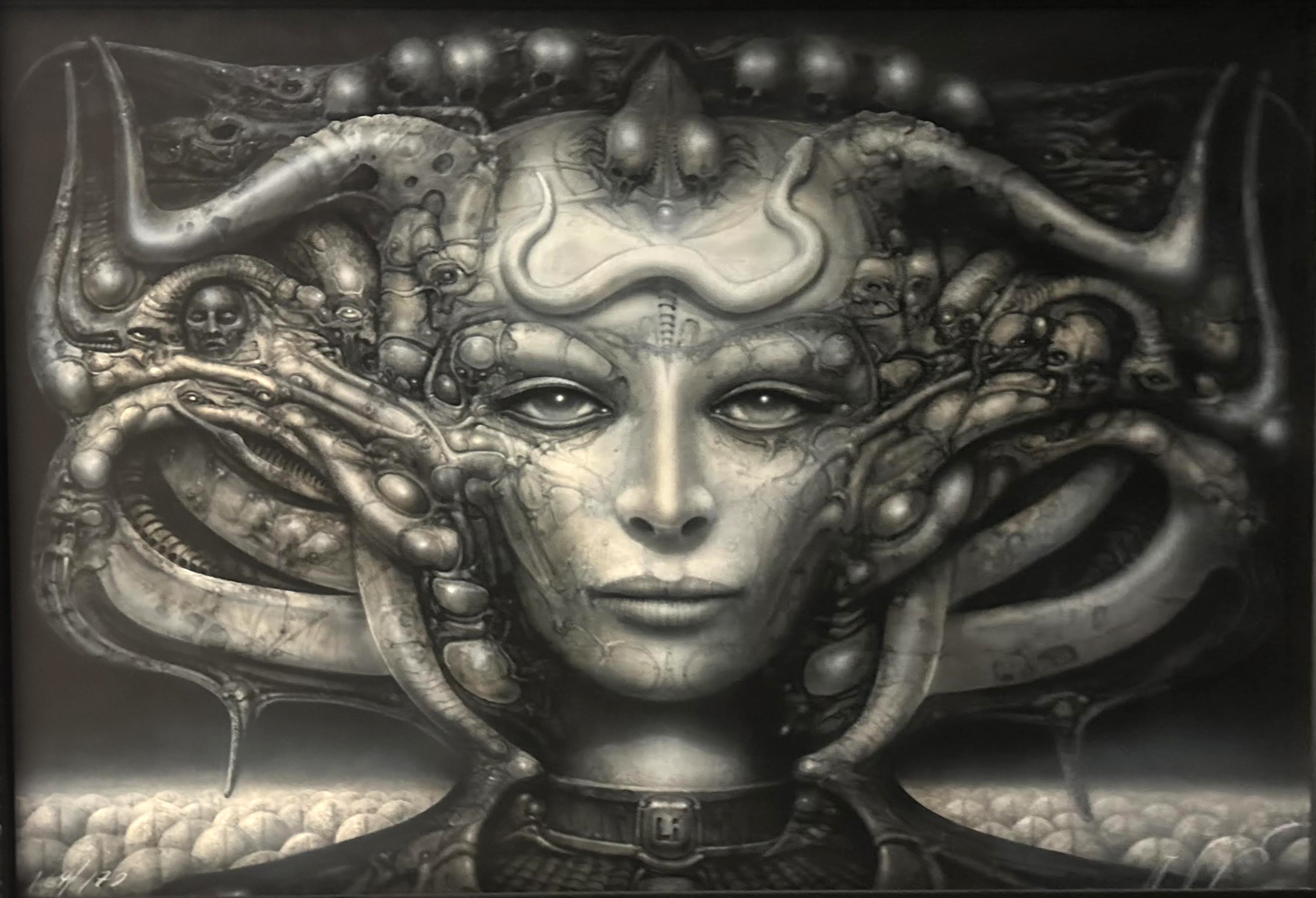 The exhibition opens December 1st and continues through February, 2022. The exhibition coincides with this year’s Art Basel Miami, one of the largest art fairs in the world.

A catalog will be available, with contributions from esteemed writers Michael Bonesteel (author of “Henry Darger: Art and Selected Writings) and curator Robert Cozzolino (whose exhibition “Supernatural America: The Paranormal in American Art” recently toured museums in the USA), as well as Christopher Ian Lutz (whose writings have appeared in Beautiful Bizarre and Riot Material, and who wrote the catalog essay for Morbid Anatomy’s “Opus Hypnagogia” exhibition).

In his essay for the catalog, highly regard art critic Michael Bonesteel says:

“If Castiglia ever came close to having a mentor, it would be H.R. Giger (1940-2014), the Swiss visionary artist renowned for his designs in Ridley Scott’s 1979 sci-fi horror film Alien. Aptly, Castiglia was the first American artist to receive a solo exhibition at the H.R. Giger Museum Gallery in 2008.” 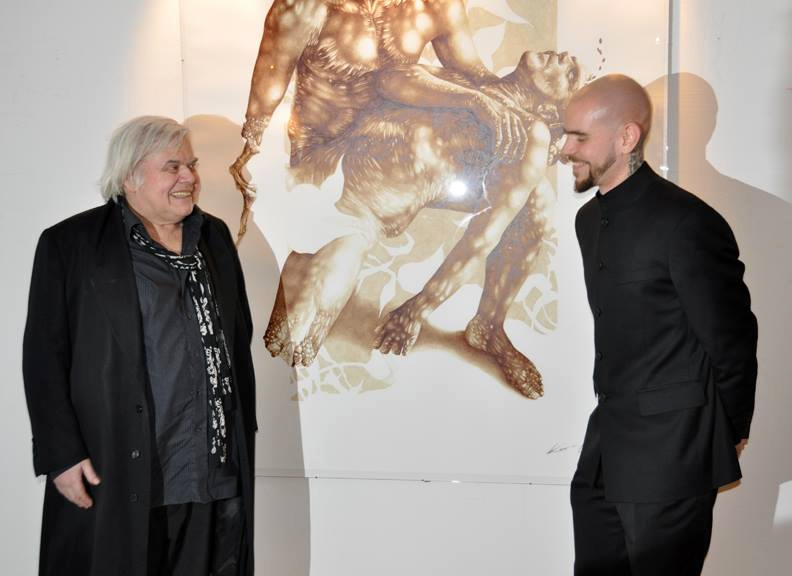 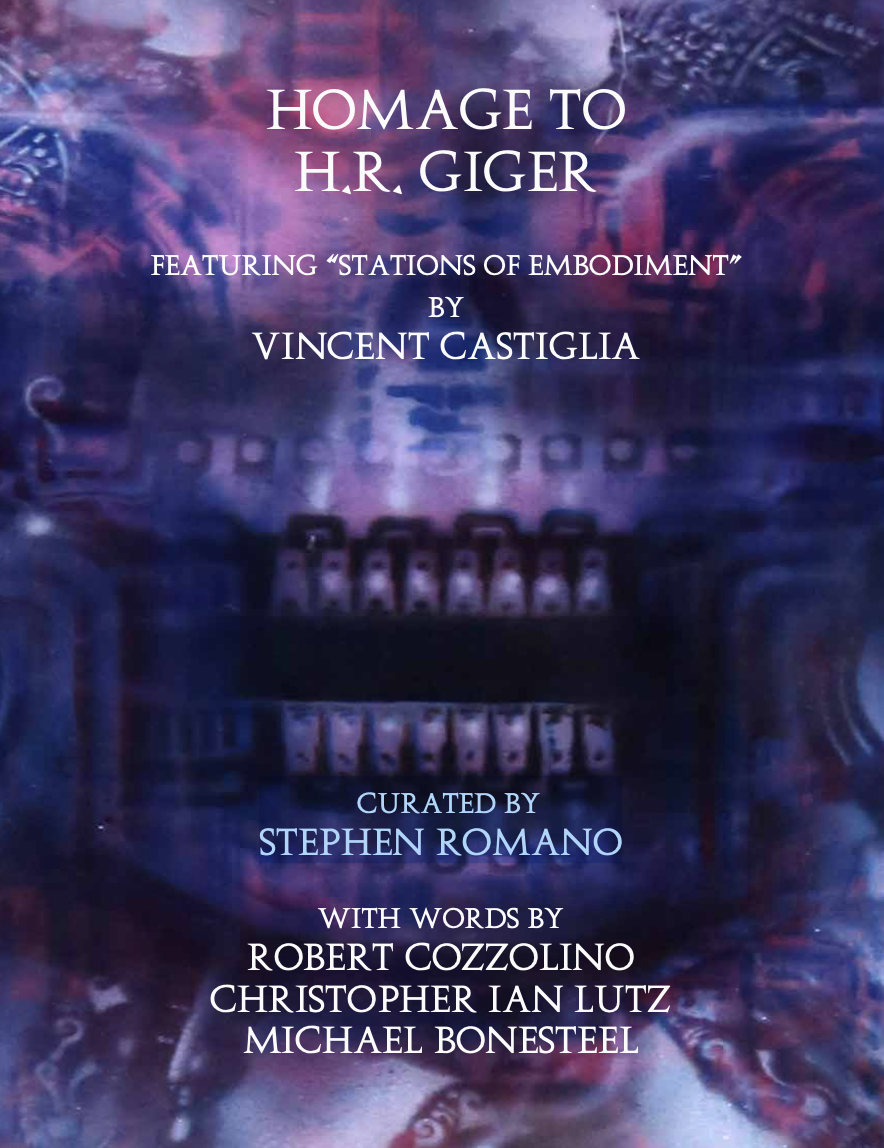 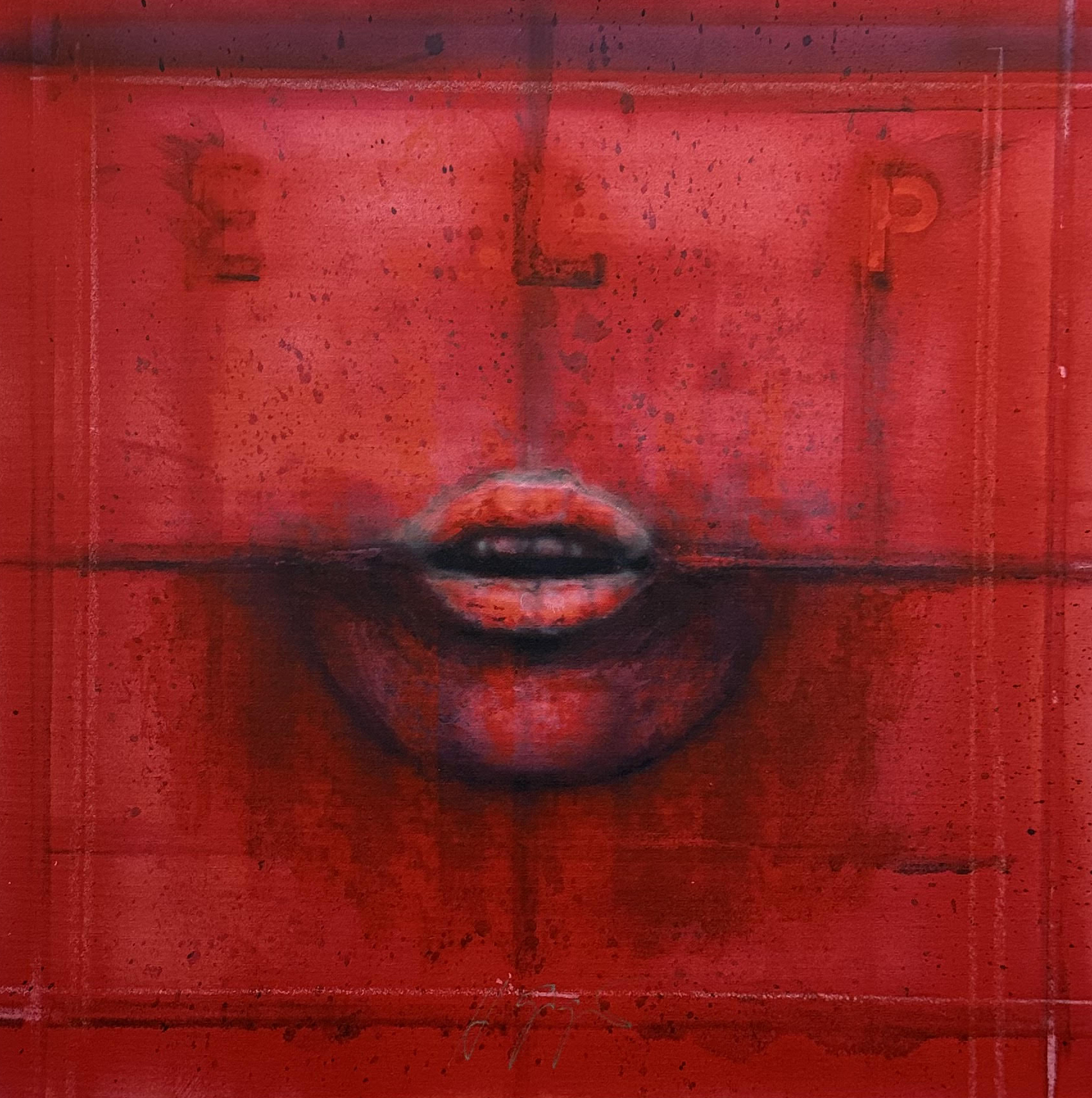 This exhibition is Vincent Castiglia’s tribute to one of the greatest artists of our time – H.R. Giger, with whom he had a very close artistic relationship.

The exhibition is endorsed by the H.R. Giger estate. 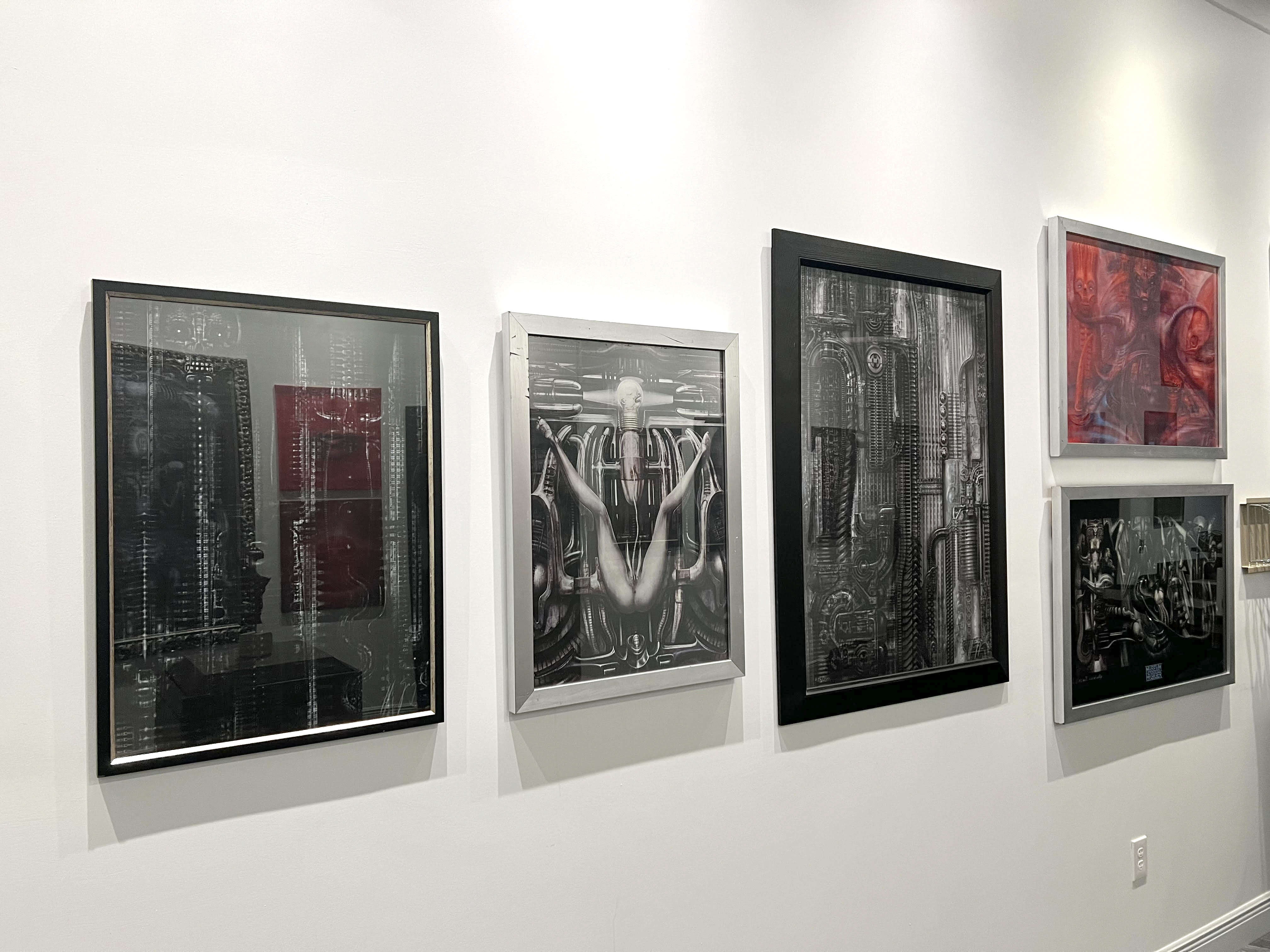 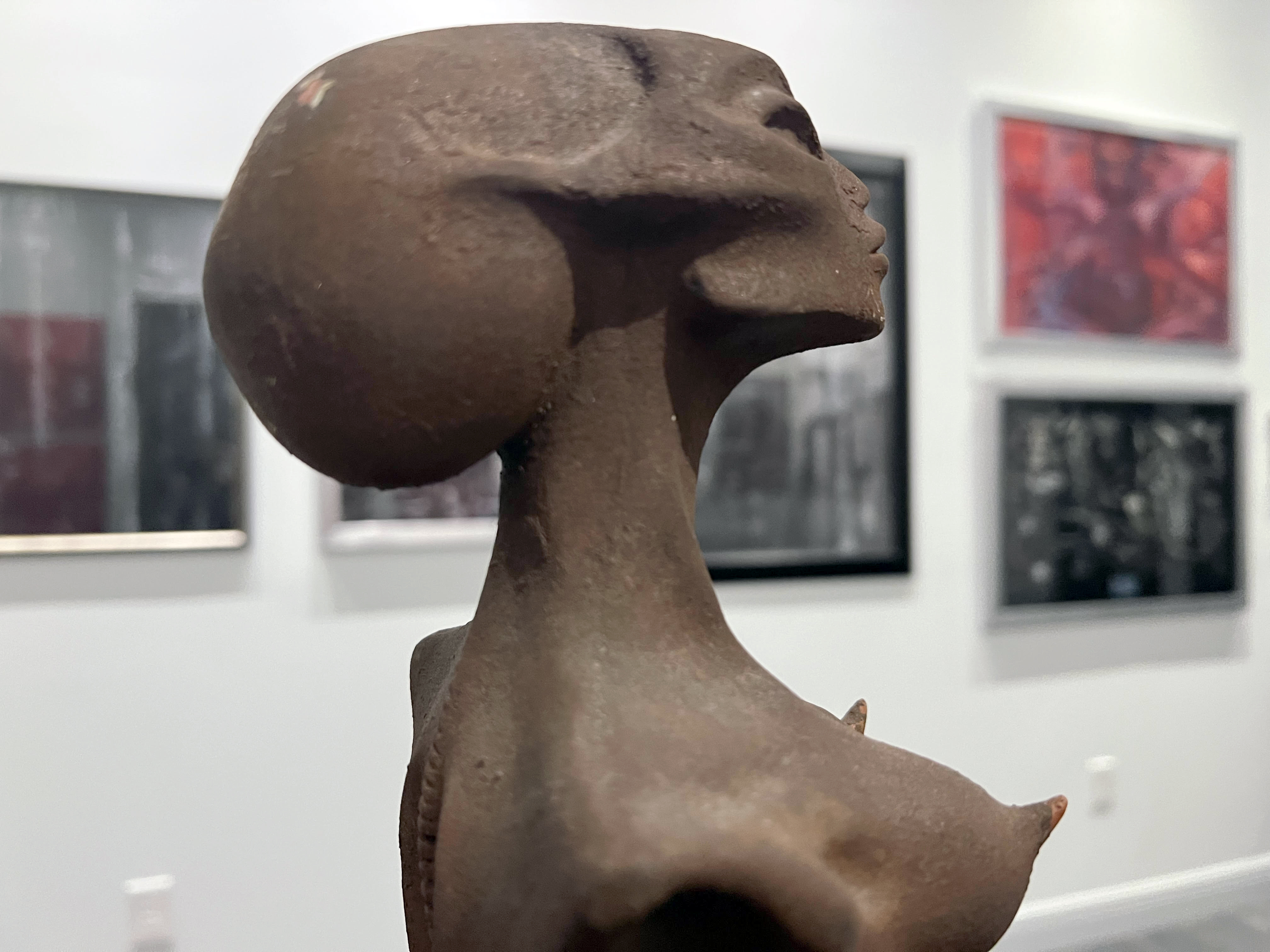 Robert Cozzolino, Patrick and Aimee Butler, Curator of Paintings at the Minneapolis Institute of Art writes in the exhibition catalog:

“Early sensations and images, aligned experiences, and coincidental encounters shape us and affect what we wish to understand. They inspire what catches our eye, sparks our imagination, beckons us to confront, question and speak to, and learn from. question and speak to, and learn from. These are critical questions of biography that art historians, critics, and curators should regularly discuss. It drives us to seek certain images and ideas, forming the taste, biases, pleasure, and repulsion that lead us to write about, collect, display, and value certain art. Understanding where these impulses come from and what they mean is undervalued and not openly discussed in the art world…

I did not know it then, but I had Hans Ruedi Giger (1940–2014) to thank for the overwhelming feelings that Alien produced and also the way it seemed to relate to the disparate causes of disruption and uncertainty in my daily life. Films are collaborative, an ensemble affair, and all of the elements coalesce perfectly to my eye in Alien…”

“The artworks of this exhibition reject realism through their fantastic depictions of form and narrative. Yet, they are hyperreal in that they portray familiar experiences and ideas. But these representations are without a referent. These works are anatomical studies of forms and memories that do not exist. The figures and narratives are familiar because they reference emotional and cognitive experiences within the audience. The artists are not pursuing the rendition of form or factual history but the meaning of form. It is not the bone that is intriguing, but the ideas of balance, movement, harmony, and function that are inherent in the skeletal and circulatory systems. These same ideas are fundamental to the creative process between an artist and their creation. These same ideas are fundamental to communication between individuals and nature. These artworks do not reject realism — they are real.’

The art of H.R. Giger (born Hans Ruedi Giger in Switzerland in 1940) has been emblematic of the zeitgeist of our time since the spring of 1979 when Ridley Scott’s film, –a masterpiece of science fiction horror– Alien was unleashed upon an unsuspecting world. However, Giger’s art was already well known through posters and the underground magazine networks of the late 1960s. Since that time, Giger’s art has proliferated onto museum walls, album covers, films, and much more. 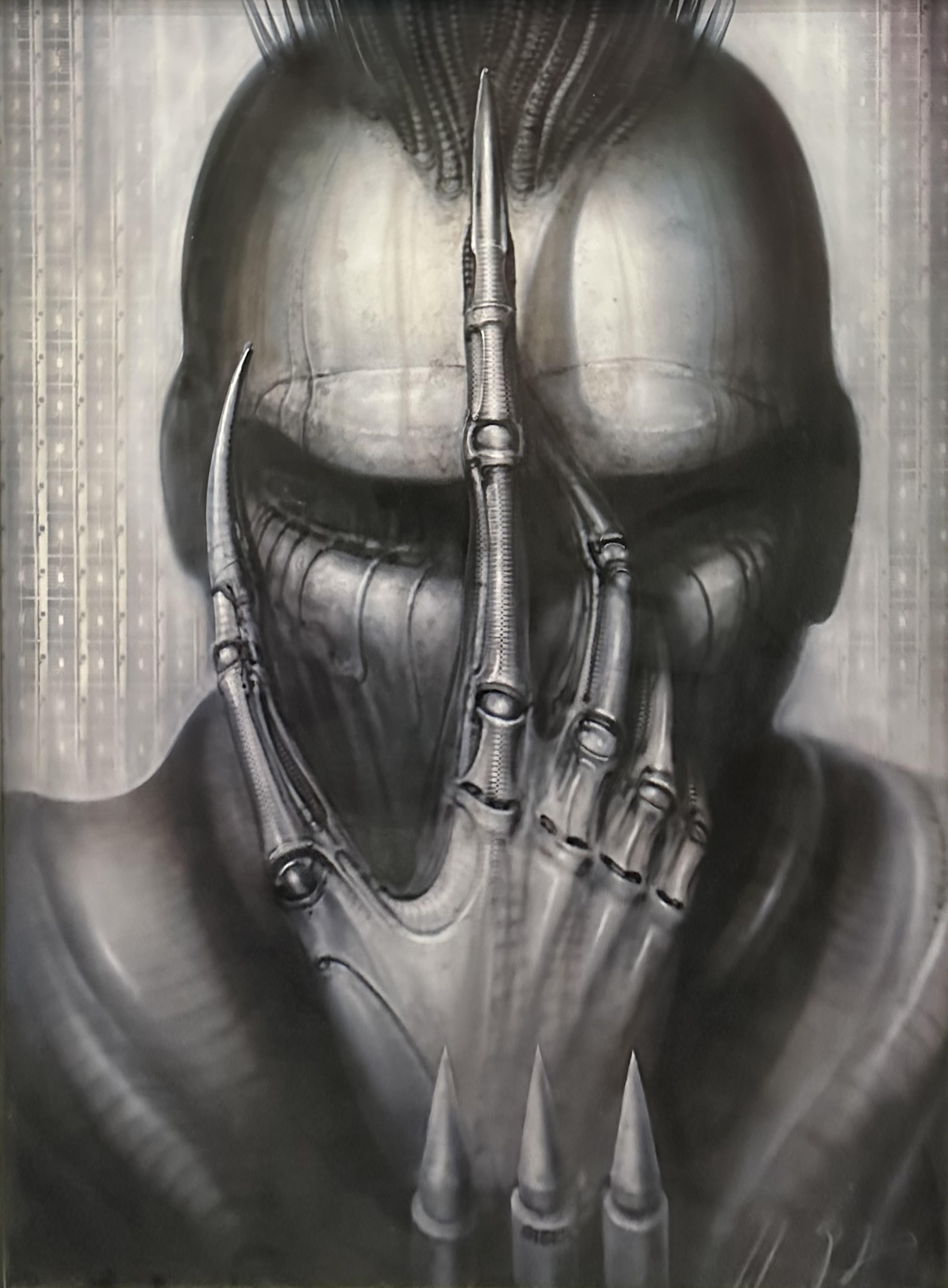 Through its proliferation into mainstream culture, Giger’s art has led to instant unmistakable recognition for its stylistic and otherworldly aesthetic qualities, most often exploring the darkest depths of the human psyche.

Giger’s art was inspired by the post-WW1 surrealist movement, which preceded him by a few decades, as well as contemporaneous artists such as Ernst Fuchs, Salvador Dali, Stanislaw Szukalski, and Austin Osman Spare. The surrealists explored, in their manifesto, the proliferation of the unconscious mind through art. Giger, however, went even further, as he explored the dark future of humanity and coined the term “biomechanical”, and through his art, prophesied the inevitable cold symbiosis of man and machine, and the dreams of the future. Giger painted mainly with an airbrush, a very eerie and dreamy medium.

“What scares me most is overpopulation, with all its horrifying side effects such as epidemics, mass hysteria, famine, and total environmental destruction. For me, the greatest criminals against mankind are those who, with the help of religion or false ethics, forbid the pill, prevent abortions, and hinder old people from dying a redeeming death.”

He also said, “If people want to interpret my work as warnings about too much overpopulation, disease, and mechanization in the future, then that is up to them”.

H.R. Giger passed away in May 2014, at the age of 74. To claim that Giger is one of the most beloved and influential artists of our time is in no way overstating his legacy. He is one of the very few artists in modern times to be bestowed the title of “the master”. 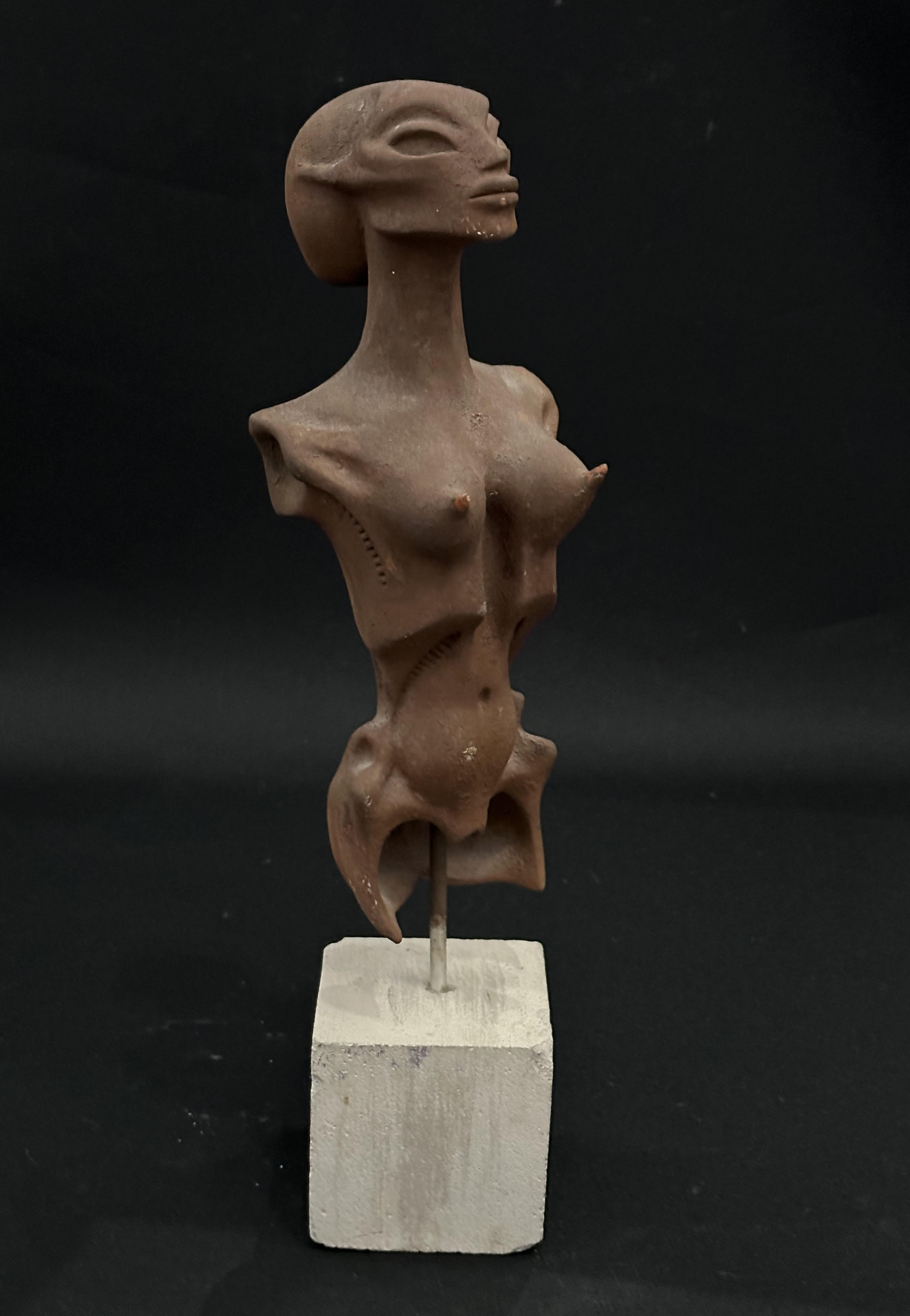 Concurrent to “HOMAGE TO H.R. GIGER” will be “Stations of Embodiment” an exhibition of painting by Vincent Castiglia. 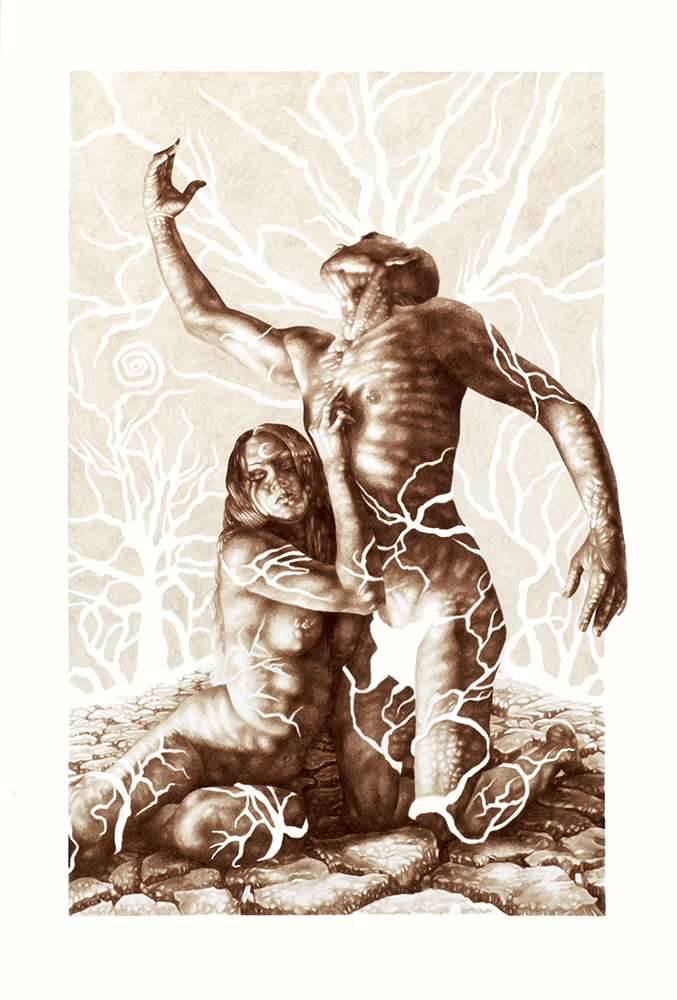 The exhibition’s organizer, Vincent Castiglia, in whose eponymous gallery it is mounted, is renowned internationally for his meticulously visceral paintings drawn in human blood. The artist’s first exhibition was at the H.R. Giger Museum in Switzerland, titled “Remedy for the Living” which opened on November 1st, 2008, and ran for six months. Vincent was the first American artist to receive a solo exhibition invitation from the H.R. Giger Museum. 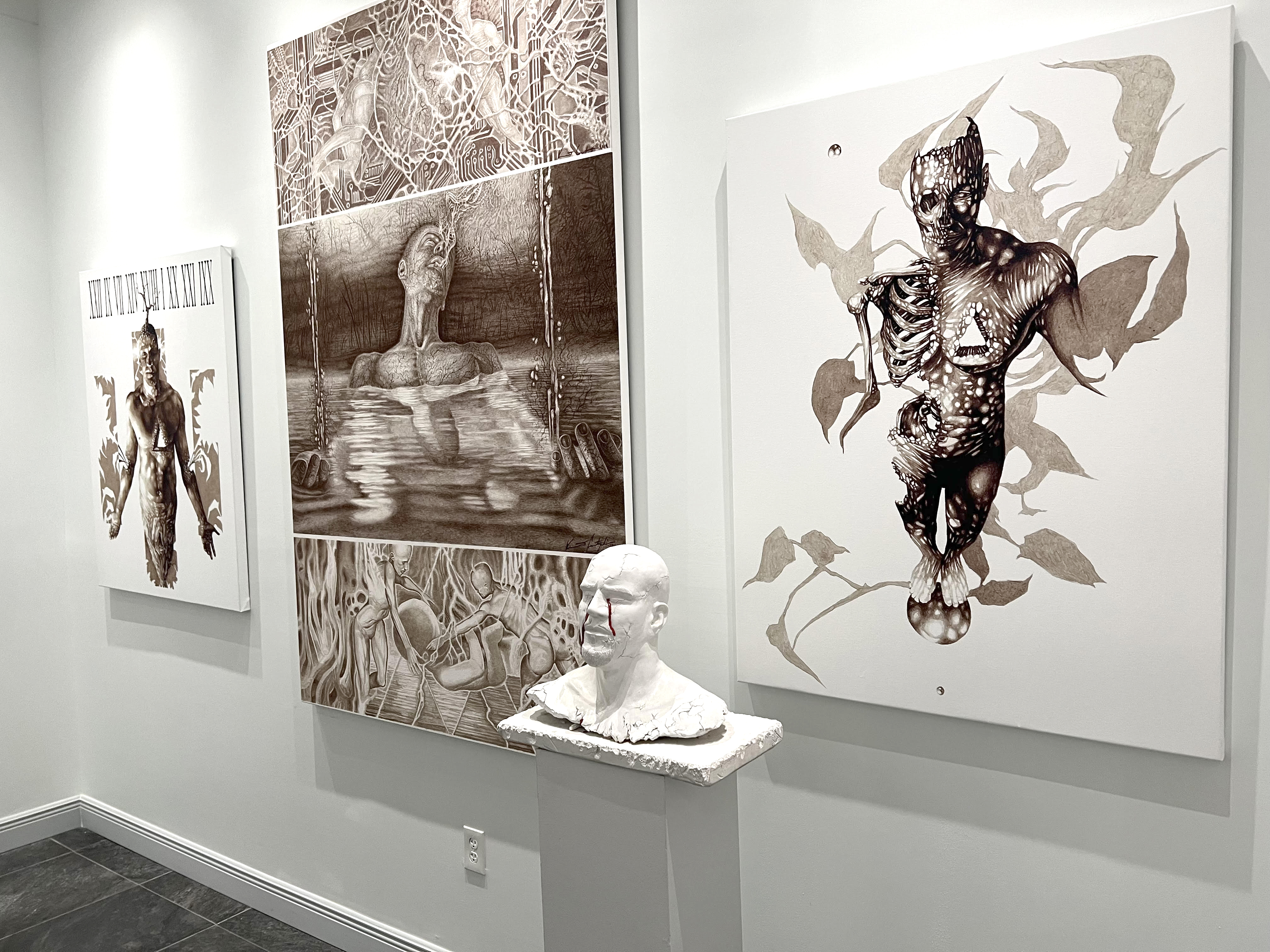 installation view of “Stations of Embodiment” by Vincent Castigliani 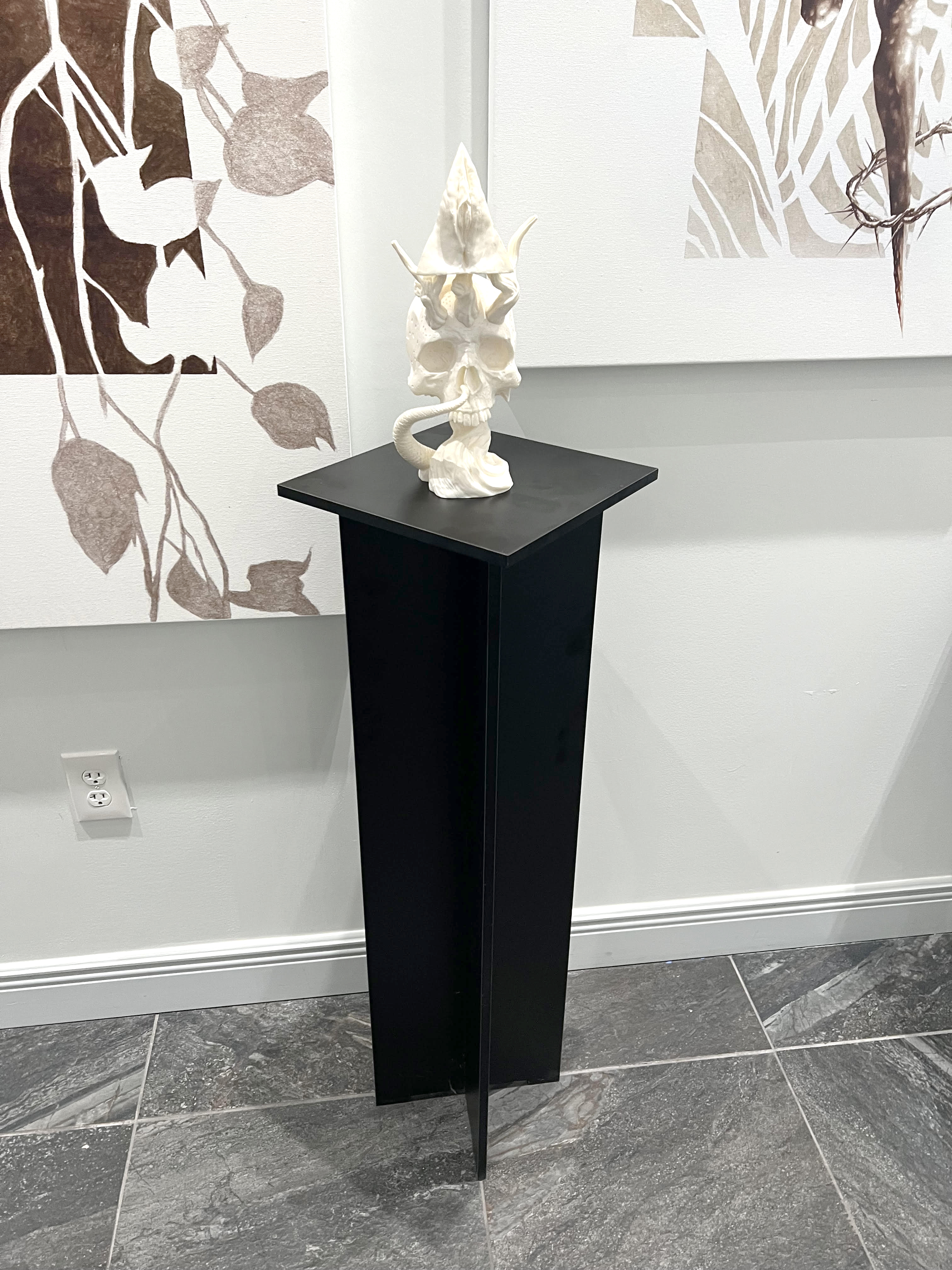 installation view of “Stations of Embodiment” by Vincent Castigliani

Vincent says: “The opening day of “Remedy for The Living” with HR at the Museum Gallery, I cite that as the best day and experience of my life. Giger was like a god to me growing up, an artistic inspiration of the highest order. It was a dream come true. In addition to being one of the greatest artists of our time, he was like a prophet. Giger was just an unparalleled talent; his work was just so far beyond anything I’ve ever seen. He mediated into this world a body of work singular in vision and execution, the depths of which we’re only beginning to scratch the surface of, that will no doubt reverberate through infinity.”

Vincent Castiglia was born in Brooklyn, New York in 1982, and presently resides in Fort Lauderdale, Florida, where he owns and operates his gallery.

Exhibition curator Stephen Romano continues: “While Vincent Castiglia’s art makes stylistic references to surrealism, it is not born out of dreams or fantasy, but rather the artist’s own trauma and ordeal. In that regard, an understanding is required that the story of Vincent’s life is inextricably intertwined with his art, much like outsider artists Henry Darger and Adolph Wolfli. This gives the art itself a level of authenticity. Yet, Vincent’s art, much like H.R. Giger’s, is shamanic, in that it attempts to not only purge the artist of his trauma, but acts as a cathartic experience for the viewer, as they may bring their own subjective experience to the interpretation of the works, and thereby experience a similar healing experience. This, to me, is the noblest aspiration an artist can have.”. 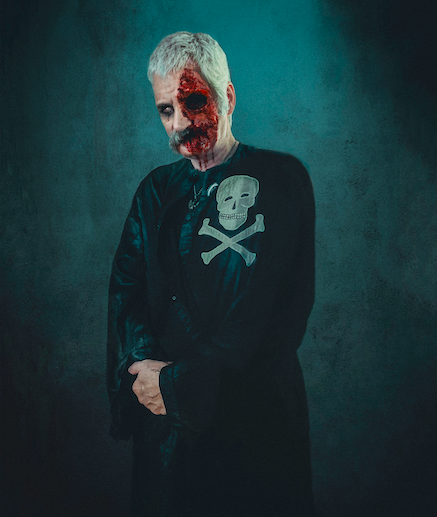 “As a curator, I’ve had the opportunity to present Vincent Castiglia’s art in several different settings. What is astonishing and truly notable is that people from all walks of life respond to it emphatically.

It is a testament to Vincent’s artistic practice that it brings so much awe and elation to a world deeply in need of healing. This is the artist as an altruist, with unselfish regard for and devotion to the welfare of others, that both Vincent and H.R. Giger perpetuate in their art.”

The exhibition opens Dec. 1st and continues through Feb. 2022.