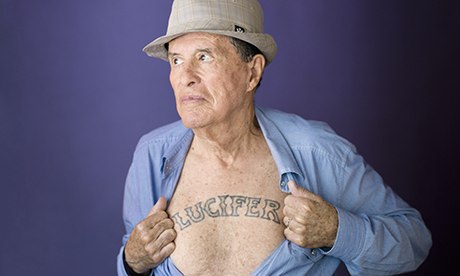 Kenneth Kenneth Wilbur Anglemyer aka Kenneth Anger was born February 3, 1927. He is a seminal avant-garde filmmaker, known for filling his work with homoerotic and occult themes. It’s reputed that his first public screening was orchestrated by Harry Smith who was curating a film series in San Francisco at the time. He was been an outspoken advocate of the works of Aleister Crowley and allegedly involved in a number of occult groups of varying levels of savoriness. He had the ear of British rock stars in the 60’s and use of Jimmy Page’s London digs at one point. One can see his influence on the Rolling Stones with songs like “Sympathy For the Devil,” and Mick Jagger’s stage gear and moves around the time of the Stones’ “Rock And Roll Circus” TV special and their U.S. touring to promote the “Let It Bleed” album that ended at Altamont. He’s reported to have been on hand for the Exorcism of the Pentagon demonstration and ritual and performed the Mass of the Phoenix beneath the flat bed trucks that the Fugs were atop of presiding over a sex magick ritual. Yeah, there’s lots of stories. Lots… You’re likely aware of most of them.

I for one and glad the old geezer is still with us.

Here’s his website which is mainly for selling merch: https://www.kennethanger.org.

Here’s one interview with him: https://www.esquire.com/uk/culture/news/a5483/kenneth-anger/.