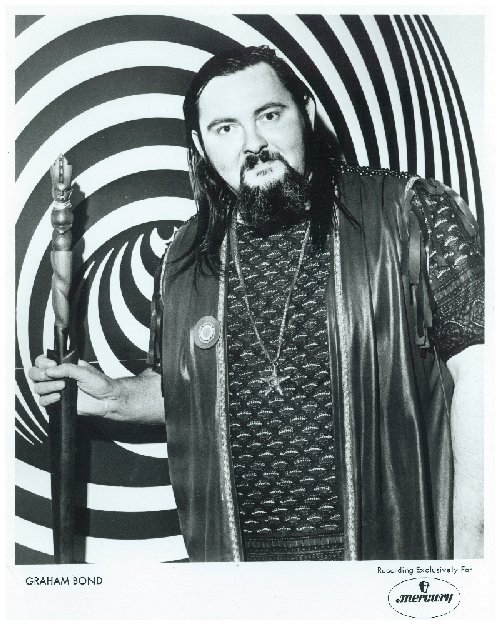 Graham John Clifton Bond was an English musician and occultist. He was a major player in the early rhythm and blues explosion of Britain in the 1960s. He first began gigging in 1960 and gained some attention performing alto saxophone as a member of the Don Rendell Quintet in 1961. In 1962 he met and began playing with both Jack Bruce and Ginger Baker, of Cream fame. In 1963 the three were joined by guitarist John Mclaughlin, of Mahavishnu Orchestra fame, to form the earliest version of his band The Graham Bond Organization, GBO.  Mclaughlin was soon replaced by Dick Heckstall-Smith on saxaphones. The GBO recorded two albums in 1965, The Sound of 65 and There’s A Bond Between Us.

In 1965 Bond and Baker picked up a heroin habit. Tensions were constantly high between Baker and Bruce which became unworkable. Bruce was fired in late 65’ and Baker followed in the summer of 66’. By this time Bond began getting more into tarot cards and the occult. He began wearing multicolored capes and dropping acid. He also continued his heroin use. By 1967 GBO had completely split up. Now Bond was convinced that he was a lost child of the English occultist Aleister Crowley. He claimed to have read about one of Crowley’s scarlet women giving birth in 1937, the same year as Bond’s birth, and then leaving the baby in an orphanage.  Since Bond was born in 1937 and adopted at six months old from an orphanage the symmetry made sense.

According to Pete Brown, lyricist for Cream, Bond used his work with Crowley’s system of Thelema to get off the smack. In early 1968 a clean and newly dedicated Bond set off to America. Eventually he landed in a studio in Los Angeles where he recorded both albums, Love is the Law and Mighty Graham Bond. Notable session musicians included Screamin’ Jay Hawkins and Dr. John. Both of these albums leave no question that Bond was still in the groove. Furthermore this is the first time we really start to see his occult and Thelemic influences showing up in his music. The title and the title track of Love is the Law, contain direct quotes from the Thelemic holy book, The Book of the Law. Love is the law, is a core statement of the Law within Thelema. We also hear Bond sing out, “every man and every woman is a star” in this song. On the album, Mighty Grahame Bond the track Freaky Beak offers a version of the Egyptian mantra,

This is from the Stele of Revealing, a holy symbol within Thelema. Bond offers this mantra as a form of protection against enemies within the song.  The occult and Thelemic  influence was now becoming explicit and undeniable within Bond’s musical expression

Bond returned to England in late 1969. Early in 1970 Bond married singer and occultist Diane Stewart. Together they formed the Graham Bond Initiation. That same year they put out the album Holy Magick. Holy Magick was almost entirely dedicated to expressing their occult views. The album begins with a lesser banishing ritual of the pentagram where he includes chants of Lashtal and Thelema. The song, 12 Gates of the City, literally uses the chant of IAO SABAO, for its chorus.  There are entire songs dedicated to Enochian calls, chanting Abrahadabra, and another A ka dua chant.  The rocking organ and wailing horns make this a really high energy Thelemicly charged album. The mix of blues and acid rock create a unique style of black-mass jazz. Anytime I listen to it I feel like I am transported to some sort of Thelemic tent revival, grooving to the child of the prophet and his cycles of the Sun.

The next year, 1971, Bond and Stewart put out another album called, We Put Our Magick On You. Again we can quickly see the overt Thelemic and occult influence. Stewart sings the song, Hail Ra-Harikite, praising the hawk headed Lord of the new aeon, a form of Horus, as the new name for Jesus. Bond sings parts from pentagram rituals and so forth throughout the entire album. The ripping organ intro on Forbidden Fruit followed by a driving sax solo leaves no doubt that Bond’s chops were up and that his playing was better than ever.

Later in 71’ he joined Ginger Baker’s Airforce alongside Steve Winwood, Denny Laine, Ric Grech, Chris Wood, Ginger Baker, and Diane Stewart.  This super group of sorts proved too unwieldy to sustain for long. Bond spent part of this year playing and touring in Jack Bruce’s band but wasn’t happy with it.

Bonds final studio effort came in 1972 when he teamed up with Cream lyricist Pete Brown. Together they recorded the album, Two Heads Are Better Than One. During this time Bond became addicted Dr Collis Browne’s cough syrup mixture. By 1973 the entire band was broken up and Bond was basically couch surfing with friends. At a complete low point he took jobs as an organ demonstrator for retailers. On May 8th 1974, Graham Bond stepped under an underground tube train in Finsbury Park station. There was no evidence of foul play, nor was there any suicide note. Some have speculated that he might have been chased into the station by drug dealers he owed money to. With no witnesses the coroner declared it to have been most likely a self inflicted death.

Graham Bond will always be a bright shining light in the world of Thelemic music. He lived his life honest and out loud. He expressed his Thelemic values openly through his music showing us all how funky and groovy Thelema could be. He did this during a time where there was a distinct shortage in Thelemic expression in the world. I hope we can honor his bravery and courage today by enjoying his music with friends and Brethren. We Put Our Magick On You: https://www.youtube.com/watch?v=17ZBLdoNJuI&t=301s