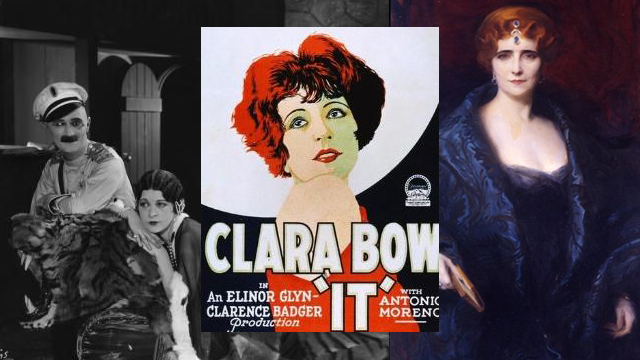 Would you like to sin
With Elinor Glyn
On a tiger skin?
Or would you prefer
To err with her
On some other fur?

Born Elinor Sutherland 153 years ago today, Elinor Glyn is probably best known for her romantic fiction in novels and Hollywood screenplays. She helped launch the careers of Rudolph Valentino, Gloria Swanson, and particularly Clara Bow. Interestingly, Glyn’s elder sister grew up to be Lucy, Lady Duff-Gordon, famous as a fashion designer under the name Lucile.

The Literature Network says: “Glyn coined the term ‘It’ in her novel The Man and the Moment (1914) a 1920s euphemism for sex appeal of which the actress Clara Bow was the ‘It’ girl. Glyn herself was a vivacious green-eyed red-head who wrote high-spirited romances that dealt with aristocracy and issues of morality in society.” Indeed, her novels were often panned as scandalous and immature, though through today’s lens they are relatively tame.

Before There Was “50 Shades” …There Was Elinor Glyn’s “It”

Elinor Glyn and the Tiger Skin