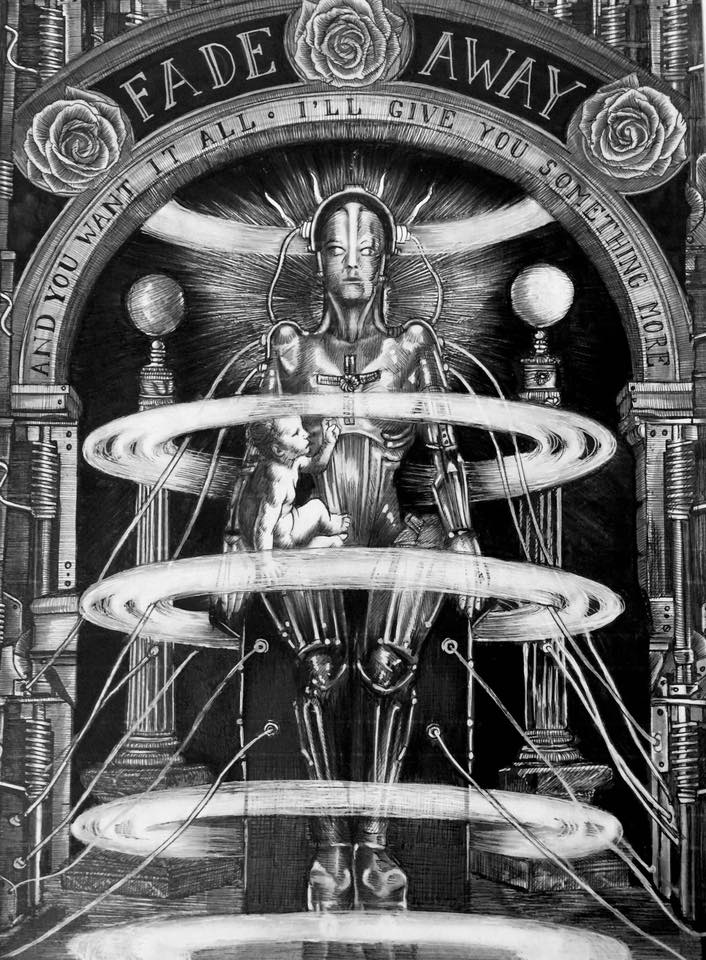 Robert Buratti, a member of OTO Australia’s Art Guild, Collective777, has announced another collaboration with the Canadian rock band Tea Party, creating a series of drawings which will be part of the group’s stage set-up on their upcoming tour dates. Fine art prints of these images will be offered for sale and the first one is now available. Buratti’s site explains:

“Earlier this year, Canadian rockers, The Tea Party announced a special tour to celebrate the 20th anniversary of the classic album, Transmission.

“Transmission is the fourth album recorded by the Canadian band The Tea Party, released in 1997. The band expanded on the mix of rock, blues and world music found in their previous albums by adding electronic instruments and recording techniques to their repertoire. While still using several exotic instruments and maintaining the “eastern” influence in the recording, many songs also include samples, sequencers and loops alongside the traditional acoustic instruments. The result is a harder, industrial sound.

“The album makes lyrical references to the afterlife (“Psychopomp”), the dystopian works of Aldous Huxley, George Orwell, Yevgeny Zamyatin (“Army Ants”) and Giovanni Piranesi’s ‘Imaginary Prisons’ (“Alarum”). Transmission continued to build on the momentum generated by The Edges of Twilight, reaching #3 on the Canadian album chart, double platinum status in Canada and receiving a 1998 Juno nomination for “Blockbuster Rock Album of the Year”.

“Following on from the successful 2015 collaboration with The Tea Party (The Edges of Twilight), Robert Buratti has once again been invited to create a series of original drawings, paintings and graphics for the 2017 Canadian and Australian tour. Buratti will complete 11 original works and 11 short films which will form part of the live show.

“We are proud to release the first fine art editions from this series for international sale.”