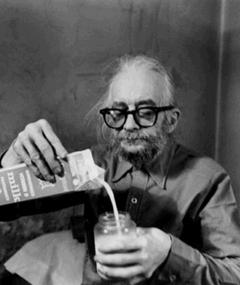 Mind UTTERLY blown! Famed avant-garde photographer/filmmaker Robert Frank (most of us know him from his association with the Rolling Stones, filming their instantly banned “Cocksucker Blues” tour documentary and contributing the photographs that comprised the cover of the “Exile On Mainstreet Album” was released his first film in decades – featuring…. EGC Bishop/seminal abstract art/filmmaker Harry Smith!

The film competed in the International Short Film Festival Oberhausen, earlier this Summer which is where our beloved OHO (and Harry’s host/roommate for a while!)

It’s currently viewable by subscribers to Mubi.com – and they are offering a FREE trial subscription! Here’s their synopsis:

“In 1984, upon learning that his friend Harry Smith was being evicted from the Breslin Hotel, Allen Ginsberg encouraged Robert Frank to use his new video camera to document the move. Over a one-week period, Smith shows Frank examples of his collection of art, books, indigenous recordings and films.”

And here’s Mubi.com’s take on the film:

“Renowned photographer and filmmaker Robert Frank has made his first new film in years: A time capsule of a touching and unique encounter between two iconoclastic artists in New York.”

You can watch it via free trial for the next month:

The film is also showing at the  Black Light: Secret Traditions in Art Since the 1950s Exhibit in Barcelona thanks to Hymenaeus Beta for the tip!