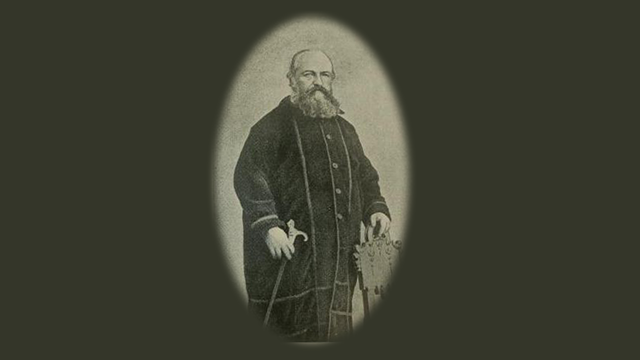 Today, May 31, is the Feast of Saint Alphonse Louis Constant, better known  by his pseudonym “Eliphas Lévi Zahed,” which is a translation of his name into Hebrew. Although known for many books on ritual Magic, Constant may be best remembered for his work regarding Baphomet. In Dogme et Rituel de la haute magie, he describes the image of Baphomet thus: “The goat on the frontispiece carries the sign of the pentagram on the forehead, with one point at the top, a symbol of light, his two hands forming the sign of hermetism, the one pointing up to the white moon of Chesed, the other pointing down to the black one of Geburah. This sign expresses the perfect harmony of mercy with justice. His one arm is female, the other male like the ones of the androgyne of Khunrath, the attributes of which we had to unite with those of our goat because he is one and the same symbol. The flame of intelligence shining between his horns is the magic light of the universal balance, the image of the soul elevated above matter, as the flame, whilst being tied to matter, shines above it. The ugly beast’s head expresses the horror of the sinner, whose materially acting, solely responsible part has to bear the punishment exclusively; because the soul is insensitive according to its nature and can only suffer when it materializes. The rod standing instead of genitals symbolizes eternal life, the body covered with scales the water, the semi- circle above it the atmosphere, the feathers following above the volatile. Humanity is represented by the two breasts and the androgyne arms of this sphinx of the occult sciences.”

According to the Invisible Basilica of Sabazius, “Aleister Crowley considered him to have been an Adeptus Major, as well as his own immediately previous incarnation. Crowley translated his La Clé des Grandes Mystéres (‘The Key of the Mysteries’ 1861), which Crowley considered to be his own Adeptus Exemptus thesis. Lévi’s Dogme et Rituel de la haute magie (1855-56 & 61, translated into English by A. E. Waite under the title ‘Transcendental Magic’) is included in the Liber E reading list and is required reading for entry to the probationer level of A:. A:.”

Celebrating the dualistic nature of Baphomet, here is a recipe to enjoy: