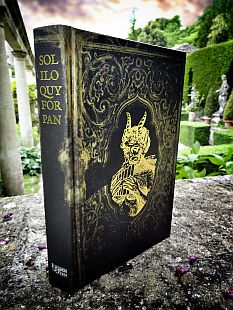 Egeaus Press’s most ambitious book, this mammoth 350 page compendium of new, previously unpublished fiction, essays and poetry along with lesser known archive material, in praise, in awe, in fear of the great god .

The full contents are as follows…

A Magical Invocation of Pan by Dion Fortune
The Rebirthing of Pan by Adrian Eckersley
Panic by R.B. Russell
The Maze at Huntsmere by Reggie Oliver
The Secret Woods by Lynda E. Rucker
Faun and Flora: A Garden for the Goat-God Pan by Sheryl Humphrey
Pan With Us by Robert Frost
A Song Out of Reach by John Howard
Lithe Tenant by Stephen J. Clark
Pan by A.C. Benson (from an epitaph in The Greek Anthology)
A New Pheidippioes by Henry Woodd Nevinson
Goskin Woods by Charles Schneider
Pan’s Pipes by Robert Louis Stevenson
The House of Pan by John Gale
The Company of the Lake by Jonathan Wood
The Role of Pan in Ritual, Magic & Poetry by Diane Champigny
Leaf-Foot, Petal-Mouth by Bethany van Rijswijk
The Rose-White Water by Colin Insole
The Death of Pan by Lord Dunsany
Meadow Saffron by Martin Jones
The Lady in the Yard by Rosanne Rabinowitz
An Old God Almost Dead: Pan in the 1940s by Nick Freeman
A Puzzling Affair by Ivar Campbell
South-West 13 by Nina Antonia
In Cypress Shades by Mark Valentine
Honey Moon by D.P. Watt
Summer Enchantment by Harry Fitzgerald

It is a sewn, lithographically printed volume with colour endpapers, and numerous antique illustrations through- out, limited to just 300 copies. ISBN 978-0-957160682.