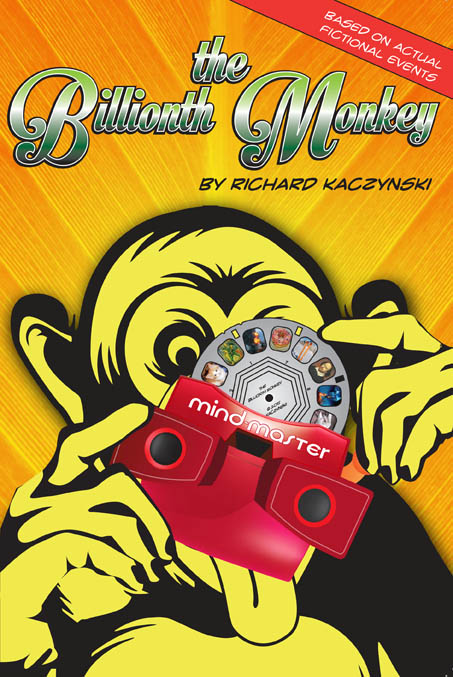 Readers of weird Fortean humor can celebrate the Year of the Monkey with a copy of Richard Kaczynski’s novel The Billionth Monkey. Between February 6–9, the ebook is discounted to $0.99 (iBook, Nook and Kindle).

The Billionth Monkey follows the hilarious life-and-death exploits of a nerdy folklorist and a goth who shouldn’t exist as they try to stop a bloodthirsty under-achiever from impossibly destroying the world. Along the way the story pays homage to fandom in all its forms, from Comic Con and Star Wars to Stanley Kubrick and horror movies. Dig a little deeper, and it’s also a cheeky indictment of the billion-plus users of social media with its echo chambers, confirmation biases, doubt merchants, and fake news. The novel questions reality and asks at what point the unreal takes on a life of its own.

As a bonus, The Billionth Monkey includes the six-page mini-comic Hamlet Special Edition. Illustrated by the legendary Greg LaRoqcue (The Flash, Legion of Super Heroes), it reimaginesHamlet’s opening scene “improved” a la the Star Wars special editions. Frugal readers can enjoy the comic for free at Stanley’s Marvelous Comics [www.stanleysmarvelouscomics.com].

This flash sale celebrates the Chinese Year of the Monkey, which begins on Monday, February 8, along with Fat Tuesday the following day…as the novel opens in New Orleans shortly after Mardi Gras. The Billionth Monkey is also available in paperback and as a signed and numbered hardcover edition limited to 100 copies. For details, see the author’s website. [http://www.richard-kaczynski.com/index.php/home/books/the-billionth-monkey/]

The Times Literary Supplement praised Richard Kaczynski’s Perdurabo: The Life of Aleister Crowley(2010) as “the major biography to date” of the Edwardian enfant terrible, while his Forgotten Templars: The Untold Origins of Ordo Templi Orientis (2012) has been lauded as a milestone in the study of Western esotericism. The Billionth Monkey is Richard’s first novel, and readers and reviewers alike have praised it with comparisons to Douglas Adams, Robert Anton Wilson, and Neil Gaiman.