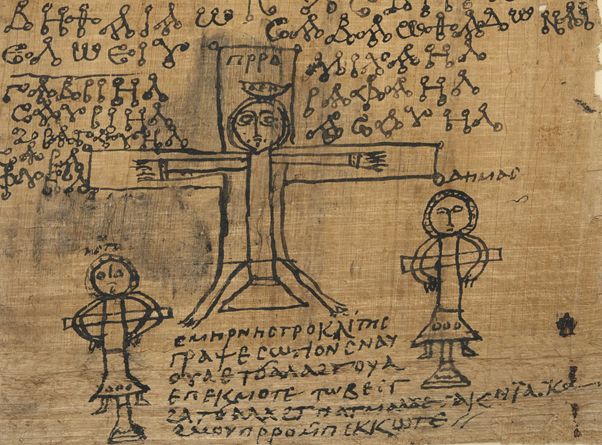 Here’s an interesting article posted at the Coptic Magical Papyri site which includes a prayer for protection from evil that references to Jesus’ storming of Hell during the three days between his death and resurrection – though if he was killed on a Friday and rose from the dead on Sunday you could say he was only dead on Saturday; yeah, that’s splittin’ hairs. An excerpt reads:

“British Library MS Or 6796 (4) + MS Or 6796 is a set of two sheets written on papyrus around 600 CE, and probably found in the region of Thebes in southern Egypt, where it was purchased for the British Museum in 1907, before being given to the British Library when it was separated from the Museum. Along with three other manuscripts, it belongs to an archive which was copied for or by a man named Severos, son of Ioanna. The manuscript contains a prayer for protection from evil, asking for Jesus and the archangels to be sent to the person using the ritual to protect them from demons and hostile magic by creating an enormous barrier 120 miles in radius.

“The manuscript ends with a drawing unique in the surviving magical corpus, of Jesus being crucified with the two thieves. Jesus himself wears a crown with the first three of the Greek vowels written upon it, symbols of the primal elements of the universe, and the word “king” (Coptic ⲡⲣⲣⲟ, p-rro) written above his head. Around him are written various sacred names, including those of God the Father and the seven archangels, written in the style of the magical symbols we call kharaktēres, with decorative circles at their points. The two thieves on either side of him are shown being crucified with their arms tied behind the horizontal branches of their crosses – this is a common feature of early depictions of the crucifixion, in which Jesus has his arms straight, while the thieves are crucified in what scholars of iconography call the ‘oriental’ form. Like Jesus, the two thieves have their names written above them – Gestas and Demas – slight variations of names which appear in apocrypha such as the Gospel of Nicodemus. While this may not be the most expert depiction – the artist seems to have become confused about where the body of Jesus ended and the cross began – it is well grounded in the Christian tradition, both in terms of its iconography and its use of the popular names of the characters.

“The text itself begins with a description of the moment of crucifixion, with jesus crying out the famous words, Eloi, Eloi,  Lama Sabakhthani, “My God, my God, why have you forsaken me?” in Aramaic; these are Jesus’ last words according to the Gospels of Mark and Matthew. He is given vinegar to drink, and says “My Father, all things have been completed”, events taken from the Gospel of John. He dies, the earth quakes, heaven opens, and the bodies of the dead rise and go to Jerusalem – events taken from Matthew again. Like most tellings of the crucifixion, then, this version draws upon several of the gospels at once to create a dramatic account of the story which is shown in the image below it.

“The crucial part of the text is still to come, however. Next, Jesus speaks in the first person, describing how he took a cup of water and spoke a prayer over it in the name of the powers of God the Father, whom he calls by his Hebrew name Iaō Sabaōth. He pours the cup of water into the sea, which parts to reveal a golden field at the bottom, in which lies a unicorn. The unicorn is surprised to see him, and demands:

‘Who are you who stands here thus, in the body, yea, in the flesh, who has not been given into my hand?’

“The unicorn is terrified by this, and flees from him.”

DON’T TRY THIS AT HOME!