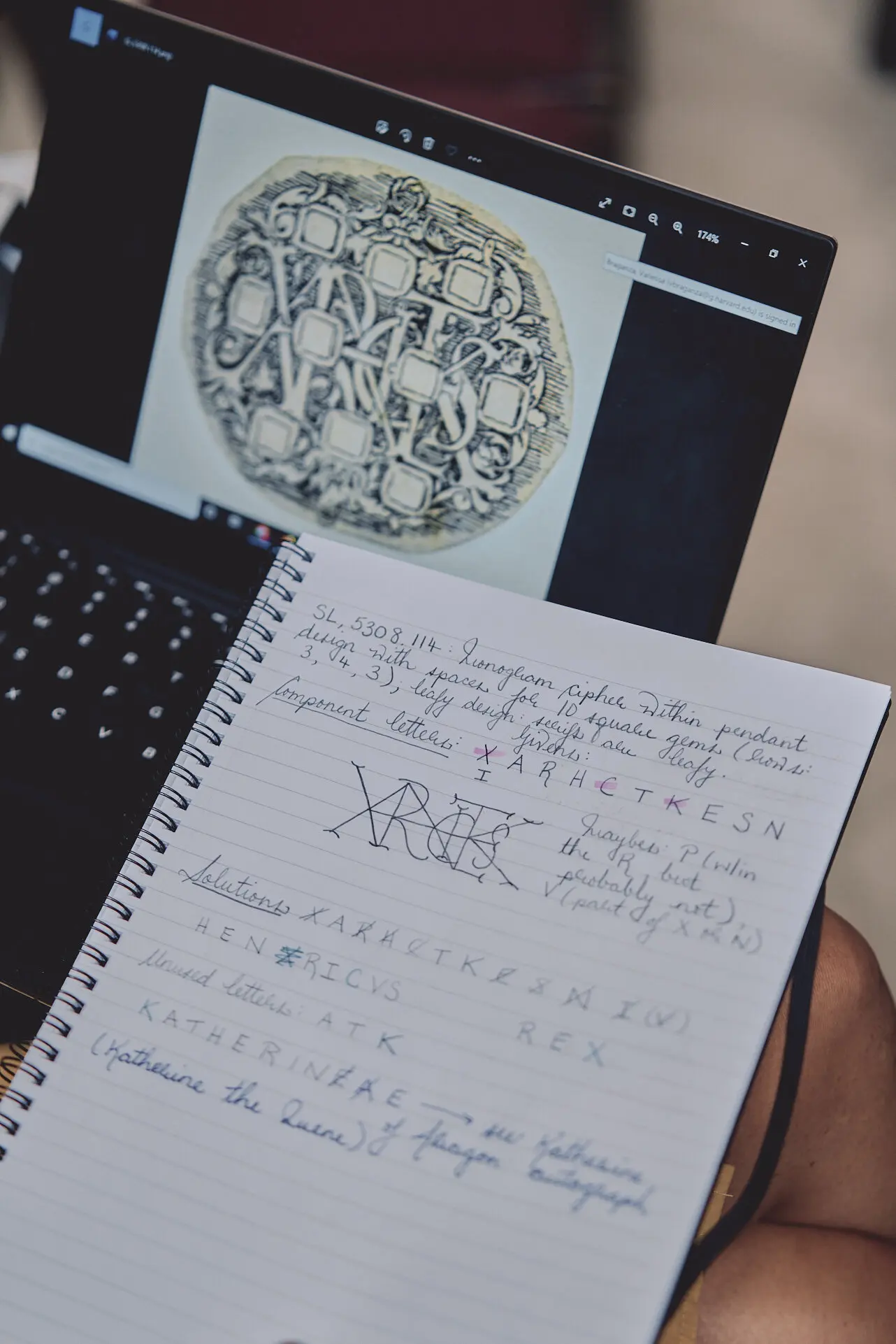 The New York Times ran an intriguing article. It addresses Dr. Vanessa Braganza’s study of a sketch for a piece of jewelry, she believes was commissioned by Catherine of Aragon, the first wife of Henry VIII. Dr. Braganza worked to decipher an especially knotty tangle of designs and letters, finally discerning it comprises the names of Henry and Catherine thoroughly intertwined. She believes this was meant as a declaration by Catherine of her inextricable interconnection with her husband, as well it might have been.

But I was struck by the cipher’s resemblance to what we’d term a sigil, i.e. a talismanic image. And I wonder if indeed this cipher was not merely an emblem but, effectively a spell to reinforce and energize the connections of these two. Keep in mind that Henry’s daughter Elizabeth I enlisted Dr. John Dee as her court astrologer also that the practices that’d be considered scientific as opposed to magical were still pretty well interwoven at that point in time.

Anyway, it’s some interesting speculation that perhaps someone might take the time to research.

“It has long been a beguiling and mysterious treasure of the British Museum: a collection of sketches for jewelry and other lavish ornaments, commissioned during the reign of Henry VIII from the artist Hans Holbein, for a time the court painter.

“Some of the designs are ciphers, or coded symbols, entangling the initials of Henry and his many paramours. Some of the most elaborate have never been decoded.

“This spring, while finishing a chapter of her dissertation, Vanessa Braganza, a Ph.D. candidate in English at Harvard and a self-described “book detective,” became fascinated by one particularly dense tangle of letters.

“By the end of the afternoon, Braganza thought she had figured it out in her notebook, via a trial-and-error process she compared to “early modern Wordle.” The cipher, she concluded, spelled out HENRICVS REX — Henry the King — and KATHERINE — his first wife, Catherine of Aragon.

“Nothing remarkable there, perhaps. But Braganza argues that the pendant was commissioned not by Henry but by Catherine during the period when he was trying to divorce her and marry Anne Boleyn, as a brazen assertion of her lifelong claim to be his one true wife and queen.”