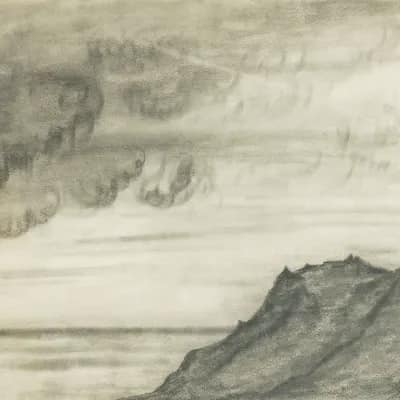 This Thursday, September 30, Forum Auctions in London will be offering a pencil drawing by the Prophet of the Lovely Star at auction. Their website says:

Crowley (Aleister) View of the Tyrrhenian Sea, probably from the hill behind the abbey of Thelema, Cefalù, Sicily, charcoal, [1921]

Crowley (Aleister, English occultist, ceremonial magician, poet, painter, novelist, and mountaineer, 1875-1947)View of the Tyrrhenian Sea, probably from the hill behind the abbey of Thelema, Cefalù, Sicily, charcoal on cream wove paper, signed with phallic initial ‘A’, inscribed with the number 17 and the astrological symbol of Aries in the lower right corner, sheet 320 x 420 mm (12 1/2 x 16 1/2 in), under glass, faint handling creases, minor surface dirt, framed, [1921]

⁂ Rare example of Crowley’s draughtsmanship, produced during his time on Cefalù where he established his religious community of Thelemites, the “Abbey of Thelema”. The picture can be approximately dated using the thelemic calendar, which starts in 1904; the year 1921 was the 17th year of the Aeon of Thelema, and the inscribed “date” with symbol of Aries places this work between March 20 and April 21. The point of focus within the present image appears to be the changing sky, with clouds dominating the picture with only small points of land and sea for reference.