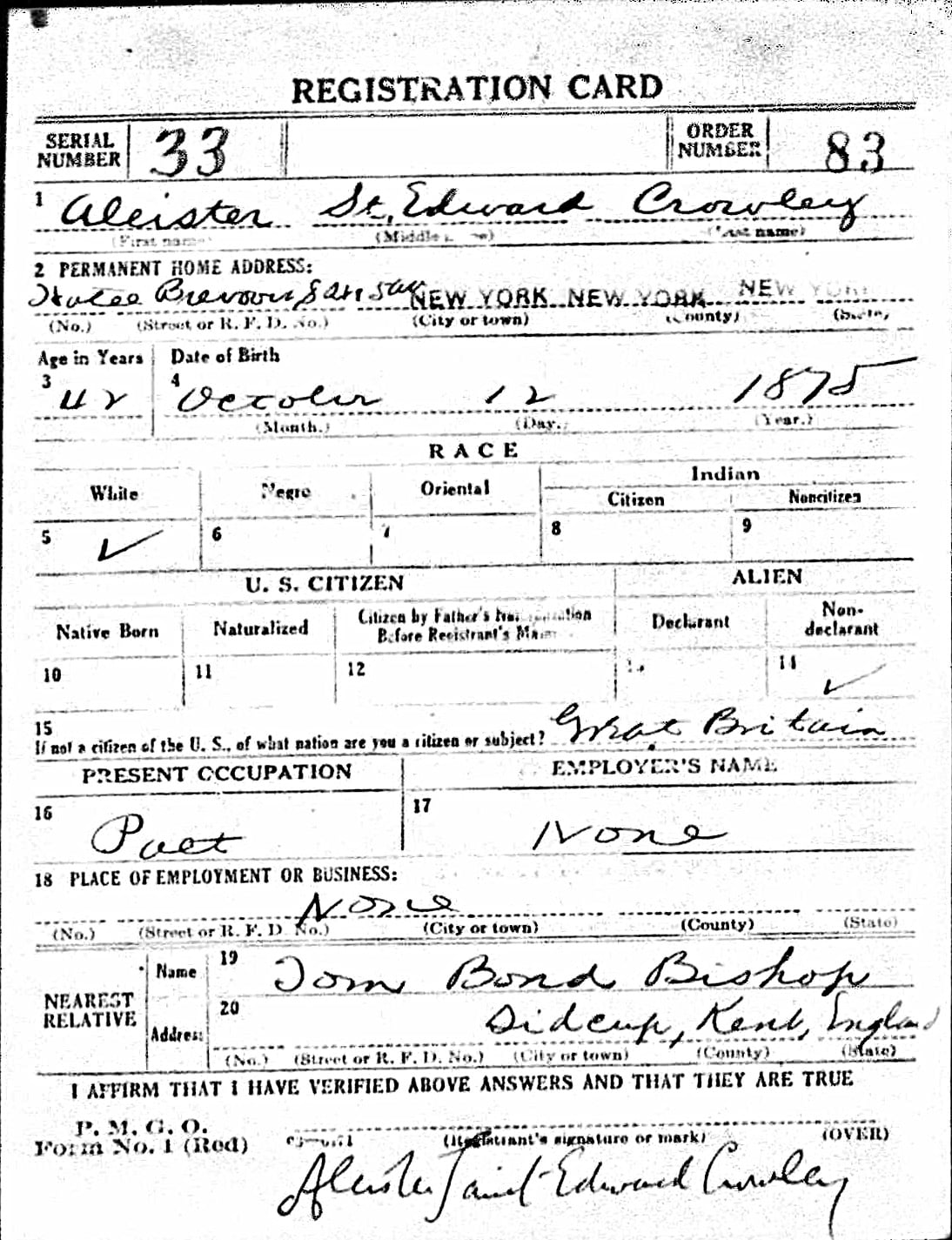 Ever wonder about the color of Aleister Crowley’s eyes? Some acquaintances have described them as brown or hazel, but Crowley himself says they were green.
According to the National Archives and Records Administration, “On May 18, 1917, Congress passed the Selective Service Act [which] required all men, regardless of citizenship, between the ages of 18 and 45 to register for the draft.” Shown here is Crowley’s U.S. draft registration card from September 12, 1918. It provides some interesting details in addition to his eye color.
He describes himself as tall (not medium or short) and stout (vs. slender or medium), with dark hair. Under disqualifying conditions, he puts “No” but adds “Partly bald.”
On the front page of the registration card, he records his name at the top as “Aleister St. Edward Crowley” (as was sometimes his wont, e.g., his 1912 OTO charter from Theodor Reuss and the 1913 M∴M∴M∴ constitution). At the bottom, he signs with a slightly less phallic version of his characteristic “cock and balls” A.
His permanent address is the Hotel Brevoort in New York City. This is consistent with the testimony of how Albert W. Ryerson (of the Universal Publishing Company, which distributed the 1919 blue Equinox) originally tracked down Crowley. See “Panic in Detroit” for details.
Crowley lists his occupation as “poet.”
Interestingly, he puts his maternal uncle, Tom Bond Bishop, as his nearest relative. Since his mother died on April 14, 1917, this makes sense. But it’s also ironic given how frequently Crowley taunted Bishop in his writings: from the fictional author of “White Stains” (1898) George Archibald Bishop; to name-checking Tom Bond Bishop in “Sword of Song” (1904), on line 167 of “Ascension Day” under the shoulder note “Poet defies his uncle” (p. 20 in the new Kamuret Press edition

); to his “Confessions” (1929), where he writes:
“Tom Bond Bishop was a prominent figure in religious and philanthropic circles in London. He held a more or less important position in the Custom House, but had no ambitions connected with the Civil Service. He devoted the whole of this spare time and energy to the propagation of the extraordinarily narrow, ignorant and bigoted Evangelicalism in which he believed. He had founded the Children’s Scripture Union and the Children’s Special Service Mission. […] Within his limits, he was a man of acute intelligence and great executive and organizing ability. A Manning plus bigoted sincerity; a Cotton Mather minus imagination; one might even say a Paul deprived of logical ability, and this defect supplied by invulnerable cocksureness. He was inaccessible to doubt; he ‘knew’ that he was ‘right’ on every point.” (p. 54). 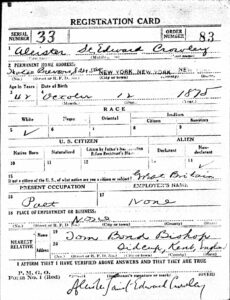 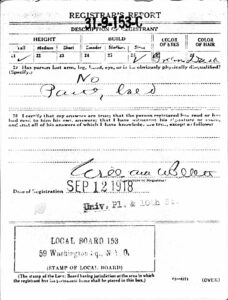