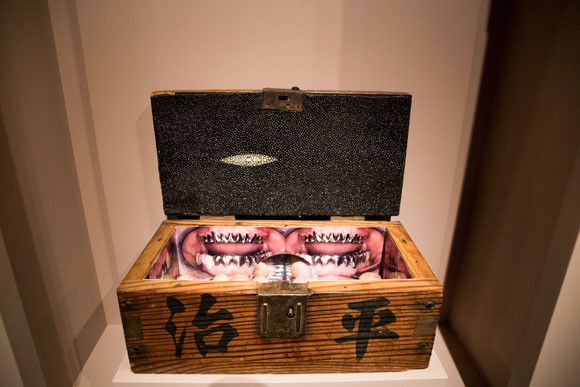 Could it be magick? The occult returns to the art world

Best known as a musical dissident with the proto-industrial bandThrobbing Gristle and later Psychic TV, Breyer P-Orridge has made visual art for decades as part of a ritualistic practice in which boundaries tend to blur. The first transmissions of musical noise started in the 1970s, but art has been part of the project from several years before then to the present day. Work of the more recent vintage makes up the bulk of Genesis Breyer P-Orridge: Try to Altar Everything, an exhibition on view at the Rubin Museum of Art in New York…….

“We’ve investigated lots of avenues and that includes occulture of various types,” says Breyer P-Orridge, who uses the word “we” exclusively in reference to a sort of individual and collective self. Early learning from occult figures like Aleister Crowley and mysterious magical sects like theOrdo Templi Orientis led to a lifelong devotion to ritualistic practice that has expanded and evolved.

S/he speaks highly still of “sex magic, where the orgasm is the moment when all forms of consciousness in your mind are joined, temporarily, and therefore you can pass a message through.” And other ceremonial endeavors involving age-old symbols and codes continue to be part of a method of art-making that is as much about the making as the end result……

……The exhibition, which continues through 1 August, arrives in the midst of a certain vogue for art attuned to occult practices. Last fall, a survey of demonic and deranged paintings by Marjorie Cameron, an associate of notorious rocket-scientist/occultist Jack Parsons and film-maker Kenneth Anger, showed at the gallery of prominent New York art maven Jeffrey Deitch. A group show titled Language of the Birds: Occult and Art gathered work by the likes of Brion Gysin, Jordan Belson, Anohni, Lionel Ziprin,Carol Bove and many more (including Breyer P-Orridge) in the 80WSE Gallery at New York University.

Alter to Everything Exhibition