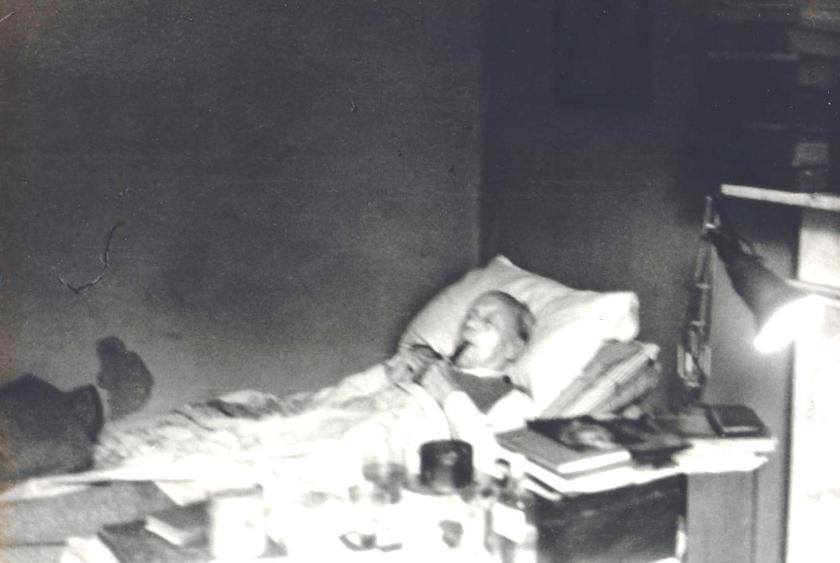 On this day, 70 years ago, Aleister Crowley died in his bed in a Victorian guest house called Netherwood in Hasting in rural England. Author Rodney Davies posted this account which he took from the landlady Kathleen “Johnny” Symonds. I do not vouch for the veracity of any of this. But it the account is pleasant and plausible enough:

“Despite his unenviable reputation and the fact that he insisted on greeting everyone with injunction ‘Do what thou wilt shall be the whole of the law’, the Great Beast proved a popular addition to the Netherwood household. He had considerable charm, a pleasing personality and was very erudite, which helped make him a good companion and a stimulating talker. He had many long conversations about all manner of subjects with Vernon Symonds.

“Crowley joined Hastings Chess Club, where ‘nobody ever beat him’, and he also took the time to tutor the Symonds’s nephew Roland, who later became a priest, in Latin. He sometimes went for walks along The Ridge, where on sunny days he would often stop and lean against a lamp post and hold his hands palms upwards to the sun, and he patronised a health hydro there named Riposo.

“‘He had many visitors,’ Mrs Symonds disclosed. ‘He had some people over from Germany who used to bring him lovely wine. And he had somebody who was in the army in Germany, who went afterwards to America.’

“Crowley’s English visitors included Kenneth Grant, author of Aleister Crowley and the Hidden God, Michael Houghton, the owner of the Atlantis Bookshop, John Symonds, who wrote The Magic of Aleister Crowley, and of course Louis Wilkinson.

“‘He had many parcels from America with boxes of chocolates (in them) when they were rationed here, and at one time he had boxes of chocolates stacked from floor to ceiling. And he had this very strong (peluke) tobacco made with molasses; and the smell of that tobacco stayed in the room for a long time after Crowley was gone. He also made friends with a local grocer named Mr Watson, who took him out for drives and would come and look after him.’

“As far as Johnny was aware, Crowley did not practise any magic, let alone ‘sex-magick’, at Netherwood, although this was probably because he was by then sexually impotent and physically ailing.

“Yet she poignantly recalled that ‘there was a film in Hastings called The Wizard of Oz, and he told me he would very much like to see it. But I said, “It wouldn’t interest you at all, it’s a children’s thing.” So he didn’t go!’

“Aleister Crowley’s health began seriously to deteriorate towards the end of 1947 — ‘He had a very bad chest, a sort of bronchitis’ — and despite the administrations of Dr Charnock-Smith and the efforts of Mrs Symonds ‘he got worse and worse and I think he died of pneumonia’, an event which happened on Monday, 1 December. He was cremated at Brighton on the following Friday.

“‘Mrs Thorne-Drury and myself followed the coffin from Hastings to Brighton. At the crematorium we found only a few mourners, perhaps two or three. I remember that a German lady placed some red roses on his coffin. There was no service. Louis Wilkinson, who had a beautiful voice, read his poem Pan and something else that Mr Crowley had written. When we got back to Netherwood in the taxi there was a tremendous thunderstorm with lightning, which continued for the whole of the night. Louis Wilkinson, who travelled back with us, said: “That’s just what Crowley would have liked”!’

“According to Johnny, Aleister Crowley was an easy-going, trouble-free resident, who not only spent much of his time in his room, but who rubbed along well with the other visitors and with her and her husband. Indeed, her feelings about him were entirely positive: ‘I liked him,’ she said. ‘He was great fun.’

You can read the entire account of his residency at Netherwood here: http://21stcenturyradio.com/articles/03/1001231.html