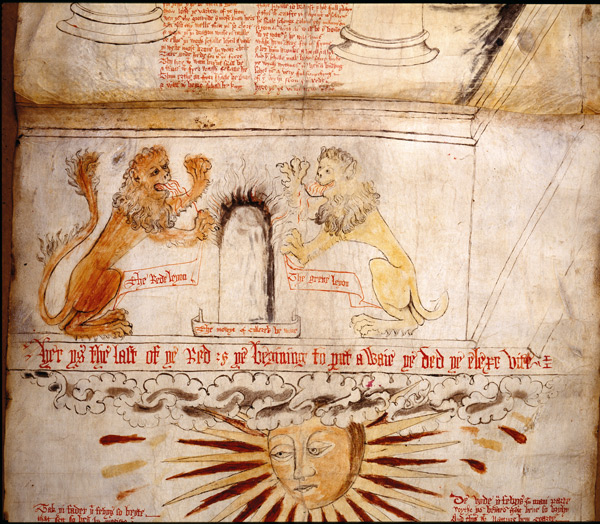 Christie’s auction house is putting THE RIPLEY SCROLL up on the block. This is an illustrated alchemical manuscript, in English and Latin, inscribed on vellum, originating in England from about 1624. The auction house states:

A rich and detailed mix of cryptic verse, legend and image, this is one of 23 known copies of The Ripley Scroll, a vivid and complex emblematic representation of the process to manufacture the Philosophers’ Stone — the prime alchemical quest — the means of converting base material into gold. Its composition was attributed to the foremost English alchemist, George Ripley (d. c.1490), author of The Compound of Alchemy. This is the only copy of The Ripley Scroll in private hands: one belonging to the British Library is currently a centrepiece in their exhibition Harry Potter: A History of Magic (until 28 February 2018).

Provenance: There is a colophon after the final text reading ‘Leonard Smethley fecit 1624’. An arms painter and deputy herald of this name is documented as resident and active in Manchester from 1612 until at least 1624. This would seem a suitable occupation for the compiler of thisScroll, particularly given the greater polish and confidence evident in the ‘heraldic’ motifs. In fact, this identification is confirmed by comparison with Smethley’s signatures on letters he wrote to Norroy, King of Arms, now included in a manuscript in Oxford (Bodleian Library Ashmole 836). John Dee, the renowned Tudor mathematician, astronomer, astrologer and researcher into the occult, who promoted Ripley’s reputation in England and abroad, was Warden of Christ’s College in Manchester from 1595 until 1605. Some of Dee’s books remained in the city when he returned to his family home in Mortlake. This is a suggestive circumstance: could it have been Dee’s copy of The Ripley Scroll that served as a model for Smethley? Or perhaps Dee’s continued influence in Manchester led to its production.

Content: George Ripley (d. c. 1490) was an Augustinian canon at Bridlington in Yorkshire who was the author of The Compound of Alchemy […] divided into Twelve Gates, a long poem in Middle English written in 1471 and published in 1591. Such was his authority and reputation that by 1700 a large body of alchemical works had been credited to him, including the most visibly arresting compilation, the Scroll that was given his name. It is now recognised that not all such attributions were justified and that it is safer to accept that The Ripley Scrolls should be regarded as composite works rather than the product of a single author: J.M. Rampling, ‘The Catalogue of the Ripley Corpus: Alchemical Writings attributed to George Ripley’, Ambix, 57/ii 2010, pp.125-201. Although it is accepted that the Middle English verses on the Scroll were compiled in the second half of the 15th century, only one is earlier than the middle of the 16th century and it is clear that the ideas it encompassed had currency into the Age of Reason. Alchemy was a practical as well as theoretical pursuit and, while at times controversial, it flourished as an accepted scientific and philosophical discipline. Isaac Newton’s alchemical investigations are well known and they even encompassed adaptations from a Ripley Scroll.

Seventeen of the 23 known copies of the Scroll, including the present example, have been grouped together based on their opening with a figure of an alchemist holding a glass flask; R.I. McCallum, ‘Alchemical Scrolls Associated with George Ripley’, in Mystical metal of gold: Essays on alchemy and Renaissance culture, ed. S.J. Linden, 2007, pp.161-88. The figure is often clearly intended as Hermes Trismegistus, considered the founder of western alchemical philosophy. The present Scroll is number 17 of McCallum’s Class 1, it was known only from an entry in a sale catalogue where it was not identified (London, Sotheby’s 19 December 2000, lot 1).

The composition is made up of a series of emblematic diagrams with inscriptions, labels and accompanying verses, each diagram leads into the next. It sets out in dramatic and intriguing, if ultimately perplexing, form the processes for achieving the two principal goals of alchemical experimentation: the production of the Philosophers’ Stone and the Elixir of Life. The basic building blocks, the Aristotelian elements of fire, earth, air and water, are all involved, as are the two ‘metallic principles’ of Sulphur and Mercury. All metals were believed to be made up of varying proportions of these two vapours, although a perfect balance was found only in gold. A related theory held that beneath the earth base metals were gradually digested until they matured into gold. The alchemists’ aim was to find a way to artificially accelerate this natural process: J.M. Rampling, ‘Theory choice in Medieval Alchemy’, in Theory Choice in the History of Chemical Practices, 2016 pp.7-16. Mercury was associated with the soul (anima) and the moon, and Sulphur with the spirit (spiritus) and the sun, accounting for the frequency of these images and labels in this Scroll. The Green Lion, the Red Lion and the Serpent of Arabia which also feature are allegorical representations of various products of distillation and calcination. The integration of alchemy with medieval Christianity and Christian iconography is also evident, particularly in the opening illustration with the central roundel showing the alchemist and a bishop holding a book with seven seals, each seal containing a glass flask holding figures, some recalling the scene of the Creation of Eve, and a further roundel culminating in a version of The Fall of Man. As a whole The Scrollserves as a dramatic and colourful witness to Medieval and Early Modern scientific and philosophical enquiry.

Illustration: The roll begins with a large figure holding a glass flask, the Hermetic vessel or Philosopher’s Egg, the handles inscribed ’You must make water of earth and earth of the ayr and ayr of the fyre and fyre of the earth’. Within his flask there are eight linked roundels, seven of them containing experimenting figures, apparently female as well as male, watching a flask or retort over a furnace, the glass vessels contain small naked figures. The eighth roundel contains the sun and the moon pouring rays onto Adam and Eve either side of the Tree of Knowledge complete with serpent, they are flanked by two figures wielding tools and at the front there are two small lions, one green and one red and a dog. The seven roundels which show practical operations relate successive stages in the alchemical process and are joined by cords to a larger central roundel, where they connect to a book held by two seated figures, one the alchemist and the other a figure wearing a bishop’s mitre.

In the neck of the main flask there is a spread-eagled toad surrounded by drops of blood. The flask sits upon a furnace inscribed ‘Here is the last of the whyte stone and the beginning of the red’. Below this an arch surmounted by flames (identified as the ‘Mouth of Collarick be ware’) springs from the branches of a tree, with leaves labelled ‘spiritus’ and ‘anima’, beneath the branches a sun with feathers in its mouth and a moon with feathers beside it. They flank a human-headed lizard-like figure that hangs from the branches and reaches out to a boy (once naked) seated in an aureole atop a grapevine that winds around the tree-trunk. The vine is held by a naked male and female, who stand beside the tree in a six-sided turretted basin, each turret bearing an alchemist holding a glass flask, three of them emptying their contents respectively into a sun, a moon and the basin, flames emanate from the turret bases.

Below this structure is another basin with a male figure grasping a central column flanked by a man in an aureole labelled ‘anima’ and ‘oyle’ and an angel labelled ‘spiritus’ and ‘water’. The four turrets at the corners of this square basin carry flasks labelled fire, earth, air and water. Underneath the basin an inscription reads ‘the red sea the red luna the red soll’, above a green dragon, ’The Dragon Grinn or Grien’, spewing out a toad, ‘The Tawning venime’, above a panel of text. A heading ‘Here is the last of the red and beginning to put away the dead’: this presumably indicates that the red stone – the transmuting Philosophers’ Stone – has been made and the process will continue with the manufacture of the Elixir of Life: the new process begins with a red lion and a green lion that sit to either side of a blazing furnace mouth, labelled ‘The mouth of colrick be ware’.

The next image shows the Bird of Hermes, a crowned human-headed bird with wings outstretched beneath a blazing sun standing on an orb of blue sea stuck with feathers, beneath is a scroll with verses in English. A new section is headed ‘The red sea the red soll the red elixir vita’, and shows a sun of black, white and yellow that contains three linked disks of yellow, white and black labelled ‘The Red stone’, ‘The White stone’ and ‘The Elixir vita’. The sun sits on the points of a crescent moon of black, white and yellow and the moon is balanced on a green dragon biting its tail and standing on a winged Mappa Mundi orb, blood from the dragon’s belly descending into three circles in the watery surface of the globe. The Scroll ends with a drawing of a man holding a staff with a scroll at one end and a horse’s hoof at the other (George Ripley?) looking and indicating upwards, beneath his feet a block of English verses headed ‘The Description and Generation and Operation of the Dragon’, identifying the green dragon as the Serpent of Arabie; in other Ripley Scrolls, these verses are usually located beneath the dragon and before the standing figure. The text ends with the signature ‘Leonard Smethley fecit 1624’.

3720 x 275mm overall, seven membranes of varying widths and lengths (tears and losses at head reinforced with vellum, some ‘fraying’ at sides particularly of first membrane, reinforcing stitching of first membrane to second, grubby on verso at top, rubbed and creased with some ink and pigment loss, particularly affecting first membrane).
This Scroll was reproduced in Peter Beal, A Dictionary of English Manuscript Terminology: 1450-2000, 2008, pp.11-13 exemplifying Alchemical manuscripts.

If you want to bid in, check for details here: