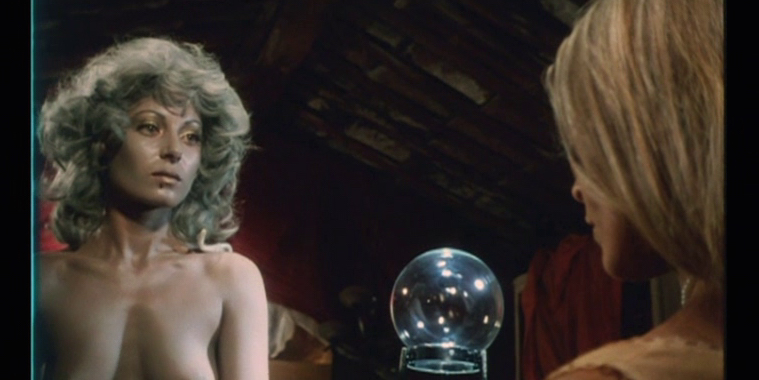 Mario Mercier steeped himself in the very rich French tradition of writer-filmmakers, such as Fernando Arrabal, Alain Robbe-Grillet, Jean Rollin, or José Larraz. It’s scarcely surprising, in my opinion, as many filmmakers of the European fantastique show inventiveness and an indisputable aesthetic sense- the fruits of a reflection that one can follow traces of in their writings. For example, the understanding of the film work of Jean Rollin resides, to me, in the frequenting of his literary work. There is not one without the other. It is the same with Robbe-Grillet. When I learned that Mario Mercier was a writer, I immediately began inquiring about and trying to obtain his books. This was difficult on all fronts: Two of the books had been censured by the French, one was in a collection of stories by a marginal publishing company, and one book was practically lost. These searches taught me that Mario Mercier had equally published numerous works on reflection, and the spiritual search… 1970″These drawings are are a surprising balancing act between the esoteric art and the historic art of the fauves and the history they perpetuated” said New York “occult art” dealer Stephen Romano, who’se curatorial credits include “Opus Hypnagogia” at Morbid Anatomy Museum (see the review in the New York Times), “Magica Sexualis” co-curated with artist Barry William Hale which was deemed the best occult culture event of 2015 by Spiral Nature, among many others. “This work feels to have been born as hybrid of the Fauves, HAXAN, Jacob Bohme and Carlos Casteneda, and a true concern and avocacy for spiritual growth and healing rather than SCHOCK / POP varitety of so called “horror art” we see perpetuated today. “

Romano added ” I have a collection of Mario Mercier euphemera. His cinematic masterpiece “La Goulve” from 1972 is a masterpiece of esoteric erotica and was decades ahead of it’s time. Like most true visonaries however, such as William Mortnesen and Darcilio Lima, he was too much for his time, too much to be digested by the audience, and was subsequently left unacknowledged for the genius his slim catalog of films allude to.” “The truth is, Mario Mercier’s ouvre belongs in a special parthenon of artist who’s role is as shaman in opur culture, to use atr as a weapon against the shrinking and dumbing down of our consciousness, and instead an attempt to empower the artist and viewer alike with a higher purpose, one of the healer, the conduit by which we are unfied, not seperated and pitted against one another becuase of our difference. The role of the artist as shaman is to re-inject the sense of hopefulness, optimist, wonder and magic into our culture. This is what Mario Mercier’s works, be they his early cinematic efforts, his novels or his drawings were intended for..” Aeron Alfrey, who directs the popular site monsterbrains.com said of Mario Mercier’s art: “The work of Mario Mercier is haunted by featureless mannequin like characters drifting through fragmented dreamscapes. The charcoal medium plays into the idea that each scene is filled with whisps of smoke, ghostly forms solidified into deranged configurations. The warped symbology of dream logic is strewn through narrative moments of unknowable events, leaving behind questions better left unanswered.” New York artist and singer Alexis Karl, who’se artwork was exhibited alongside vintage press photos (see below) of Mario Mercier’s “La Goulve” in BLAM Gallery’s “Materia Prima” exhibition, said of the works: “Mario’s work is like dream-walking into another world.. one that seems to hold the arcane secrets of sex and magic, one that dives into darker realms of consciousness and thrums with the essence of ritual. He is myth writing, quietly reminding us of tales we have always know, but have somehow, in this loud urban world, managed to forget.” “Mario Mercier is infamous for illuminating tales of Witchcraft, Magick & Possession on controversial Celluloid’. Lesser know is the dark ‘Chamanic’ world of his Charcoal drawings which speak in images of a dark and personal spiritual world which seems to exist in a liminal Arcadia somewhere between the celestial and chthonic. In his drawing we see the exotic esoterica of his film making expressed in the sensuality of line, and dreamlike quality which seems to illustrate an elaborate and deeply personal mythical narrative.

His choice of medium is deliberate and elemental, from the charred wood of the Shaman’s fire that his shadowy visions are drawn on the parchment cave walls of his psych.”………