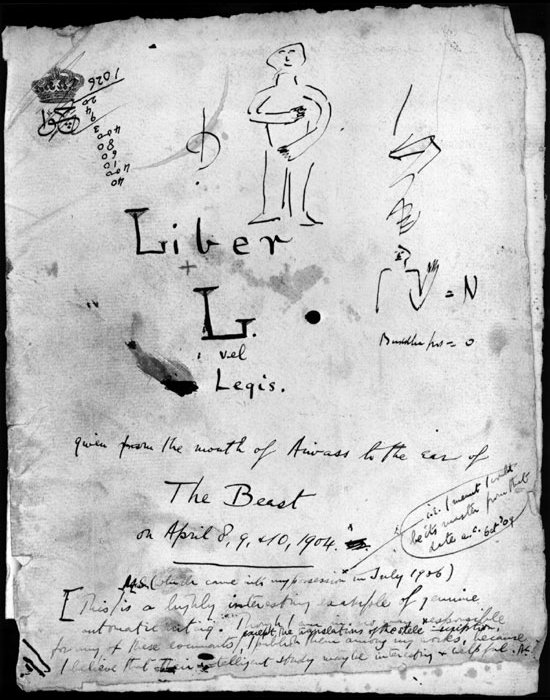 Today is the 112th anniversary of the reception of The Book Of The Law, one of the Feasts prescribed in Liber XV, the Gnostic Mass.

Crowley said he wrote The Book of the Law on 8, 9 and 10 April 1904, between the hours of noon and 1:00 pm, in the flat where he and his new wife were staying for their honeymoon, which he described as being near the Boulak Museum in a fashionable European quarter of Cairo, let by the firm Congdon & Co. The apartment was on the ground floor, and the “temple” was the drawing room.

Crowley described the encounter in detail in The Equinox of the Gods, saying that as he sat at his desk in Cairo, the voice of Aiwass came from over his left shoulder in the furthest corner of the room. This voice is described as passionate and hurried, and was “of deep timbre, musical and expressive, its tones solemn, voluptuous, tender, fierce or aught else as suited the moods of the message. Not bass—perhaps a rich tenor or baritone.” Further, the voice was devoid of “native or foreign accent”.

Crowley also got a “strong impression” of the speaker’s general appearance. Aiwass had a body composed of “fine matter,” which had a gauze-like transparency. Further, he “seemed to be a tall, dark man in his thirties, well-knit, active and strong, with the face of a savage king, and eyes veiled lest their gaze should destroy what they saw. The dress was not Arab; it suggested Assyria or Persia, but very vaguely.”

Despite initially writing that it was an “excellent example of automatic writing,” Crowley later insisted that it was not just automatic writing (though the writing included aspects of this, since when Crowley tried to stop writing he was compelled to continue. The writing also recorded Crowley’s own thoughts). Rather he said that the experience was exactly like an actual voice speaking to him. This resulted in a few transcription errors, about which the scribe had to later inquire.

Note, moreover, with what greedy vanity I claim authorship even of all the other A∴A∴ Books in Class A, though I wrote them inspired beyond all I know to be I. Yet in these Books did Aleister Crowley, the master of English both in prose and in verse, partake insofar as he was That. Compare those Books with The Book of the Law! The style [of the former] is simple and sublime; the imagery is gorgeous and faultless; the rhythm is subtle and intoxicating; the theme is interpreted in faultless symphony. There are no errors of grammar, no infelicities of phrase. Each Book is perfect in its kind.

I, daring to snatch credit for these […] dared nowise to lay claim to have touched The Book of the Law, not with my littlest finger-tip.

He also admits to the possibility that Aiwass may be identified with his own subconscious, although he thought this was unlikely:

Of course I wrote them, ink on paper, in the material sense; but they are not My words, unless Aiwaz be taken to be no more than my subconscious self, or some part of it: in that case, my conscious self being ignorant of the Truth in the Book and hostile to most of the ethics and philosophy of the Book, Aiwaz is a severely suppressed part of me. Such a theory would further imply that I am, unknown to myself, possessed of all sorts of praeternatural knowledge and power.

You can find a holographic edition of this scripture online here: On the left hand side you’ll find a tool bar that includes the button “Next Page” with which you can scroll through the entire chapter.