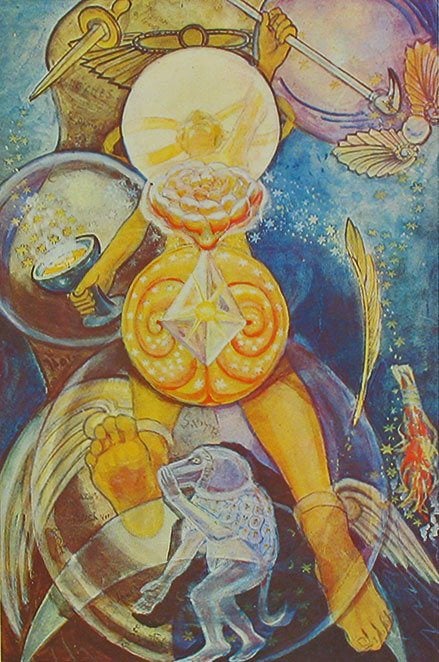 Frater Orpheus recently posted alternate versions of the Thoth Tarot deck’s Magus cards by Frieda Lady Harris. His FB post says:
“One is the Magus: twain his forces: four his weapons…By His Wisdom made He the Worlds; the Word that is God is none other than He… He is the First and the Last. (Liber B vel Magi)
“Though I first published the images of the alternate Magus cards from the Thoth deck a few years ago the topic came up in one of the Thelemic [Facebook] groups today and it became clear that several there had not seen all of these – so I am again sharing all seven of these for those who didn’t catch them the first time around.
They were all done in gouache and graphite on paper laminated on cardboard measuring approximately 550 X 380mm. Almost all the original gouaches were given by Frieda Harris to Crowley’s disciple, Gerald Yorke, who bequeathed them to the Warburg Institute in London where they are kept today. However, over the years a few of the alternates have begun to appear from private collections.
“For those of you who do not know Crowley worked closely with the artist Frieda Harris, who was also a student and member of the A.’.A.’., in the creation of this deck. Crowley wrote of Harris, “She devoted her genius to the Work.” With incredible speed she picked up the rhythm, and with inexhaustible patience submitted to the correction of the fanatical slave-driver that she had invoked, often painting the same card as many times until he measured up to his Vanadium Steel yardstick! “
It was only after Crowley’s death that the “Thoth” tarot was published in 1969 by the Ordo Templi Orientis under Grady McMurtry. This deck remains in production today and has become a classic of the modern tarot .”
Enjoy – Orpheus