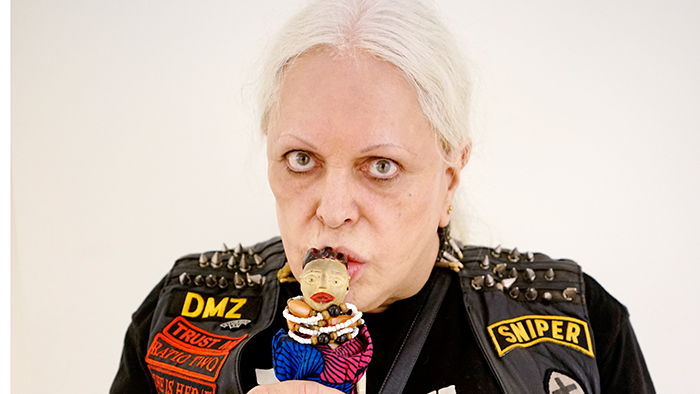 The Reprobate magazine has announced a night of cinematic transgression at London’s Horse Hospital on March 8th, under the title Nova Nights: Progressive Transgressive and Underground. The magazine’s announcement says:

“The evening will consist of three slots. Change Itself – An Art Apart: Genesis P. Orridge is a 2016 film by Swedish director Carl Abrahamsson, and as the title suggests, is a documentary about the always interesting leader of Psychic TV, and former member of Throbbing Gristle, Coum Transmissions and multi-media art terrorist. It’s accompanied by a talk by writer AD Hitchin about the continued cultural relevance of Orridge.

“Also from Abrahamsson is Sub Umbra Luna, a 2016 tribute to Derek Jarman’s In the Shadow of the Sun, and closing the event is the premier of Billy Chainsaw and Chris Collier’s three minute cut up film Dementia, followed by more spoken word by Hitchin.”

To sum up the life and work of British artist Genesis Breyer P-Orridge is close to impossible. Not only because of the wide range of artistic disciplines, but also because of the timespan, since the mid 1960s to the present day, that has been saturated by musical projects like Throbbing Gristle and Psychic TV, hundreds of records, thousands of concerts, exhibitions, interviews, videos, spoken word performances, collages, sculptures, philosophy, cultural engineering, occultism and radical transgender concepts. A couple of descriptions are still valid after these 50 years of active creativity and provocation. P-Orridge is a romantic existentialist and a cultural engineer. Everything is both work as such and seed for cultural and behavioral change.

+ AD HITCHIN ‘live’
His thoughts on the importance and continued relevance of Genesis P-Orridge.

A tribute to Derek Jarman’s super 8 epic IN THE SHADOW OF THE SUN (1975, with music by Throbbing Gristle, 1980). Principally shot on super 8 and 16 mm film, SUB UMBRA ALARUM LUNA pays deserved respect to a highly influential film (and its maker).

Carl Abrahamsson in his owns words: “I’m a Swedish freelance writer specialising in material about the arts & entertainment, esoteric history, occulture and portraits for the international market. I also lecture on all of the mentioned subjects at art schools, universities, events, symposia and conferences. I also work as a consultant in regard to text editing and printed matter for publishing companies, magazines and record labels. I also work with filmmaking, in publishing, photography and music.”

World premiere of Billy Chainsaw and Chris Collier’s CUT UP created as a visual accompaniment to AD Hitchen’s DEMENTIA – from the author’s recently published book CONSENSUAL.

A.D. HITCHIN is a writer, artist and misanthrope with an antinomian streak. He began his career on the avant-garde scene and his work with the cut up method has been discussed by academia and appeared in many magazines, websites and publications, culminating in co-editing CUT UP! An Anthology inspired by the CUT UP Method of William S. Burroughs & Brion Gysin. Hitchin marked his move away from more cryptic, abstract work with the publication of CONSENSUAL, an exploration of sex, death, misanthropy and sadism, described by one reviewer as ‘a sexual, sacrificial tour through the darkest recesses of his psyche’. He lives in a cabin somewhere in the south east of England where he avoids as many other people as possible and continues his work.