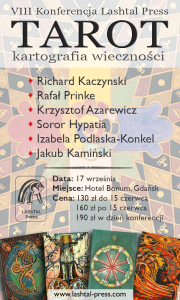 LaShTAL Press has announced that it’s 8th Conference will be held September 17 in Gdansk Poland.  The event will be focused on the tarot, and among the speakers presenting will be special guest Richard Kaczynski, author of the best biography of Aleister Crowley, “Perdurabo.” Here’s a list of the speakers and presentations scheduled:

Although textbook Thoth Tarot, the “Book of Thoth”, lived to see the publication in 1944, that same waist appeared after the death of its creators. However, since its first edition, which took place around 1970, the complex symbolism occult philosopher Aleister Crowley (1875-1947) and the amazing illustrations made by Lady Frieda Harris (1877-1962) attracted the attention of many visual artists and appeared in television programs, movies, comic books and popular music. In this presentation, Richard traces the process of Thoth Tarot and show how it was encoded in the visual lexicon of pop culture.

The creation and history of the occult interpretation tarot cards

The oldest known decks of cards to the Italian game Trionfi (later called tarocchi) from the first half of the fifteenth century. Although specific to their trump card presented symbolic ideas, today partly perceived as esoteric, most of them can be considered typical for the era allegory. The assignment of tarot cards function relay secret teachings of ancient Egypt took place only in 1781., And creator of this theory was a French pastor, freemason and scholar Antoine Court de GEBELIN. During the nineteenth century. Tarot has become an integral part of reviving the tradition of hermetic and his occult interpretations have become increasingly diverse. In the next century, especially its second half, there has been an explosion of graphic realization of tarot cards, some of which were also re-interpretation of hidden meanings esoteric. The lecture will outline the main steps in the formation of occult tarot, illustrated by numerous examples of the most important (or most interesting) waist.

Thoth Tarot offers an incredibly rich and complex insight into the nature of man and the universe. Zealous aspirants explores the western tradition of a mystery use it as a multi-level textbook that allows penetration of the mysteries of existence. One of the leading portals directly into the heart of these mysteries is sexual alchemy. During the lecture spiced spicy details Krzysztof share discoveries with over twenty years of working with this remarkable deck.

Tarot as a tool for divination

Tarot stands out from other systems divining. It does not require long-term study, to start him foretell. However, you need to know how to use it and know the health and safety working with tabs to effectively use its suggestions concerning the present and the future. During the lecture, Izabela will show the advantages of the tarot as a tool of divination divinatory and principles of it. Together with the participants przećwiczy these principles in practice. Will also present scheme tarot session with the client and discuss the pitfalls which must be avoided in working with tabs.

“Good for the game of bridge …”. Secrets of the Waite-Smith deck

In his review deck Waite-Smith (The Equinox, Volume I, Number III) Aleister Crowley stated that worth to save it are only minor arcana, which can be used to … the game of bridge. Is one of the world’s most popular tarot deck deserves such a critical assessment? Arthur Edward Waite – a member of the Order of the Golden Dawn, and later even the leader of one of the factions – was named by the expert Kabbalah Gershom Scholem “mystically minded scholar Christian.” Kim was really Waite? Those in the know? Scholar? Pompous poseur? What approach had the tarot? What relationship united him with the artist Pamela Colman Smith ,? How did the work on the preparation of this deck? In the end – what secrets hides in itself?

In this lecture Soror Hypatia will focus on practical work with the tarot. Thoth Tarot and the Rider-Waite decks are the two most popular in the world. Both have their own personality. Sometimes subtle, sometimes large differences between them require the operator to read them in a different way. The result is two different interpretations of the distribution. To read cards affect their structure, artistry, symbolism and power. If you have mastered the distribution known as the Celtic Cross, whether you are ready to master the complex operations of the “Book of Thoth”?

For more information and to register visit: http://lashtal-press.com/viii-konferencja-lashtal-press-we-wrzesniu/