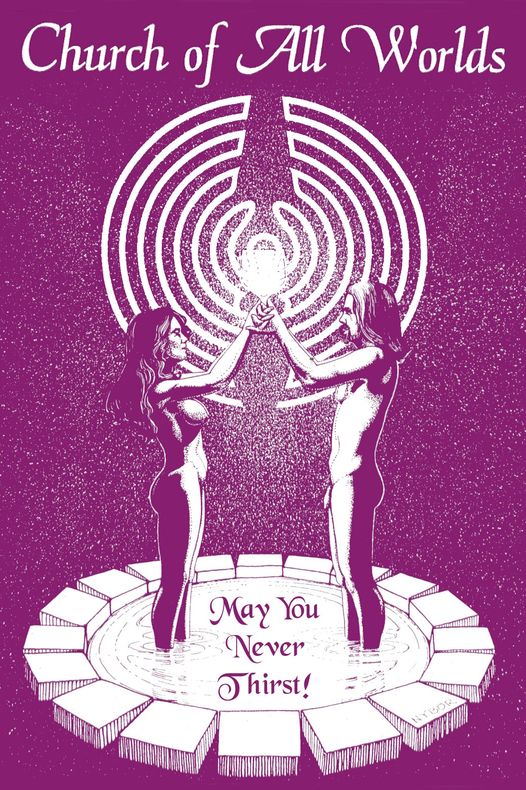 Today is the the 60th Anniversary the conception of the Church of All Worlds. Based on the Robert Heinlein novel Stranger in A Strange Land one might well feel that there was a significant influence from the writings of Aleister Crowley and perhaps the goings on a Agape Lodge in Los Angeles, especially Jack Parsons who was also part of the local Sci Fi scene. The Church of All Worlds FB page says:
“LANCE CHRISTIE: At the beginning of our first year in college [1961], I ran into Tim Zell during the pledge week. We were in the anteroom of one of the fraternities. One or the other of us, I don’t remember which, made some sort of wisecrack about the strange customs of the natives. The other one of us responded, “Ah! Somebody else who has the same view of things that I do.” Later on he told me that I was the first person he had ever met who seemed to be a member of the same species that he was.
“OZ: The October 1961 book-of-the-month selection of the Science Fiction Book Club was a new novel by Robert Heinlein called Stranger in a Strange Land. Lance was a subscriber and he got the book. He took it home and read it over Christmas vacation. When he got back he handed it to me and said, “You have got to read this!” So I did. There was an incredible sense of recognition—here was someone who understood us and was talking to us. And the ideas that he was putting forth were all ones that we resonated with on so many levels.
“Having been an avid reader of Heinlein’s juveniles all through high school, I was really ready for SISL. As the protagonists in his previous works had all been my age progressively, so it was with the newest one: Valentine Michael Smith—as an infant, the sole survivor of the first attempted manned expedition to Mars, which crashed upon landing. The baby is rescued and raised by native Martians, in their ancient and wise culture—with no idea of his human heritage. 25 years later, a second expedition succeeds in reaching Mars intact, and brings Michael back to a homeworld he’s never known…with his Martian-trained mental abilities and alien cultural perspective. A perspective uncannily like that of Lance and myself.
“In the novel, Michael establishes the “Church of All Worlds,” built around “nests”—a fusion of congregation, group marriage, and intentional community. A key concept is grokking (literally, “drinking”), i.e. the ability to be fully empathic. Thus the sharing of water is the most profound act of communion between two people—or a group.
“Heinlein’s SISL introduced us to the ideas of immanent divinity (“thou art God”), pantheism (“all that groks is god”), sacraments (water sharing), priestesses, social and ritual nakedness, intimate extended families as a basis for community; and, of course, open, loving relationships without jealousy, and joyous expression of sexuality as divine union. By defining love as “that condition wherein another person’s happiness is essential to your own,” SISL changed forever the parameters of our relationships with each other—especially in the sexual arena. And all this in the context of a legal religious organization—a “church”—which could have all the rights and privileges granted to the mighty Church of Rome! This was heady stuff, and we drank it up.
“LANCE: We talked a lot about the possibilities that were available to human beings to take a different path, in respect to the way society was put together and the premises on which it was founded. That’s where Stranger had such a powerful affect. Heinlein constellated the idea of trying to work out and install a different set of cultural premises, to develop an alternative human civilization based on more enlightened concepts about human beings, their relationships to each other, their relationships to the natural world, and the purpose and conduct of life, what constitutes right livelihood, what constitutes right action and so on.
“We didn’t have those terms at the time. OZ and I were very early in receiving this impulse from the collective unconscious, and we were more cognitively differentiated and sensitive to it than the other people around us at the time. It doesn’t mean that we were superior in some sort of cosmic sense. We were just able to receive the signal at an earlier time than a large number of other people who have since started to receive the signal and recognize it.
“OZ: In Stranger, sharing water, and saying “Water shared is life shared,” is the fundamental ritual of the book. So on April 7, 1962, Lance and I sat down in a field, shared water and became water brothers, dedicating ourselves to creating a life based on the principles that were in this book—and to trying to actualize them and manifest them into reality. That was essentially the founding event of what eventually became the Church of All Worlds—as well as the Association for the Tree of Life.
And the rest is Mystery…” 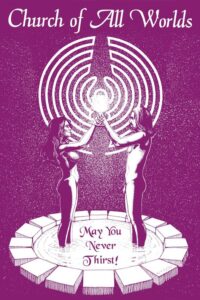