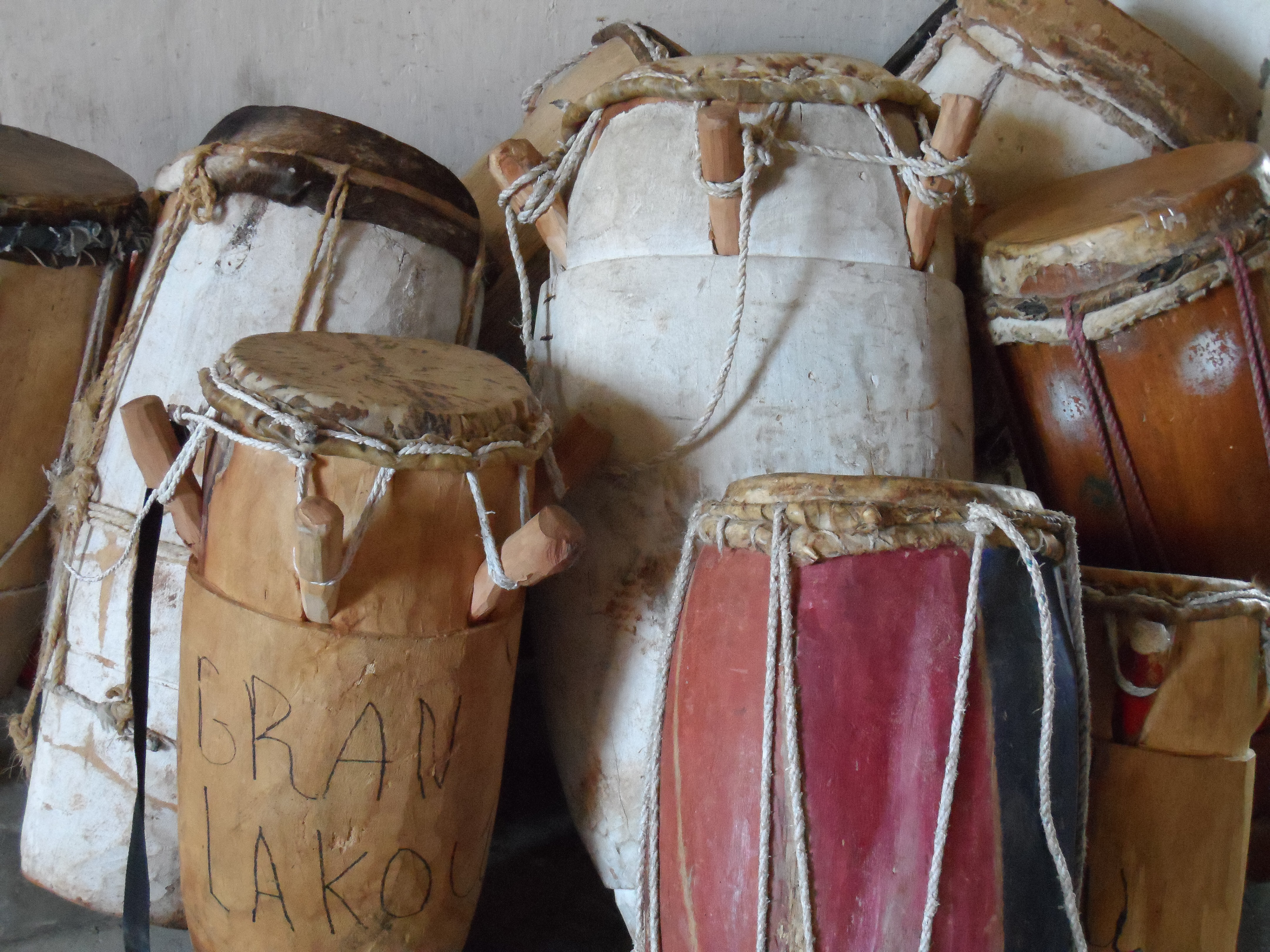 According to the Wikipedia article: ” Haitian Vodou is a henotheistic religion, although viewed by many Haitians as a cultural practice, widely practiced in the country of Haiti. Vodou as practiced in urban centres in Haiti and some cities in North America (especially New Orleans) is a ritualistic faith system that involves ceremonies that consist of singing, drumming and dancing…

“There are so many subtleties and complexities in Haitian drumming, particularly in its relation to the rites and rituals of Vodou, that an overview of this kind cannot truly describe them in any detail. For instance, many of the rhythms have variations, each with their own subtitles, each assisting different loa. A good example of this is found in the Mahi rhythm – Mahi Darielle, Mahi Japeté and Mahi Deté are all variations of Mahi Simp (from the French Simple). However, some discussion of forms and techniques involved is essential.

“An extremely important aspect of the performance of this music is the Kasé (from the French Casser, to break). The kasé is a break from the main cycle of the rhythm into a kind of alter-ego rhythm, usually instigated by the maman drum. In some cases, all thee drums respond to the kasé with their respective changes, but often it is only the maman who will change, or at least the change in the segon is more subtle. Some kasé patterns stray quite far from the main rhythm, some create a counter pulse to it and others still remain fairly rooted in the pulse. Every rhythm has a kasé, and every kasé has its own way to enter and exit from the main line. Dancers also change their steps to follow the kasé.

“The kasé is typically played to assist with aspects of the Vodou ritual, such as pouring libations before the drums. Sometimes these are cued by the officiating priests, sometimes by the maman player himself. However, the most dramatic use of the kasé is to facilitate spiritual possession. If the maman player recognizes the physical signs at the inception of a possession of one of the servants or dancers, he will play a heated kasé to entice the loa and may keep up the intense drumming of the kasé until the chwal in question is fully possessed.

“The drums of Vodou employ techniques completely unique to the style. One of the most dramatic and difficult techniques to master is called the Siyé (from the French essuyer, to wipe). With this technique the drummer (usually a segon player) wipes the drum from the edge to the centre using the tips of his index finger, often with the thumb behind for support. As the finger rubs across the drumhead, a moaning sound is produced. The technique is employed as an embellishment on congas and is often referred to as a “Moose Call”. While the tone is very tricky to learn, it is even harder to do in the rapid succession which is required for some rhythms.” Read the entire article here: http://en.wikipedia.org/wiki/Haitian_Vodou_drumming

And here’s a set of further resources that I was graced with several years ago.