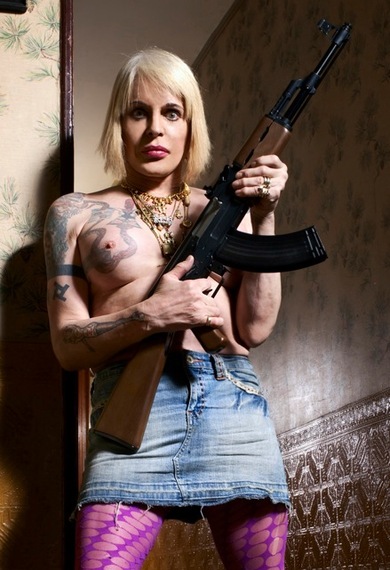 Here’s a vintage story from 2014 on Genesis Breyer-Orridge and the late, lamented Lady Jaye originally broadcast via NPR. This is a little taste:

“P-ORRIDGE: We’d been awake for three days. There were no more whites in my eyes. They were bright red. And we just finally went into the dungeon itself, and lay on the floor, pulled a sheet over me and went fast asleep amongst all these sort of weird gadgets for pulling people into the air and tying them up and so on. Hear a noise and somehow we woke up. Sat up straight, looked at the doorway, and this girl walked by with a beautiful Brian Jones blonde bob and all ’60s clothes. And she was walking backwards and forwards with a cigarette in her hand, talking to somebody. And as she carried on walking back and forth, she gradually started to throw off those close and change into a really amazing leather fetish outfit. My goodness, who is that? She’s so beautiful. We found ourselves saying out loud, dear universe, if we can be with that person for the rest of our life, that’s all we want. That’s enough. That turned out to be Lady Jaye. The person who she was talking to was another dominatrix who was saying, don’t go in the dungeon. Don’t go in there. There’s some guy in there, and he’s English, and he’s really bad news. He’s weird. A dominatrix thought we were weird? Wow. And of course, Lady Jaye’s thinking, I want to meet this person. If this person is scaring a dominatrix, they must be really interesting. So she invited me to go out that night. We went to a club called Paddles in Manhattan – some sort of underground S&M club. Jaye’s next to me, and she’s in five-inch heels, and she was five foot 10 already. So she was six foot three next to little old me, who’s 5’6.” And we happened to look down, and on the floor was this man, and one of his hands was under the heel of her high heel shoe, and she was grinding it into his hand while we chatted. That’s classy. That’s really classy. Weird, but classy. We were together from then on.”