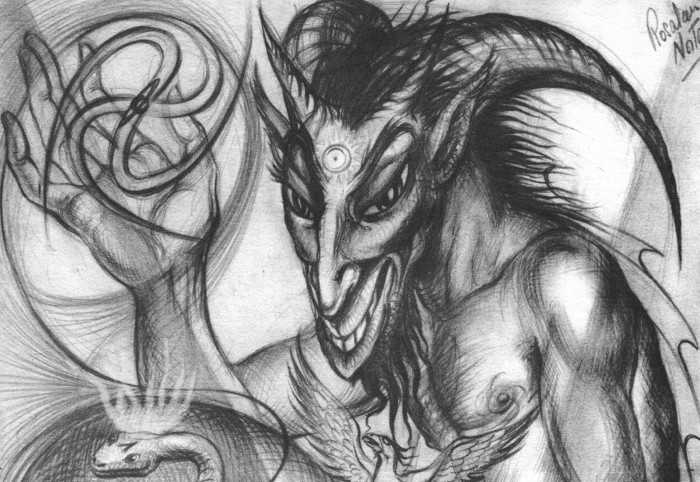 In 2000, an exhibition of Norton’s paintings was held in Kings Cross, Sydney, organised by various enthusiasts including Keith Richmond, and Barry Hale of the Australian Ordo Templi Orientis. A full-colour catalogue, The Occult Visions of Rosaleen Norton  was published to accompany this exhibition. Wiki entry

As an Australian Artist and Occultist I consider Rosaleen Norton as one of my Australia Artistic ancestors and her work stands as a true testament of a practicing Occultist who used her Art as a medium of her spiritual work. BWH

THE WITCH OF KINGS CROSS –

from the NATIONAL GEOGRAPHIC -2016

Was Rosaleen Norton a depraved Satanist or a talented artist? It depends on who you ask…

A skilled painter and follower of the pagan god Pan, for most of her life Rosaleen was known as “Roie” to her friends but The Witch Of Kings Cross to everyone else.

“The 1940s and 1950s in Australia were very morally conservative,” says Marguerite Johnson, an Associate Professor at The University of Newcastle, whose childhood interest in Rosaleen has continued into her academic career…..

….Professor Johnson’s long-held fascination led her to extensive research into Rosaleen’s occult beliefs and her representations of the magical spirits and beings that visited her during trances.

For Rosaleen, there was no “black” or “white” magic; it was a force and power above morality.  Her artwork included images of Pan, the pagan god she worshipped who is often mistaken for Satan.

When she displayed paintings at a Melbourne art gallery, the exhibition was closed down and Rosaleen was charged with obscenity, though the case was later dismissed.

To this day, she remains the only Australian artist to have her work destroyed by order of the courts.

“They thought they were rude and disgusting, but they were actually, for her, her belief system put down in art,” says Professor Johnson. “To Roie these are sacred experiences, but to the general public, they’re blasphemous.”

One police officer became particularly obsessed with Rosaleen, hounding her for the practice of sex magic with men including poet Gavin Greelees and English conductor Eugene Goossens…..