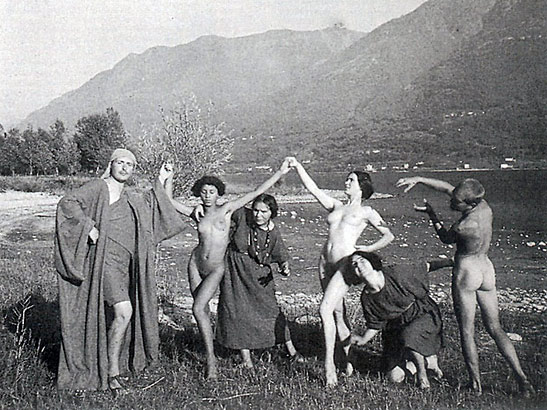 Last month, Academia Ordo Templi Orientis hosted a conference at Monte Verità in Ascona, Switzerland, mounted in cooperation with the OTO Grand Lodge of Italy. The site was chosen to honor the centennial of the O.T.O. “Anational Congress for Organizing the Reconstruction of Society on Practical Cooperative Lines,” organized by Doctor Theodor Reuss and held on August 15–25, 1917 at Monte Verità.  U.S. Grand Lodge’s website‘s history section includes a passage regarding Reuss’ original confernece at Monte Verita:

“In Ascona, Reuss held an ‘A National Congress for Organising the Reconstruction of Society on Practical Cooperative Lines’ at Monte Verità from August 15-25, 1917. This Congress included readings of Crowley’s poetry (on August 22) and a recitation of Crowley’s Gnostic Mass (on August 24 — for O.T.O. members only). The announcement for this congress stated: ‘There are two centres of the O.T.O., both in neutral countries, where enquiries can be lodged by those interested in the aim of this congress. One is at New York (U.S. of America), the other at Ascona (Italian Switzerland).’ Crowley was living in New York at the time; so, evidently, he and Reuss were the only active National Heads of O.T.O. in 1917.

“Reuss had his secretary, ‘J. Adderley’ (Isabel Adderley Oedenkoven), send a copy of the announcement, along with a copy of Crowley’s Manifesto of the M∴M∴M∴, to the United Grand Lodge of England, hoping that the Grand Lodge would send a representative. It did not; but William Hammond, the Grand Lodge Librarian, wrote to Reuss after the congress and asked for additional information. During Reuss’s correspondence with Hammond, Reuss reminded Hammond that they had met in 1913/14, and Reuss had provided him with copies of the Oriflamme and Crowley’s Equinox, which, he said, ‘give details about O.T.O.’

“Reuss was clearly impressed with Thelema. Crowley’s Gnostic Mass, which Reuss translated into German and had recited at his Anational Congress at Monte Verità, is an explicitly Thelemic ritual. In an undated letter to Crowley (received in 1917), Reuss reported excitedly that he had read The Message of the Master Therion to his group at Monte Verità, and that he was translating The Book of the Law into German. He added, ‘Let this news encourage you! We live in your Work!!!’”

Reuss’ decision to hold his conference at Ascona was likely influenced by its reputation as a hotbed of free-thought and utopianism, as detailed on the Monte Vertia website:

“In the nineteenth century and at the beginning of the twentieth, the Ticino, republic and canton since 1803, became a gateway to the south and favourite destination of a group of unconventional loners who found in the region, with its southern atmosphere, fertile ground in which to sow the seeds of the utopia they were unable to cultivate in the north. The Ticino came to represent the antithesis of the urbanised, industrialized north, a sanctuary for all kinds if idealist. From 1900 onwards Mount Monescia above Ascona became a pole of attraction for those seeking an ”alternative” life. These reformers who sought a third way between the capitalist and communist blocks, eventually found a home in the region of the north Italian lakes.

“The founders came from all directions : Henry Oedenkoven from Antwerp, the pianist Ida Hofmann from Montenegro, the artist Gusto and the ex-officer Karl Gräser from Transylvania. United by a common ideal they settled on the ‘Mount of Truth’ as they renamed Monte Monescia.

“Draped in loose flowing garnments and with long hair they worked in the gardens and fields, built spartan timber cabins and found relaxation in dancing and naked bathing, exposing their bodies to light, air, sun and water. Their diet excluded all animal foods and was based entirely on plants, vegetables and fruit. They worshipped nature, preaching its purity and interpreting it symbolically as the ultimate work of art: ‘Parsifal’s meadow,’ ‘The rock of Valkyrie’ and the ‘Harrassprung’ were symbolic names which with time were adopted even by the local population of Ascona who had initially regarded the community with suspicion.

“Their social organisation based on the co-operative system and through which they strove to achieve the emancipation of women, self-criticism, new ways of cultivating mind and spirit and the unity of body and soul , can at the best be described as a Christian-communist community. The intensity of the single ideals fused in this community was such that word of it soon spread across the whole of Europe and overseas, whilst gradually over the years the community itself became a sanatorium frequented by theosophists, reformers, anarchists, communists, social democrats, psyco-analysts, followed by literary personalities, writers, poets, artists and finally emigrants of both world wars: Raphael Friedeberg, Prince Peter Kropotkin, Erich Mühsam who declared Ascona ‘’the Republic of the Homeless”, Otto Gross who planned a ‘’School for the lib-eration of humanity”, August Bebel, Karl Kautsky, Otto Braun, even perhaps Lenin and Trotzki, Hermann Hesse, Franziska Gräfin zu Reventlow, Else Lasker-Schüler, D.H Lawrence, Rudolf von Laban, Mary Wigman, Isadora Duncan, Hugo Ball, Hans Arp, Hans Richter, Marianne von Werefkin, Alexej von Jawlensky, Arthur Segal, El Lissitzky and many others.”