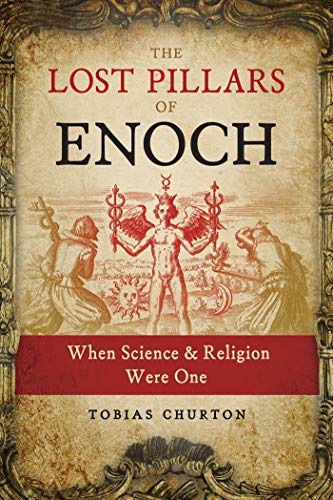 Wow. I dunno how I missed this book by noted occult author Tobias Churton, who’s penned a series of books on various periods in the life of the Prophet of the Lovely Star: The Lost Pillars of Enoch: When Science and Religion Were One. But the hardback came out last December and the paperback, earlier this year. The publisher’s description says:

Esoteric tradition has long maintained that at the dawn of human civilization there existed a unified science-religion, a spiritual grasp of the universe and our place in it. The biblical Enoch–also known as Hermes Trismegistus, Thoth, or Idris–was seen as the guardian of this sacred knowledge, which was inscribed on pillars known as Enoch’s or Seth’s pillars.

Examining the idea of the lost pillars of pure knowledge, the sacred science behind Hermetic philosophy, Tobias Churton investigates the controversial Jewish and Egyptian origins of Josephus’s famous story that Seth’s descendants inscribed knowledge on two pillars to save it from global catastrophe. He traces the fragments of this sacred knowledge as it descended through the ages into initiated circles, influencing civilization through Hermetic, Gnostic, Kabbalistic, Masonic, Hindu, and Islamic mystical knowledge. He follows the path of the pillars’ fragments through Egyptian alchemy and the Gnostic Sethites, the Kabbalah, and medieval mystic Ramon Llull. He explores the arrival of the Hermetic manuscripts in Renaissance Florence, the philosophy of Copernicus, Pico della Mirandola, Giordano Bruno, and the origins of Freemasonry, including the “revival” of Enoch in Masonry’s Scottish Rite. He reveals the centrality of primal knowledge to Isaac Newton, William Stukeley, John Dee, and William Blake, resurfacing as the tradition of Martinism, Theosophy, and Thelema. Churton also unravels what Josephus meant when he asserted one Sethite pillar still stood in the “Seiriadic” land: land of Sirius worshippers.

Showing how the lost pillars stand as a twenty-first century symbol for reattaining our heritage, Churton ultimately reveals how the esoteric strands of all religions unite in a gnosis that could offer a basis for reuniting religion and science.