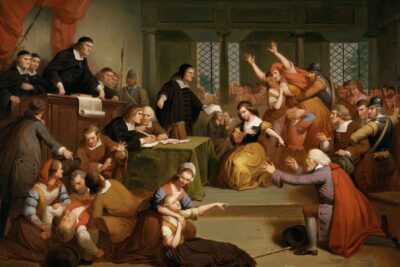 The Peabody Essex Museum in Salem, Massachusetts is hosting an exhibit of artefacts connected with the infamous Salem Witch Trials of the late 17th century. At a time when the QAnon cult is coming after Ordo Templi Orientis based on their self-delusions that we are a group of Satanic baby killers, I thought it might be useful to contemplate passed episodes of magico-religious persecution.

The Museum’s site has posted:

“The Salem witch trials threatened the very core of the early Massachusetts Bay Colony. The extraordinary hysteria involved more than 400 people and led to the deaths of 25 innocents — men, women and children — between June 1692 and March 1693. Explore rarely-exhibited original witch trial documents from PEM’s Phillips Library collection and learn the true story of this tragedy as told through the voices and with the possessions of those directly involved.

“Many unfounded theories about the Salem witch trials, from poisoning by rotten bread to property disputes to an outbreak of encephalitis, still persist to this day. The panic grew from a society threatened by nearby war and a malfunctioning judicial system in a setting rife with religious conflict and blatant intolerance. For more than 300 years since, the complex drama of the witch trials and its themes of injustice and the frailties of human nature has fascinated us.”

And let us not forget that 25 innocent women, men and, yes BABIES were killed by maniacal prosecuting forces that drove the Salem Witch Trials.