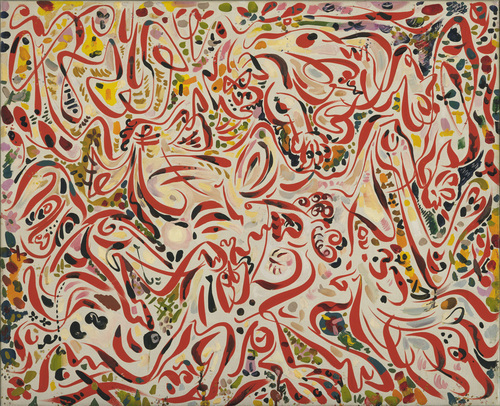 Rossignol, detail of Wisdom, Harmony, Unity, Omnipresent God 1920-33, No 30 of the Goodly Company series of psychic drawings, watercolour and gouache on paper, 72 x 53 cm
Collection of the College of Psychic Studies, London

‘Art is usually made by the ‘hand of the artist’, but for centuries artists, from William Blake and Georgiana Houghton to Matt Mullican, have been ‘guided’ by forces beyond their control’
Marco Pasi writes for the latest edition of  Tate Etc.[ issue 37: Summer 2016 -20 June 2016 ]
Which examines ‘artist who made works guided by those in the spirit world.’ Following on from the exhibitions of Spiritualist Artist Georgiana Houghton in Australia and London and Hilma af Klint, at the Serpentine Galleries it seems as if the art world is fascinated with the collusion between Art and the Spirit World.  BWH
two exerts to this fascinating article below.

….’seemingly strange situation of creating a work without having the perception of being its author. In this case, being dispossessed of agency and authorship becomes not an obstacle, but a condition for creation.

The intuitive idea most people have of artistic creation is that artists are able to turn their fantasies and ideas into concrete, perceptible objects by following a more or less elaborate technical process. Whether the artistic establishment will recognise the value of these objects is of course another matter. This is a very rational way of looking at the whole process, a perspective that has been largely predominant in the history of modern art. After all, acknowledging that a particular person is the ultimate ‘author’ of a work implies such a linear view of artistic creation. But the history of Western culture (not to mention those of other cultures) is full of moments in which this simple paradigm has been challenged, whether metaphorically or literally.’…… ……’The creative techniques of automatism, based on spirit communication, were formalised by 19th-century spiritualism. Their use did not ensure artistic quality, but they could at least facilitate radical experimentation and innovation. This potential was seen and interpreted positively by early psychologists of the unconscious, such as Frederic WH Myers and Théodore Flournoy. It was the subliminal self that was speaking through the artist, not the spirits, and could express itself in ways that could lead to the development of real artistic genius. The same potential was perceived by the surrealists, who, as in the case of André Masson, were keen to experiment with automatic drawing and other similar techniques. The belief in the spirits had vanished; the new interpretive framework was now wholly secular and based on the insights of psychoanalysis, but the basic techniques were adopted from spiritualism.’…….
Read Marco Pasi’s article in Tate Etc. issue 37 : Summer 2016 here: The Hidden Hand
Tate Etc. issue 37: Summer 2016