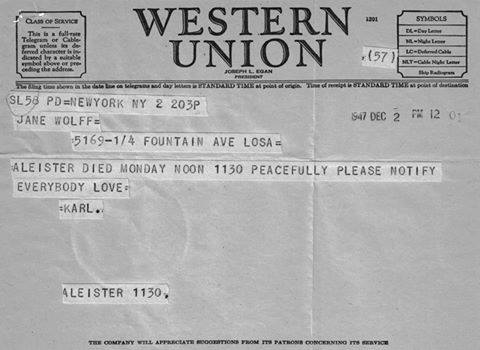 “On 1 December 1947, Crowley died at Netherwood of chronic bronchitis aggravated by pleurisy and myocardial degeneration, aged 72.[214] His funeral was held at a Brighton crematorium on 5 December; about a dozen people attended, and Louis Wilkinson read excerpts from the Gnostic Mass, The Book of the Law, and “Hymn to Pan”. The funeral generated press controversy, and was labelled a Black Mass by the tabloids. Crowley’s ashes were sent to Karl Germer in the US, who buried them in his garden in Hampton, New Jersey. – Wikipedia