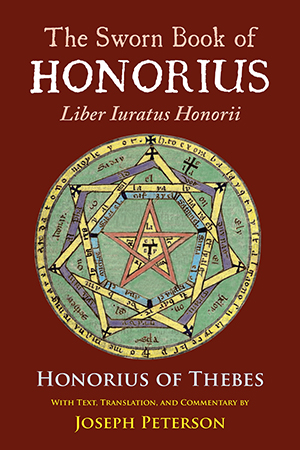 Released under the Ibis Press and Nicholas Hayes imprint, a newly translated edition of The Sworn Book of Honorius (Liber Iuratus Honorii) is being released in May, 2016. Translated from the Latin by well-known esoteric scholar and curator of the Esoteric Archives, Joseph Peterson, this will be an exceptional addition of the corpus of occult literature in the English language. At current, beyond the manuscripts themselves, Gosta Hedegard’s critical edition of the Latin of this work has been as close as one could come to accessibility to what was a highly influential text in the dawn of Western Occultism.

Pulling from multiple sources, Peterson has again sought to provide us with a critical edition in English, an aim I am doubtless he has accomplished. For Enochian enthusiasts, it will be recognized that this work contains the earliest variant detailing the construction of the Sigillum Dei Ameth, though its original form and intent is significantly different from the pattern adopted by John Dee.

More on the The Sworn Book of Honorius can be found at the Ibis Press website.

I greatly look forward to its release!