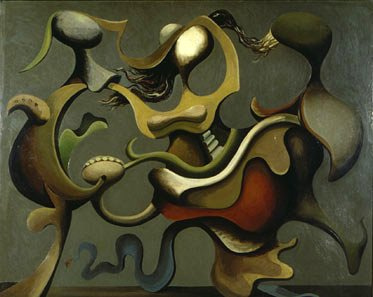 Many would acknowledge the connection between the magician and the artist. In Magick Without Tears Aleister Crowley suggested that artists engage in gnostic experience during their acts of creati0n: “…all true Art is spontaneous, is genius, is utterly beyond all conscious knowledge or control…” He also defined magick as:the Science and Art of causing Change to occur in conformity with Will.” And when is such change more marvelous than when the artist manifests beauty, passion, horror or enlightenment in paint on canvas, sculpture, moving pictures or music, summoned up from the imagination – literally making something out of nothing.  There have, in fact,  been artists who acknowledge or actually practice thaumaturgy including the likes of filmmaker Kenneth Anger, comic book creators Alan Moore and Grant Morrison more recently. Past cross-practitioners would include painter/avant-garde film pioneer Harry Smith (a Bishop of the Ecclesia Gnostica Catholica) as well as… surrealist painter Kurt Seligmann.

According to Wikipedia: “Kurt Leopold Seligmann (1900–1962) was a Swiss-American Surrealist painter and engraver. He was known for his fantastic imagery of medieval troubadors and knights engaged in macabre rituals and inspired partially by the carnival held annually in his native Basel, Switzerland…At the outbreak of World War II in September 1939, Seligmann was the first European Surrealist to arrive in New York, ostensibly for an exhibition of his work being held at the Karl Nierendorf Gallery…Seligmann’s art continued to evolve and reached maturity during the 1940s in the United States, where he did his best work. .As the Surrealists’ expert on magic, he also wrote a history of it, The Mirror of Magic (Pantheon Books, 1948 – currently available under the title The History of Magic – http://www.amazon.com/History-Magic-KURT-SELIGMANN/dp/0965084639/ref=sr_1_1?ie=UTF8&qid=1423756943&sr=8-1&keywords=kurt+seligman+the+history+of+magic ). Mythology and esoterica always infused the fascinating and turbulent imagery of his ‘dance macabre’ paintings…” [read the entire piece here: http://en.wikipedia.org/wiki/Kurt_Seligmann]

There are many individuals, including artists that make use of occult imagery without being actual practitioners but when questioned by our OHO as to the seriousness of Seligman’s magical work, Harry Smith replied, “It was big business — but nobody talked about it.”