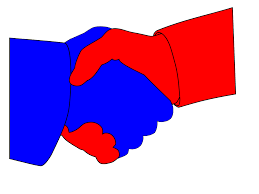 The last few weeks have been mildly dramatic in my sphere of experiences. I’m one of those naive optimists that think if people with different opinions sit down and talk to each other, one on one, or in a forum that’s properly moderated, that we can reach a consensus and mutual understanding. If mutual understanding isn’t possible, then I think we can at least reach a point where we can agree to disagree, and continue the Work within the local, national, and international OTO bodies.

I’m friends with people far and moderately left, like myself, and people who are far and moderately right on the political spectrum. I argue vehemently for my political and social agenda (I actually have one that I’ve thought out and am implementing in every way I can think of). I have strong opinions about the organizations Aleister Crowley left in place relative to Thelema, and I have my own opinions about how these organizations need to express themselves publicly to accomplish the goal of promulgating the simple fact that Do what thou wilt shall be the whole of the Law.

But I don’t think I’m necessarily perfect in my understanding or expression of what that all means, any more than anyone else is. I firmly believe we are each and every one of us trying to figure that out. I see the OTO as a Great Experiment, bringing together people who may or may not agree on the principles of Magick, Philosophy, Science, and how all that relates to each individual. We’re doing a thing that is hard, and will cause conflict.

But we are doing it on the basic principle of mutual respect. Every man and every woman is a Star. That’s the core principle that guides our experiment, in my opinion. Whether we agree or disagree, the fundamental foundation is complete respect for the autonomy and ultimate accomplishment of the Great Work, the Summum Bonum, true wisdom, and perfect happiness. We recognize that everyone else doing this thing is at whatever stage they are in, selves included, and that we haven’t finished yet.

Brother James Wasserman has been the center of focus within some groups lately because his opinions on things are controversial. I have a lot of feelings about him, both positive and negative. I agree with him a lot, on some things magickal, and disagree with him a lot on … just about everything else. He’s aware of this, we talk relatively frequently. Congenially. Fraternally. As if we were brothers, or something.

Our mom would have to have had us about 20 or 30 years apart or so, but still. LIKE brothers.

So when things got all swirly around him, I asked him if he’d do an interview with me. He agreed, I sent him the questions, and we started hashing things out so we could present a public discourse on subjects that we fundamentally disagreed about, but in a fraternal way. Because we are all working towards the same end game, the illumination of all and the accomplishment of the Work.

The further we got into the details, the more it became apparent that we couldn’t actually have that conversation publicly*. Our perspectives on things are … controversial. None of the topics I wanted to discuss would have brought healing at this point in our shared community. The current trend of  polemics has made public discussion of controversial topics verboten. We can’t even get drunk and argue about things without it causing layers of consternation on all “sides.”

Sides. Friggin’ sides. My side, your side. Democrats, Republicans. Independents on the left and right. Thelemites are strongly independent, but we still fall on social spectra.

That’s all well and good, but we can’t demonize our brothers and sisters because we don’t agree on things. There is a common shared thing that we are doing together that is greater than whatever interpersonal and political things we share or butt heads about. We aren’t in this Thelema thing to prove a point. To show “we” are right, and “they” are wrong. We’re doing this for the greater good of all. When we threw in our lot with this particular experiment, part of the agreement is recognizing that “Do what thou wilt” applies to everyone. A star wants to be a commie anti-fa insurrectionist? That is their right. A star wants to be a right-wing conservative who thinks Obama’s immigration stance was harmful to the well-being of the United States of America? That is their right.

Even if I think they are wrong.

Thelemites’ first activist reaction to any situation (IMO) should first and foremost be towards defense of the Law. It is for all. The world is a complicated place, with lots of perspectives and interpretations. People are at different places in their paths, people have had different experiences, people are not all the same. We don’t all agree all the time.

But we have agreed, within the O.T.O. to respect one another. To afford the rights of all human beings to one another. Every time I get my undies in a bunch over what another sister or brother thinks or says publicly, I’m moving my attention from our shared goals and progress to the things I think matter more than the core concepts that drew us together in the first place.

But we aren’t perfect, none of us. Left or Right, commie or capitalist tool. We have got to get over this stuff if we’re going to make it all work.

The O.T.O. is a body that takes a person through initiations leading from Birth, to Life, to Death. We are here to provide every free woman and man access to the mysteries of our Order, so that they can experience it, and do what they will with it. That’s our common cause.

That means getting over the crap that floats to the surface as we apply the heat of transformation to the prima materia. Giving people room to be who they are. Offering corrective advice when we think it’s necessary, but at the same time defending to the last person standing their right to do what they will.

The Law is for All.

* Although we couldn’t have the conversation publicly, we did have a private conversation about all those controversial topics, and walked away with a better mutual understanding and respect for each others’ perspectives on things.