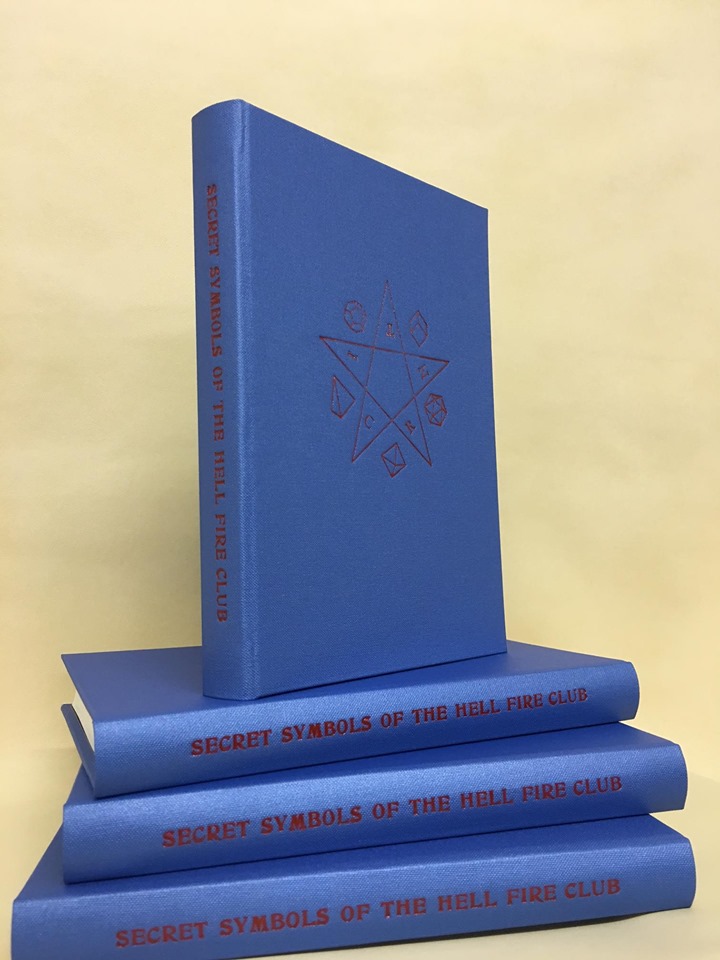 “This is an occult classic that opens a window to scholars wishing to delve deeply into its extraordinary spiritual and occult world.

“This edition is limited to 500 copies clothbound, hand numbered and signed by the author

“Each incorporates 258 pages and over 140 colour and black and white illustrations with many being seen here for the first time.

“Here you will find first-hand information on the structure and meetings of the Hell Fire Club, the magical-alchemical and neo-pagan symbolism of its customs and architecture, and a disclosure for the first time of the technology of self-discovery which lies at the heart of traditional Thelema.

“Today the Hell Fire Club remains a society of equals, its members are both men and women of all ages, all are free to assay the journey of the soul and all convene in a sacrament of freedom honoring alike the sacred within us all.

“Rare information on the 1940’s ‘Phoenix Nest’ group which met at West Wycombe influencing the thought of occult researchers including Aleister Crowley, Gerald Gardner, Robert Cochrane, Evan John Jones and members up to the present day.

“All is complete with ten detailed appendices and two select bibliographies

“..The fragments of the Hell Fire Club’s inner teachings that are gathered here have come from all surviving streams, the names of the guardians of these truths are all but lost, only a strange heraldry remains: signs of Heart, Eye, Lamp and Anchor flaming vividly through the dark….”

“Originally published and circulated in private among members as a series of ‘Chapter Papers’, the material in this book vividly describes the inner world of one of the most famous (some say infamous) societies in history.

“The Hell Fire Club… It’s a group that elicits responses ranging from horror to fascination to macabre obsession. It smacks of secret society rites, mysteries revealed and revelled in; yet the sensationalist image of the Hell Fire Club quickly pales in comparison to the description of the oral tradition and the modern, continuing and resurrected tradition it has become in the hands of seekers wishing to preserve the teachings and symbols of the Club and who have at their hearts the desire for self-knowledge and truth. “Secret Symbols of the Hell Fire Club” takes the reader on a journey into the darkness of the infamous caves in which the secrets were originally given, and illuminates for those who wish to see the deeper meaning of the Mystery of Life within the sanctuary of their own soul.

“The book examines the use of two symbolic ‘Keys’ which unlock Dashwood’s notorious 18th century caves in surprising ways, shows the whereabouts of the legendary ‘secret passage’ in the caves and discloses the precise magical nature of the mysterious Rosicrucian lamps which lighted the passages and secret temples within. The book relates the symbolism and activities of the Club to magickal evolution and indicates the possible existence of both Orphic mystery cult and survivals of Etruscan witch cult within the Club as well as elements of Templar cosmology in the Hell Fire Caves.

“Sir Francis Dashwood founded his Hell Fire Club in the middle of the 18th century and clandestine meetings were held variously at his house in West Wycombe, the caves dug under the church and at his second property Medmenham Abbey, originally a Cistercian house on the Thames built by the Templar Hugh de Bolbec in the 12th century.

“Drawing its membership from the aristocracy, society ladies and satirical poets of the day, political hustlers, painters, scholars and revolutionaries, The Hell Fire Club still fascinates and summons the souls of spiritual seekers to tread the paths up to the church at West Wycombe and down again into the darkness of Sir Francis Dashwoods underground temple…

“Local legends abound as to the goings on in these caves, tales of ghosts, devils and secret passages have run like veins of gold through previous publications yet without their authors guessing the true nature of the secret nor its importance for humanity.

“Whilst the essential connection between Dashwoods invoking ‘Do What Thou Wilt’ and the Rabelasian ‘Fay ce que vouldras’ has been noted over the last two centuries no-one has divined that the complex cave system dug at West Wycombe in the middle of the 18th century in fact largely follows the plan of a mythical cave system described in Rabelais Book 5 (‘Gargantua and Pantagruel’ 1532), and that the immense six-sided mausoleum atop the hill at West Wycombe is a reflection of the six-sided Abbey of Theleme as first described in Rabelais, the measurements of which are Kabbalistic ciphers for parts of the Tree of Life.

“Taking the labyrinthine caves together with the Mausoleum, the unusual church at West Wycombe, the symbolism of the House and the temples situated its gardens, Medmenham Abbey, and the large store of local oral legend the author weaves together an initiatory journey that may be taken either alone or in the company of others.

“The text is remarkable in that it seeks to display not merely a history that is previously unknown, but a high philosophical, mystical and magickally potent interpretation of this extraordinary society which left its mark both architecturally in the immediate landscape and politically in the challenging of injustice, culturally in the promoting of liberty and spiritually in the establishment of a vision of unity.

“Unique to this work is the inclusion of material gathered from local folklore, much of which had previously remained secret among families of local craftsmen and farm workers in Buckinghamshire, and the publishing of esoteric material relating to the painter and mystical occultist Maxwell Ashby Armfield (died 1972) whose articles on occultism and whose letters to Dion Fortune and Aleister Crowley survive, and his wife Constance Smedley who lived at West Wycombe in the 1940’s and whose activities influenced the secretive ‘Phoenix Nest’ group part of which survived up until the end of the last century.

“Extraordinary to many will be the discovery that ‘Thelema’ as a precursor to the occult system of Aleister Crowley was not merely a historical curiosity, but a vibrant intellectual and social force swelling up from the humanists of Italy and France, through to the Enlightenment.
This antique Thelema had a character quite distinct from that proposed by Crowley, it was an incredibly subtle and beautiful thread which connected all mankind no matter what their nature and this thread continues today

“The essential motto of the Hell Fire Club: ‘Sacred to Liberty & Friendship’, and its corollary ‘Dare O Guest to set Wealth at Naught’, speak of a society that honours love, sets all free and discards the trappings of wealth that divide us. The Club was founded by one of the foremost members of the English aristocracy but found many common men and women amongst its members. Today the club survived precisely because common men maintained it, twenty years ago the oral legends were passed on from friend to friend over a glass of wine in one or two of the local taverns or in the upper room of a small cottage in West Wycombe, and without that would surely have disappeared from history.

“Building on that store of local legend, gathering the symbols together from the various families and individuals who safeguarded them.

“Contents of the Book:

Chapter 2 : On the Physical Appearance of the Chapter Room

Chapter 3 : On the Lamp in the Great Chamber its origins & symbolism

Chapter 5 : On the Four Degrees

Chapter 6 : On Alchemy in the Chapter

Chapter 7 : On the Stewards Office, their Dress & Jewel: being the First Key Considered

Chapter 8 : The Second Key, or the Silver Star of the Priory of St.Francis: its application and meaning

Chapter 10 : On the Mystery of the Abbott & the Ship of Fools

Chapter 11 : The Passing of the Sun

Chapter 12 : On the Inner Temple Lamp & the Small Temples Considered