“The Satanic Temple has asked to fly its flag over Boston City Hall after the U.S. Supreme Court this week ruled that the city violated a Christian group’s constitutional free speech rights by refusing to raise a flag bearing the image of a cross.

“The Salem, Massachusetts-based Satanic Temple following the ruling posted a request filed on Tuesday with the city’s property department asking to have its flag raised for “Satanic Appreciation Week” from July 23 to 29.

“The city had operated a program that let private groups use the flagpole while holding events in the plaza below. It suspended the program last October amid the litigation to ensure that the city could not be compelled to “publicize messages antithetical to its own” and has said it is re-evaluating the program.

“Asked about the Satanic Temple’s request, a spokesperson for Mayor Michelle Wu’s office noted the program’s suspension and said the city was reviewing the high court’s Monday decision.”

I didn’t even know they had a friggin’ flag! Colour me impressed. 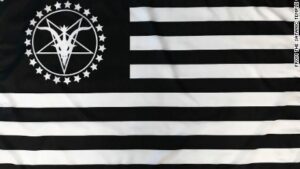