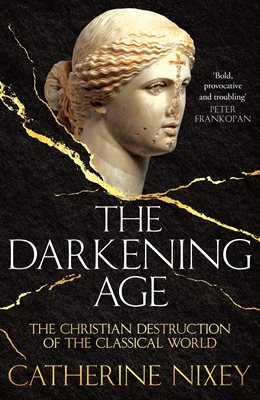 Thomas Hodgkinson recently reviewed Catherine Nixey’s The Darkening Age: The Christian Destruction of the Classical World , for the London Spectator. The book is a look at the transition from the Classical world to Christendom and quite a harrowing one! The publisher’s site states:

“The Darkening Age is the largely unknown story of how a militant religion deliberately attacked and suppressed the teachings of the Classical world, ushering in centuries of unquestioning adherence to ‘one true faith’.

“Despite the long-held notion that the early Christians were meek and mild, going to their martyr’s deaths singing hymns of love and praise, the truth, as Catherine Nixey reveals, is very different. Far from being meek and mild, they were violent, ruthless and fundamentally intolerant. Unlike the polytheistic world, in which the addition of one new religion made no fundamental difference to the old ones, this new ideology stated not only that it was the way, the truth and the light but that, by extension, every single other way was wrong and had to be destroyed. From the 1st century to the 6th, those who didn’t fall into step with its beliefs were pursued in every possible way: social, legal, financial and physical. Their altars were upturned and their temples demolished, their statues hacked to pieces and their priests killed. It was an annihilation.”

Meanwhile an excerpt from the review notes:

“As its title suggests, Nixey’s book presents the progress of Christianity as a triumph only in the military sense of a victory parade. Culturally, it was genocide: a kind of anti-Enlightenment, a darkening, during which, while annihilating the old religions, the rampaging evangelists carried out ‘the largest destruction of art that human history had ever seen’. This certainly isn’t the history we were taught in Sunday school. Readers raised in the milky Anglican tradition will be surprised to learn of the savagery of the early saints and their sledgehammer-swinging followers.

“Here are some darkening dates: 312, the Emperor Constantine converts, after Christianity helps him defeat his enemies; 330, Christians begin desecrating pagan temples; 385, Christians sack the temple of Athena at Palmyra, decapitating the goddess’s statue; 392, Bishop Theophilus destroys the temple of Serapis in Alexandria; 415, the Greek mathematician Hypatia is murdered by Christians; 529, the Emperor Justinian bans non-Christians from teaching; 529, the Academy in Athens closes its doors, concluding a 900-year philosophical tradition.

“This gives some idea of the merit and remit of Nixey’s book. Also its demerit. What should be presented as conjecture is styled as fact. And when conjecture is admitted, the reasons for uncertainty aren’t given or gone into.”

I will point out that a lot of this is old news to occultists and Pagans who are well acquainted with the horrendous persecutions that Christians visited on non-Christians, apparently not having come to prefer mercy and tolerance after the centuries of persecution they had suffered at the hands of non-Christians previously. Or read much of the sayings of the Nazarene.