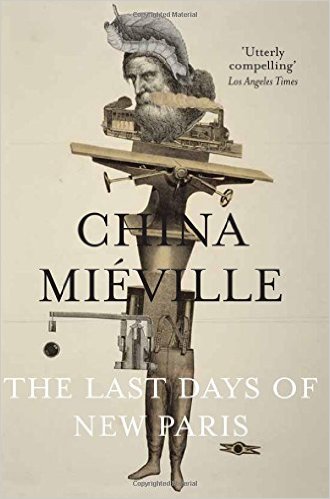 China Miéville’s The Last Days of New Paris is a weird and wild alternative history set in a 1950 Paris where the Nazi occupation is ongoing, and an incident known as the S-Blast has transformed surrealist art and poetry into golem-like life forms called manifs (manifestations). Consequently, this new Paris is a place where demons are reluctantly trapped, and reality bends to dream logic and surreal imagination.

It is the tale of Thibaut, member of the anti-Fascist surrealist guerillas known as Main à plume,  who resist the Nazi occupation using improvised weapons augmented by their unbridled fantasies. (Imagine bullet-time from The Matrix on acid.) His struggle takes on new dimensions when he encounters two unlikely allies: an American documentary photographer and a monstrous manif of an exquisite corpse.

The Last Days of New Paris involves the surrealists’ interest not only in politics, but also the occult. The book opens with a dramatic and violent encounter between the SS and the avatar of I am an Amateur of Velocipedes, a pen-and-ink sketch by occult-inspired artist Leonora Carrington. (See the piece online at the Tate Gallery website.) Alternating chapters relate the (mis)adventures of a young alternate-reality version of Thelemite rocket scientist Jack Parsons, whose visit to Paris in 1941 precipitates the S-Blast. Aleister Crowley, O.T.O., Ithell Colquhoun, Kurt Seligmann, Grillot de Givry, and others likewise get name-dropped. Thelemite Jack Parsons, who in our reality knew a thing or two about rockets, bombs and explosives, plays a pivotal role in China Miéville’s The Last Days of New Paris.

This novella is quick and enjoyable, with enough mystery and twists to keep the pages turning. Its only downside is that surreal paintings and exquisite corpses, by their very nature, can be difficult for an author to describe or a reader to imagine. The narrative presupposes, or at least benefits from, familiarity with surrealism and magick. Indeed, those familiar with these topics will enjoy the many Easter eggs and references in this book. But you need not be an expert in art or the occult to get caught up in Miéville’s latest.

From left to right: Covers for the Del Rey, Subterranean Press, and Picador editions of The Last Days of New Paris.

Published in the US in August 2016, The Last Days of New Paris releases this week in the UK. It also just came out as a signed, illustrated limited edition from Subterranean Press: this limited edition is already sold out, but copies can be found on the secondhand market. Hardcover, paperback or ebook copies can be ordered through Penguin Random House, or Picador in the UK.