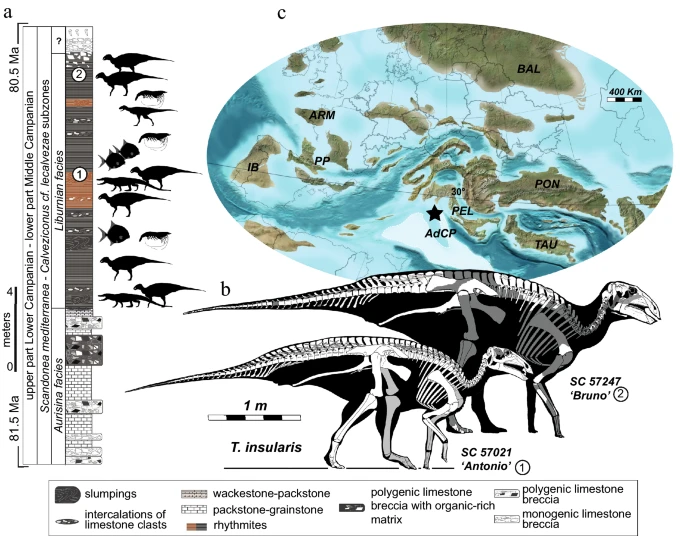 Outlets around the world are reporting on the discovery of a herd of dinosaurs in Italy, drawing on the scholarly paper published in the journal Nature. The Nature paper’s Introduction begins:

The latest Cretaceous Mediterranean archipelago, a complex set of carbonate platforms, peninsulas, and islands in the western margin of the Tethys Ocean, bracketed by Laurasian and Gondwanan continental remains of Pangea, represents a long-lasting challenge for palaeogeographers and palaeontologists focused on non-marine vertebrates, their evolution and biogeography1. Most of vertebrate remains documenting the evolution of this unique context are confined to the Adriatic Carbonatic Platforms (AdCP), a vast domain characterized by carbonate platforms severed by deeper marine areas.

The AdCP was ecologically set apart from other neighbouring larger European landmasses (i.e. Iberian, Pyrenean-Provencal, Pontid, and Pelagonian domains), where more continental environments and faunas developed, playing a pivotal role in biogeographic reconstructions for the latest Cretaceous2,3. The gradual reduction of the AdCP through compressive tectonic events from the late Campanian arguably limited dispersal events across the palaeo-Mediterranean and may have fostered the sustained miniaturisation1 in response to adaptive changes in several lineages, including non-avian dinosaurs2.

To this date, the geodynamic evolution, ecological diversity, connections with adjacent landmasses, and faunal composition of the AdCP stand as one of the most complex and debated topics related to the Tethyan evolution. Fundamental limitations in our understanding of evolutionary and biogeographic patterns are represented by (1) limited palaeogeographic data documenting the real geographic extent of carbonate platforms and their connection with other landmasses (e.g. Iberian-Provencal, Pelagonian and Balkan landmasses) and (2) rare fossil material commonly represented by ichnosites or poorly preserved skeletal remains4. Relevant to this study, available palaeogeographic maps of the AdCP during the Cretaceous suggest that purported ‘islands’ were actually vast—although intermittently emerged—areas that throughout the Late Cretaceous allowed subaerial connection between the central Mediterranean and Laurasia4,5. Therefore, terms as ‘isolated landmasses’ or ‘island’ should be used cautiously in the case of the Villaggio del Pescatore locality (VdP herein; Fig. 1) and other AdCP sites to avoid a potential misinterpretation of the regional biogeographic relevance of its fossil fauna6.

In this context, Italy plays a key role due to its geographical position and by preserving the sole latest Cretaceous dinosaur-dominated site in the AdCP system, namely the VdP (Fig. 1). This site was discovered about thirty years ago in the Upper Cretaceous–Palaeogene beds exposed near Duino Aurisina, Trieste, north-eastern Italy and produced, amongst fish, crustaceans, and plant remains, an exquisitely preserved articulated skeleton of the hadrosauroid Tethyshadros insularis7. Its complex geological setting has been addressed in several works8,9,10,11,12 but a contrasting variety of claims regarding the age of these deposits (late Santonian8,13,14,15,16,17; Santonian–Campanian11,12; late Campanian–early Maastrichtian7,18) has created controversy that directly impacts biogeographic contextualization and evolutionary interpretations19 (e.g. VdP as part of a Maastrichtian archipelago fostering insular adaptations2). Additionally, from a faunal perspective, the combination of purportedly ‘derived’ and ‘primitive’ characters occurring in the holotype of T. insularis (SC 57021)7,20, its diminutive size (~ 338 kg according to body-size regression estimates presented by Benson et al.21), and its suggested maturity, were used as evidence of insular dwarfism in this taxon.

An early Maastrichtian age for the VdP site combined with phylogenetic analysis that placed Tethyshadros closely related to the supposedly coeval and island-dwarf Telmatosaurus from the ‘Transylvanian island’ of Romania2, set the ground for hypotheses regarding the evolution of a clade of dinosaurian insular dwarves in the latest Cretaceous7,22. Novel geological and fossil data from the VdP presented here finally represent the first set of evidence to test such hypotheses and provide insights into claimed insular adaptations and body size evolution in the latest Cretaceous dinosaur fauna of Europe. 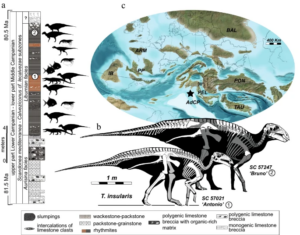