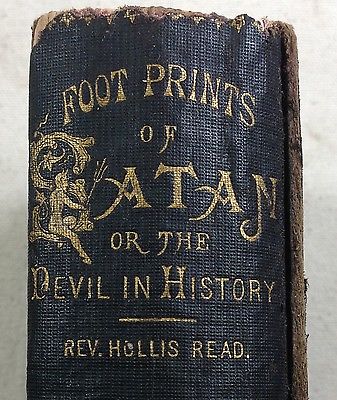 Bear with me on this… a case has been made for the “God of the OTO” being Satan, citing statements the Prophet Of the Lovely Star made in notes collected in The Magical Record of the Beast 666 among other places. I leave you to have a look yourself and make your own decisions about the value of such arguments (of course Crowley indicates that the formal figures of all Deities and anti-Deities are best taken as glyphs as well so… wuddev). Meanwhile the 19th century book “Foot Prints of Satan or The Devil in History” by the Reverend Hollis Read goes to great length to prove that the institution most directly contrived by and sustained by The Adversary is “Romanism,” “Popery,” etc. better known latterly as the Roman Catholic Church. Contents include:

I The Devil The God of This World (anyone ever intone “Adonai Ha’Aretz” out there? Anyone have a Tarot deck with the “The Lord of This World” card? Ya ever wonder who “the Lord” mentioned repeatedly in the Gnostic Mass might be?)

and so… I dunno. Intriguing overlaps, perhaps?

And while there are no contemporary documentaries circulating on Shaitan, there IS one by noted director Wim Wenders on his right hand man (according to some Protestants over a number of centuries) the current Pope, Francis: Pope Francis: A Man of His Word. In a recent New Yorker piece it’s opined:

“In his five years as Pope, Bergoglio has made certain ideas the basis for his work. The best known is mercy: the church, he said, in a definitive September, 2013, interview with the Jesuit priest Antonio Spadaro, should be like ‘a field hospital after battle,’ a place to care for others without making distinctions based on faith or lack of faith. ‘It is useless to ask a seriously injured person if he has high cholesterol, or about the level of his blood sugars. You have to heal his wounds. Then we can talk about everything else.’ In the same moment, he set out another crucial idea. The church, he said, ‘needs to warm the hearts of the faithful . . . it needs nearness, proximity.’ The Church, especially the clergy, should be among the people—most importantly the poor—seeing their lives and challenges near at hand. Friends and family should be in proximity to each other, through time spent together: meals, conversations, affection, tenderness. All this is framed by the conviction that the central Christian mystery—God becoming man, the father sending his son—is about the divine effort to draw nearer to humanity, and vice versa.”

I throw all this out there as an intellectual exercise – a chance to get outta yr box. No particular agenda here. Just funny how certain ideas swirl around particular points.