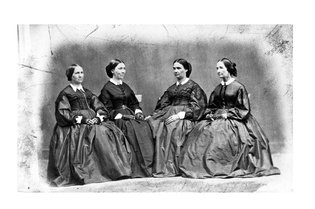 In Liber LXXVII aka “Oz,” the Prophet of the Lovely Star proclaimed:

“Man has the right to love as he will,

when, where and whom he will.”

Meanwhile, the Thelemic community residing within Ordo Templi Orientis tend to accept all manner of romantic and sexual relationships between consenting adults including those involving multiple partners. These attitudes have notable roots in the utopian movements that thrived in the United States in the 19th century and could view the Church of Latter Day Saints as emerging from that socio-religious matrix. Indeed, one of their distinguishing tenets was that of plural marriage though this exclusively meant men “sealing” themselves to multiple wives and never vice versa. But polygamy was not originally a part of church doctrine and eventually it was formally denied by church hierarchy.

The New York Times Book Review published a review of A House Full Of Females by Pulitzer prize winner, Laurel Ulrich, a practicing Mormon and  Harvard history professor. The book provides a nuanced views of a range of women’s reaction to the introduction of this doctrine, its subsequent practice and then its cessation providing some thought provoking revelations:

“…the book also tells a more complicated tale about women’s on-the-ground experiences. While some women objected to plural marriage, Ulrich notes, others sought it out as a means of securing economic stability or of escaping from abusive marriages. Still others came to embrace plural marriage as a form of communitarianism, in which women shared domestic burdens and labor. Ulrich describes friendships and rivalries between wives (themes that will be familiar to any viewer of HBO’s ‘Big Love’). She even makes a case for plural marriage as a vehicle for a form of feminist consciousness-raising. Although outsiders referred to Brigham Young’s home as his ‘harem,’ Ulrich writes, ‘it could also have been described as an experiment in cooperative housekeeping and an incubator of female activism.’

“As evidence for this budding political sensibility, she points to the little-known fact that the territory of Utah granted women the right to vote in 1870, a full half-century before the federal constitutional amendment. Unlike Wyoming, the first to approve woman suffrage, Utah was already majority-female at that point, and many of those Mormon women supported both suffrage and plural marriage.” Read the entire review here: