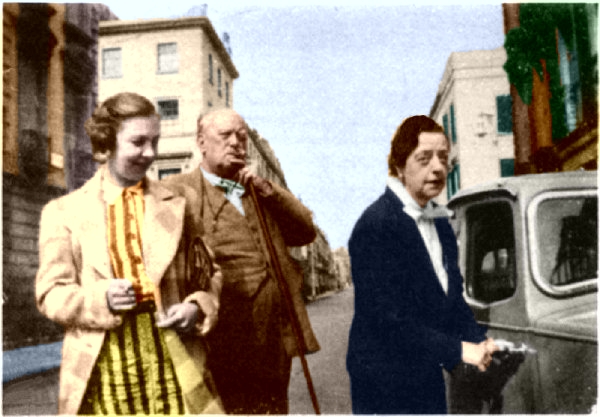 Frieda Lady Harris (1877–1962) is best known as the artist executant of the Thoth Tarot. She was the one who suggested to Aleister Crowley that they work on creating a Tarot deck to his specifications, and she provided him with a stipend for the instruction that she would require to realize his vision. What they originally estimated as a rote six-month project expanded into a radical revisioning of the Tarot, along with an accompanying book. Created in the last decade Crowley’s life—and thus informed by four decades of study and practice—the deck and book represent the Master Therion’s most mature, complex, and comprehensive statement on the magical worldview of Thelema. Harris’s artwork is iconic, from the standpoint of both Tarot history and Thelemic imagery, and the Thoth Tarot is consequently one of the most popular Tarot decks in the world.1)

She was born as Marguerite Frieda Bloxham in London on August 13, 1877, to John Astley Bloxam (1843–1926), a surgeon with Charing Cross Hospital and Lock Hospital, and Jessie Findlay Bloxam née Porter (1851– 1926).2) On April 2, 1901, Frieda married Percy Harris (1876–1952), whose family was friends of the Bloxhams. After a short stint in New Zealand with the family manufacturing firm of Bing Harris and Co., Percy returned to London with Frieda, where, in 1906, he began his forty-plus-year career in politics, including serving in Parliament as chief Liberal Whip (1935–1945). He was created a baronet in 1932, thus making his wife “Lady Harris.”3)

Of Lady Harris’s artwork, her husband wrote, “My wife is an artist and a good one. She takes her art seriously, in fact works at her painting seven days a week and generally twelve hours out of the twenty-four. She has had an immense output of pictures.”4) Her early work includes illustrations for her book Winchelsea: A Legend (1926). Wishing to be judged on the merits of her work rather than her nobility, in her early days she sometimes exhibited under the pseudonym of “Jesus Chutney.” By 1942, her art hung in the Leicester Galleries alongside the likes of Ithell Colquhoun (1906–1988), Henry Moore (1898–1986), Graham Sutherland (1903–1980), and Paul Nash (1889–1946) in the exhibition Imaginative Art since the War.

Lady Harris appears to have been a spiritual seeker, embracing a succession of faiths in her lifetime. Her son Jack recalls childhood lessons in the teachings of Christian Science founder Mary Baker Eddy (1821–1910). Around 1937 or 1938, she studied Anthroposophy and the projective geometry at Rudolf Steiner House under the tutelage of George Adams von Kaufmann (1894–1963) and Olive Whicher (1910–2006). Harris was also a Co-Mason, and designed a set of tracing boards for the Craft degrees of Entered Apprentice (1°), Fellowcraft (2°) and Master Mason (3°) (these paintings survive in a private collection). She became a student of Thelema upon meeting Aleister Crowley in 1937. And in her later years, after doing set design for Ram Gopal’s ballet The Legend of the Taj Mahal (1956), she moved into a houseboat in Srinagar and studied Hinduism.

Harris met Aleister Crowley on June 8, 1937, at the Royal Automobile Club through their mutual friend, writer Clifford Bax (1886–1962). She became a pupil just under a year later, and on May 11, 1938, paid £10.10.0 to affiliate to O.T.O. This indicates that Crowley recognized her Co-Masonic degrees as equivalent to those in O.T.O., and conferred the corresponding O.T.O. degrees upon her without requiring her to take the actual ceremonies. The amount £10.10.0 was the affiliation fee for VII°, which would have made her a Sovereign Grand Inspector General (33°) in Co-Masonry. On this same day, Harris also chose her A∴ A∴ motto, abx [tzaba, “hosts”].

From this point, she provided artwork for several of Crowley’s books, including the Tree of Life dust wrapper for Little Essays toward Truth (1938); the sigil for the cover of Thumbs Up! (1941); Crowley’s portrait on the dust wrapper for Olla: An Anthology of Sixty Years of Song (1946); the cover and frontispiece for Crowley’s funeral program, The Last Ritual (1948); and the cover art for Liber Aleph: The Book of Wisdom or Folly (1962), which was in press at the time of Crowley’s death in 1947 but not actually published for another fifteen years.

On May 5, 1938, Crowley borrowed for Frieda a copy of The Equinox I(8), which is the issue containing “A Description of the Cards of the Tarot.” Reading the paper, Harris suggested that she and Crowley create a deck according to these old Golden Dawn specifications, as none existed. They originally committed six months to completing the project. However, they soon realized that the descriptions of the cards were inadequate, and Harris encouraged him to design

an entirely original pack of cards, incorporating the results of your 39 years of constant study of the subject with your profound—if at times unacceptably unorthodox—knowledge of comparative religion, mathematical physics, philosophy and Magick. Also that you should compose a Treatise explaining the subject in full.5)

Although they met often to discuss the project, they generally worked apart, with Crowley sending her descriptions and concept sketches of the cards, and Harris sending him the finished paintings for approval. This working arrangement would tax their relationship, as Crowley was very particular about the cards and required Harris to do new versions of over a dozen cards. Sometimes one or two revisions would satisfy Crowley, but in some cases it took more. To cite the most extreme example, Harris painted seven versions of The Magus before arriving at one that Crowley deemed acceptable. After five years of agonizing over details of imagery, mood, and the corresponding color scales, the Thoth Tarot was finally completed. A handful of public and private showings followed, with the companion volume The Book of Thoth appearing in 1944. Reflecting on the project, Crowley wrote, “It is the vindication of my life’s work for the last 44 years; and will be the Compass and Power of the good ship Magick for the next 2,000 years.”6)

Despite several plans over the years to produce a full-color deck, none of these ever appeared in the lifetime of either principal. Following Crowley’s death, Harris defended their joint legacy from inferior reproductions, at one point cautioning Llewellyn Publications against doing a deck recolored from The Book of Thoth’s black and white plates:

It is almost certain to be a travesty as Mrs. Barker is most unlikely to notice in each case or to draw correctly the sigils concealed in the designs, while she will not have the knowledge to combine the four traditional colour scales in their right proportions and balance. The result in either case will be to destroy the magical properties of my Pack.7)

Harris would die in Srinigar in 1962, not long before penning these words. It would be 1971 before Llewellyn Publications would issue the first printing of the Thoth Tarot, based on full-color photography of Harris’s original paintings by Grady Louis McMurtry.

You’ll find this essay with references and footnotes here: https://hermetic.com/sabazius/frieda-lady-harris