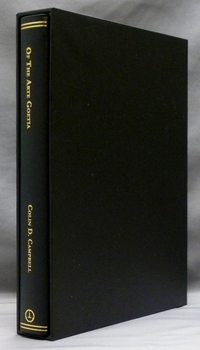 Teitan Press has just announced the release of Colin D. Campbell’s Of the Arte Goetia, in which Campbell examines the evolution of The Goetia from the proto-Goetia of Wier’s Pseudomonarchia Daemonum, through the first English translation in Scot’s Discoverie of Witchcraft, to the English-language manuscripts from which most modern editions are drawn. Reproducing significant passages of these source texts side-by-side, Campbell highlights their differences and corrects numerous errors, lacunae or redactions. He also illuminates obscure internal references, whose meaning only becomes apparent in light of the text’s historical development. This historical/textual exploration concludes with a short chapter on the practical applications of this material.

Colin Campbell is an O.T.O. member whose books include The Magic Seal of Dr. John Dee: The Sigilum Dei Aemeth (2009) and A Concordance to the Holy Books of Thelema (2008). His ongoing research on The Goetia has been the subject of presentations at the National Ordo Templi Orientis Conference. You can read his papers “Diabolism! A Short History of Goetia” and “The Offices of Spirits” in the latest NOTOCON proceedings book, Neither East Nor West. (You can read all about Neither East Nor West at this post on Zero Equals Two!)

Of the Arte Goetia is available in two hardcover editions. The Standard Edition ($60), limited to 720 hand-numbered copies, is a small quarto (6 3/4″ x 8 3/4″ ) of 280 pages plus 8 pages of prelims, which include diagrams and seals. It is bound in high quality black cloth with blind rules and gilt-stamping on the front cover and spine, with black endpapers. The text is printed and sewn on acid-free paper. The Special Edition ($130) adds a heavy black cloth slipcase with an original hand-drawn seal of one of the Spirits of the Goetia housed in a pocket at the rear of the volume. Each of these 72 copies is designated by the name and number of the Spirit, and is signed by the author.