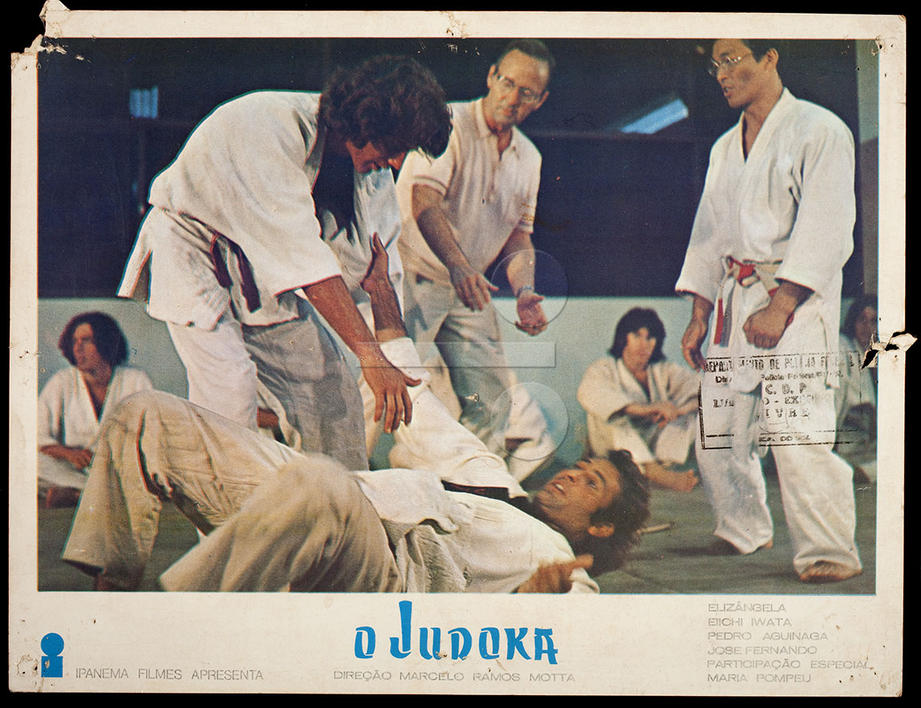 Most within the Thelemic community will be familiar Motta’s name and writings but few are aware that he is maybe best known in Brazil for his work in film – albeit short lived.  Motta tried his hand in both writing and directing films in the 70’s and 80’s and his film “O Judoka” remains a bit of a Brazilian cult classic.

“O Judoka” – meaning the Judo fighter was a comic book published by EBAL between 1969 and 1973.  The series first hero was “Mestre Judoka” (Judo-master), a character belonging to Charlton Comics and currently to DC Comics, (the owners of Batman and Superman).  However, after a short 10 issue run the original Judo-master comic book series was cancelled in the United States.  The solution for the Brazilian EBAL, who wanted to continue with the series, was to slightly alter the heroes name and create a new comic book based upon “O Judoka”.  (To view full issues of this comic book click here).

In 1973, O Judoka was released as a movie, directed by Marcelo Motta making it the very first Brazilian superhero movie and for this reason, though it is not considered to be a good film, it has maintained a following and earned a special place in Brazilian movie history.  The comic book series has gone thru a revival and continues to be popular today, in fact there is a Facebook page dedicated to O Judoka which can be found here – Judoka on Facebook

The following synopsis of the movies plot was provided by a web page maintained by the Brazilian government wherein they catalog old movies. (to view this page click here)

Carlos is a student of architecture attending college while dating a girl by the name of Lucia. One day, while walking near Lucia’s house, an ex-boyfriend of hers and his gang beats Carlos up. Then on his way home Carlos saves, and old Japanese man named Minamoto from being hit by a car. This old man happened to be a Judo master and being grateful of Carlos aid offers to instruct him. Thus, Carlos starts to take Judo classes in Minamoto’s gym and soon becomes the superhero known as “O Judoka”.

The following excerpt is from an article published in an issue of O Judoka in which members of the cast discuss what it was like working with Motta and it sounds spot on from what I know of him and his work in A∴A∴. In this image from the film Motta can be seen in the middle (w/glasses).

Marcelo Ramos Motta is a “good guy” producer – placid, delicate and kind. Almost never loses his temper, and when he does, it does not last more than a few seconds. Nevertheless, he is demanding and rigorous during shooting. He buys dinner for his team and jokes with everybody, but in his shots – he wants realism; not “childish simulations”.  He believes that “Artists must suffer” and wants his films to transmit authentic emotions to the viewer, without exaggerations, in precise shots.

One particular scene was re-shot many times, because the “bandits” did not know how to “properly get beaten”.  After all, a good “bandit” must know how to be beaten by the “good guy”, with class.

The full article can be viewed by clicking here.

From this point forward, Motta’s movie career took a turn for the worse and never really got off the ground.  Though he managed to direct at least one more film of the pornographic variety and is credited as a writer in at least two more films.  Details of his complete Filmography can be found here at IMDb –

I would like to give a special thanks to my Brazilian buddies who continue to inform me on Motta’s true history.  Over the last several years I have established relations with several of his A∴A∴ claimant groups both in America and Brazil resulting in over 300 hundred letters being shared with me from his archives and the more I learn about the man the more I am fascinated with his history.  I hope in the near future to be sharing much of this new material with the Thelemic community regarding Mr. Motta who is undoubtedly one of the most influential Thelemites to have ever lived.  His story remains greatly unknown and certain aspects of his life have been mis-represented due to the fact that historians have thus far only had small fragments of his archives to work from. – stay tuned and have patience as this will take some time to flesh out.